In my first piece from the archives I featured our most famous member, Sir Patrick Moore, now sadly no longer with us. There is no doubt that he was one of the Association’s most gifted observers. In this feature I am going to feature a much less gifted one, myself!

On the 20th March 2015 a total eclipse will take place in the North Atlantic. Many members will already have made their travel plans to see it, be it from a cruise ship off the Faroes or from Svalbard to name a couple of destinations. As you may know the BAA produces DVDs of these events, which can be purchased from the BAA, which have contributions from Members who recount their eclipse experiences. See http://www.britastro.org/shop_section/48  for further details. I have now seen several eclipses over the years but my first one was the infamous August 1999 one. Such high hopes for Cornwall, sadly dashed by clouds for many. Below is my contribution to the DVD. Amazing to think that this is now just over 15 years ago.  I hope you like it.

Having decided that I wanted to see the August 1999 total eclipse in Cornwall, we (my wife and I) booked into Rick Stein’s Seafood Restaurant in Padstow back in 1996. We decided to kill two birds with one stone, so to speak, because we also enjoy seafood.

On the 9th August we drove to Dawlish, Devon, where my wife’s parents live to spend the night. On the afternoon of the 9th, we walked to Teignmouth and took a boat over the estuary to Shaldon. The edge of totality passed right along this estuary and by going over to Shaldon we were going into the path of totality. My in-laws’ house in Dawlish was to have a 99.9% partial. The next morning, leaving our younger son with the grandparents, we drove to Padstow very early. Our eldest son had decided to stay at work back in Somerset. The weather was overcast but we were hopeful. Traffic was very light and as we neared Padstow, we came across many sites that had obviously geared up for hundreds, if not thousands, of people, that had only a handful of people actually there.

We arrived and duly signed in. Padstow was heaving with people and the harbour was crammed with boats. Our room was right at the top of the restaurant and we had a balcony that looked right out over Padstow and the Estuary. The weather looked hopeful and there was an expectant mood in the air. We decided to go for a drive. I particularly wanted to pop into Truro School and see what was going on with the BAA preparations which we duly did, again finding an optimistic atmosphere that all would be well the next day. We also drove through Newquay and on to Trevose Head where we spent several hours walking along the clifftops in perfect sunshine. We were feeling that the forecasters had got it all wrong. 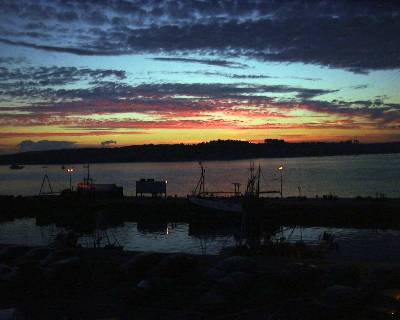 That evening we had a meal at the Bistro that was excellent and then went back to the room to get ready for the next day. I had a pair of 11×80 Celestron binoculars with me and a couple of cameras. I had checked out the binoculars with the mylar filters that I had made and had seen several good sunspot groups on the Sun.

I couldn’t sleep very well and every hour or so I kept going out onto the balcony to look at the sky. It was cloudless and I could hardly believe that we may actually see the eclipse. Dawn came and it was still quite clear. I took several shots of sunrise which was dramatic.

Unfortunately the cloud was slowly coming in from the West and by about 9 am it looked ominous. We decided to stay put because it seemed fruitless to chase around the countryside with possibly hundreds of others and if it got very cloudy we had just as much chance of being in a clear spot as anyone else. We also had a TV in the room and put the BBC coverage on to watch. At least we would see totality on that. 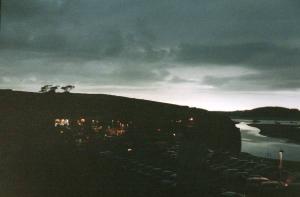 Padstow slowly came to life and in the distance we could see people walking in lines up to all the tops of the hills roundabout. It was quite a sight and we felt we were part of something bigger than us. First contact came and went. We only knew because they told us on the TV. The sky was completely overcast and all we could see was thick cloud with the odd thinner patch. Totality approached and it started getting darker and colder. Staff in the surrounding hotels, etc. started coming outside to see the eclipse. The light levels seemed to suddenly darken and suddenly totality was upon us. I was overtaken by emotions. I couldn’t see my hand in front of my face: it was so dark and I was looking into the room at the TV, and yelling ‘look at the prominences, look at the prominences’. I remembered to take one or two pictures. These looked northwards across the estuary. Flashbulbs were going off all over the place and on the surrounding hills. Someone let a large firework off at mid-eclipse which set all the birds off.

Totality, about 1 minute 7 seconds where we were, ended and it grew light again quickly. I had the distinct impression of seeing the edge of darkness fly up a warehouse wall at astonishing speed. It was all over. I had not seen totality and was very disappointed. What we had seen was dramatic and my wife, not an astronomer, was overwhelmed by it all. I have come to realise now that I was privileged to be in the path of totality, but at about midday on the 11th August, I was very disappointed. 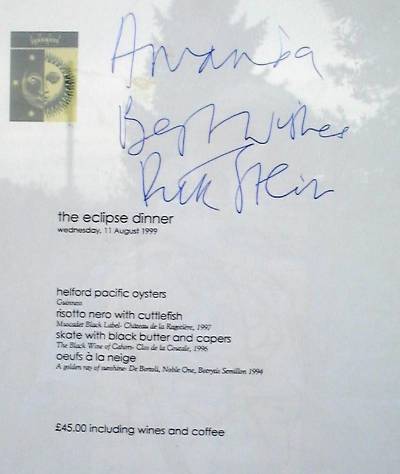 We spent the rest of the day doing the usual touristy things and that night plumped for the Eclipse Dinner in the Restaurant. The menu is shown below. Rick was there and I was lucky enough to get his autograph on the menu. This has been framed and is now on our kitchen wall!

The next day we left to drive back to Dawlish. When we got there we found that they had had an excellent view of all the partial phases, and that hundreds of boats had moored offshore on the morning of the eclipse. The sight of all the boats and flashbulbs going off had been spectacular.

This then was our eclipse experience. I am glad to have been within the path of totality but I am more keen than ever to actually witness a total eclipse in clear sky. I am glad to report that my mother saw perfect totality in Austria. She is Austrian and the centre line of totality only passed some 4km from the village where she had been born and brought up. One of my sisters took my advice and went over to France from Romney, Kent where she lives and also saw totality.