Dave Grennan (Dublin) has discovered a potential supernova in NGC 5410. This was first reported as PSN J14005449+4058596 on CBAT’s Transient Objects Confirmation Page on 2014 April 18 and it is now known officially as SN 2014AS. The first confirmation reported on TOCP was from Stan Howerton who reported a magnitude of 17.0 based on Sloan g and r band reference stars. Early the next evening (April 19th) Denis Buczynski (Tarbatness) obtained the image below and reported the object as magnitude 16.0R. He also reported the position as RA=14 00 54.49, Dec+40 59 00.7 (J2000).

The object has been spectroscopically confirmed as a Type Ic SN, details are available on Astronomers’ telegram 6081. NGC 5410 is in Canes Venatici and so it is well placed for observation at the moment.

Amateur spectra of this object by Robin Leadbeater are discussed in this BAA forum thread. 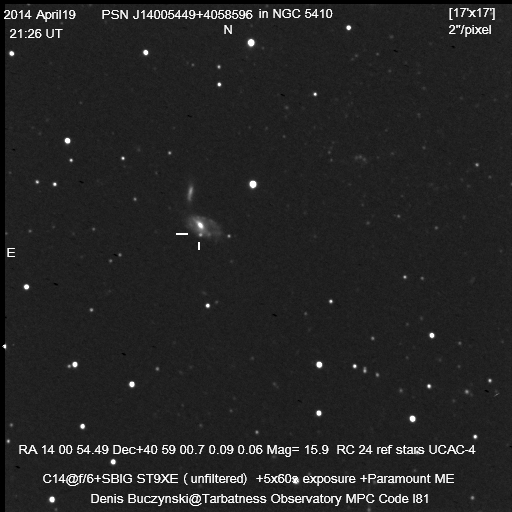