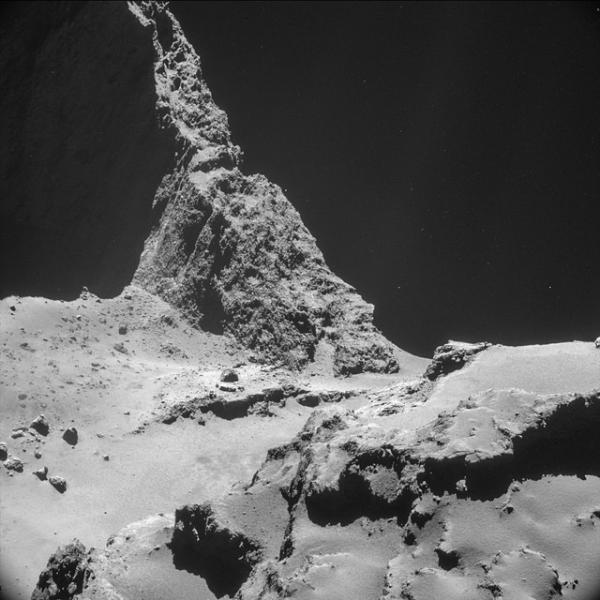 From images taken during the descent and sent back yesterday we know that Philae touched down within 100m of the centre of the 1km wide error ellipse at Site J (now called Agilkia) on the small lobe of the nucleus. This was a pretty amazing accuracy given that the probe had fallen in the comet’s gravity field for 7 hours as the nucleus rotated below. Unfortunately,  given all the effort that had gone into selecting the landing site, it didn’t stay there for long. The landing legs absorbed most of the incoming 1 m/s motion but there was no downward push from the ADS thruster (this couldn’t be primed before release) and the harpoons didn’t work. The surface must also have been quite hard as the lander bounced off with an upwards velocity of around 38 cm/s and spent two hours flying over the comet’s surface to a peak altitude of around 1km. This explains why engineers and scientists had real trouble interpreting their data yesterday.

After this unscheduled journey the lander bounced again, this time leaving the surface at only around 3cm/s and it finally came to rest 7 minutes later against a steep slope. Communication was lost shortly afterwards as Rosetta set below the local horizon. Communications sessions generally last around 4-5 hours every 12 hour cometary day as Rosetta orbits above.

This morning communications were re-established at 0601 UTC as Rosetta came into view and everything appeared to be working very well except for the fact that the lander was on a steep slope with one leg off the surface. The final resting place is still not certain but it looks to be around 1km from the original landing site. Those science experiments that didn’t require mechanical movement were working well and the CIVA camera system has sent back images showing the surface, horizon, sky and one of the lander footpads. All of the data is transmitted back through a link with a capacity roughly equivalent to that of a very old computer phone line modem (around 1-2 kbps).

One of the problems with the final landing site is that the lander solar panels are only generating power for around 1.5 hours every cometary day. This means that the lander battery will not be charging and so the mission could be limited to the primary battery supply which may be exhausted by Saturday. The mission control team at ESOC are some of the cleverest people on this planet so they will be thinking of innovative solutions to this problem but they don’t want to do anything now that would jeopardise the current science mission.

The latest communications session started at 1927 UTC tonight and will last to 2347. This pass will include the first use of the MUPUS sensors.