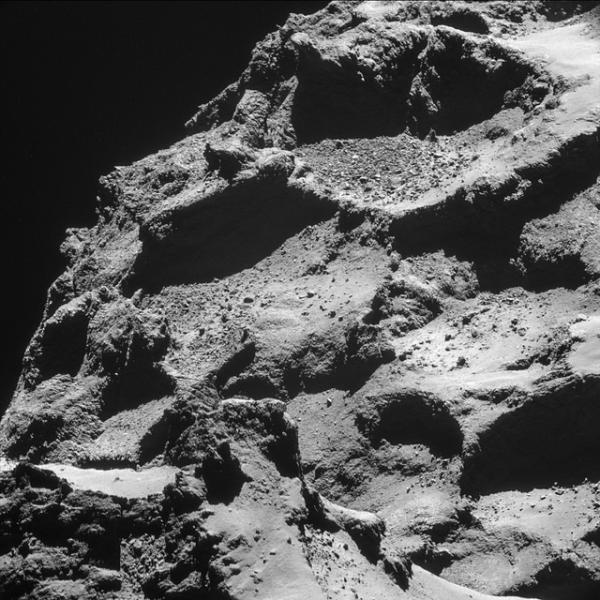 I’m writing this late on the evening of landing day. Here’s a short summary of the day.

One of the key challenges of the Rosetta mission was always going to be the successful landing of Philae on the comet 67P. Landing on a comet that has an escape velocity of around 0.5 m/s is a real problem since there is very little gravity to hold the lander on the surface. Philae had a downward pointing thruster (the Active Descent System or ADS) along with a harpoon which would hold the lander on the surface for long enough that screws in the feet could be driven in to anchor the spacecraft.

The lander has no way of controlling its trajectory. It is ejected from Rosetta by a mechanical arrangement that imparts a velocity of around 0.2 m/s and then it falls in whatever direction Rosetta aims it. This meant that the trajectory of Rosetta before separation was critical. In the days before the landing detailed measurements were done to determine the orbit and 2 hours before planned separation a critical manoeuvre was performed to put Rosetta on the delivery trajectory. Telemetry from the spacecraft confirmed that this had gone as planned and a final “Go” was given for separation.

During the night before release engineers had not been able to prime the ADS thruster. It was decided to go ahead anyway given that there was very little probability of resolving the thruster problem and the landing would get harder as the comet became more active.

Separation of the lander was confirmed in Rosetta downlink telemetry at 09:03 UTC. Up to that point telemetry from Philae had been routed through an electrical umbilical but this was now disconnected. From now on Philae would relay its data via a radio link with Rosetta. Rosetta would then transmit the data to the ground. Philae was now falling towards the rotating nucleus at around 0.9 m/s from a release altitude of 22.5 km. It would take around 7 hours to fall to the surface. Just after separation both Philae and Rosetta took images of each other but these images would not be sent back to the ground until later.

Shortly after separation Rosetta, which then was on a collision course with the nucleus, performed a deflection manoeuvre to put it on a trajectory which would avoid collision and give it better radio link coverage of the lander. As expected, this led to a loss of contact with the ground. Near to the predicted time, just after 11:00 UTC the radio signal was acquired and there was confirmation that Rosetta was receiving good telemetry from Philae. Shortly after that we had confirmation that the lander’s legs had deployed, the flywheel was operating and it was in a stable attitude. Rosetta also started to send back the post-separation images that had been taken earlier.

Good telemetry was received throughout the descent but things got very tense as the expected landing time approached. Confirmation of the landing would come via the Philae telemetry that was being relayed back via Rosetta. After a nail-biting wait the landing was confirmed at 16:03 UTC. Philae continued to send back data but there was some confusion about how stable it was on the surface since interpretation of the telemetry was difficult. The deflection of the landing gear indicated a gentle touchdown but the harpoons, which had been intended to operate on landing, did not work. Subsequent fluctuations in the level of the radio signal and, more importantly, in the output from the solar panels, implied that the lander may have bounced off the surface and spun slowly due to the spin-down of the flywheel. This apparent lander spin stopped after around two hours.

During periods of good communication Philae started to send back science data including images obtained using its downward pointing ROLIS camera during the descent. These showed that the surface at the landing site was actually reasonably flat and that the (first) landing was very close to the centre of the error ellipse.

Philae is now out of radio contact since Rosetta no longer has visibility of the landing site. We will have to wait until tomorrow for more information.

Image credit: Rosetta / European Space Agency. One of the first images returned by the Philae lander of the surface of comet 67P.