Powerful storms erupt in the atmosphere of Uranus! 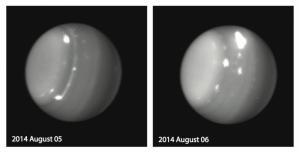 Astronomers using the Keck telescope in Hawaii have discovered a massive storm raging in the atmosphere of Uranus.  The two images taken on  2014  August 5 and 6, show a series of small storms along with a very large one in the planet’s  upper atmosphere, quite unlike anything seen before.

Both of the above images were taken by astronomers Imke de Pater (UC Berkeley), Larry Sromovosky and Pat Fry (U. Wisconsin), and Heidi Hammel (AURA).  They used the near-infrared  camera NIRC2 at a wavelength of 1.6 micron, with adaptive optics on the 10-m Keck II telescope.

Uranus is an ice giant with an upper atmosphere consisting mostly hydrogen, helium and methane.  Unlike the gas giants (and its ice giant twin, Neptune) Uranus’ atmosphere was thought to be rather quiet, however the recent images show the planet is quite capable of producing powerful storms, and may not be as bland as previously thought.

Uranus is something of an oddity in the solar system. It has an axial tilt of 98 degrees making the days and seasons quite different from the earth’s.  Currently, the north pole of the planet is slowly pointing towards us, while the south pole of Uranus is hidden from view.  Short lived storms are have been observed before: a number were seen when the planet passed through its equinox in 2007 but they then quickly dispersed.

BAA observers with large telescopes (200mm or more) should try observing the planet to see if anything can be detected. Images taken in the IR part of the spectrum would be particularly useful. Uranus currently resides in the constellation of Pisces and culminates at around 0255UT making it a late evening/early morning object.  All observations should be sent to the Saturn Section.