National Astsronomy Week (NAW) 2014 took place from March 1–8, under the heading “Target Jupiter”, to mark the highest UK apparition of the giant planet for 12 years. The BAA was considerably involved with the funding and organisation of NAW 2014, which aimed to increase public awareness of astronomy and space, and to get people of all backgrounds looking up, and the week was as great a success as could have been hoped, with over 200 events organised by astronomical societies, schools, colleges, and other groups, up and down the country.

The BAA’s own “Target Jupiter” observing event took place, slightly after the actual week, on March 21, in Regent’s Park in London, in collaboration with the Baker Street Irregular Astronomers (BSIA), who hold monthly observing events there, at The Hub, a café and sports changing building in the centre of the park, which is as far from most artificial lighting as it is possible to get in central London.

The originally booked day of Thursday 20 was forecast to be cloudy by the beginning of the week, so the date was changed to the Friday, which was foruitous. Despite a shower of rain about 18:30 and a chilly wind, the sky thereafter improved, and the equipment brought by BAA and BSIA members, ranging from binoculars to a 16-inch hand-made Dobsonian telescope, was set up, giving about 200 members of the public views of objects including Jupiter, Mars, the Orion Nebula, and double stars.

I was demostrating using a 100mm ED refractor on a driven equatorial mount, and, with a maginfication of 160, I found that most members of the public who looked through the scope were able to see the Great Red Spot on Jupiter, which transited about 19:00, in the moments of less wind. Later I pointed the telescope at the close binary Algeiba, and lastly at Mars, which, though still rather low, revealed its South Polar Cap to viewers. People who had not looked through astronomical telescopes before were generally thrilled and amazed that they could see such details on the planets using a portable telescope from Central London. There was often a queue of people waiting to look through the ‘scope, and there was a longer queue of people wanting to see through the 16-inch “light bucket”.

The highlight of the evening was the raffle draw. For £2 a ticket (money going towards the cost of using the Hub for the monthly BSIA mewetings) attendees stood the change of winning some small prizes, including a laser pointer and books, and a first prize of a Celstron NexStar 127 SLT computerised Schmidt-Casegrain telescope (worth £469), donated by The Widescreen Centre and the BAA. The prize was won by a delighted Chantel Campbell. Chantel said, “I’m an astronomy novice and it was my first time attending a BSIA meeting. Everyone was so welcoming and willing to share their knowledge it’s fuelled my enthusiasm. I’m looking forward to using my telescope and sharing it with the group.” Chantel aslo accepted an invitation to come to the next BAA meeting (on March 26). 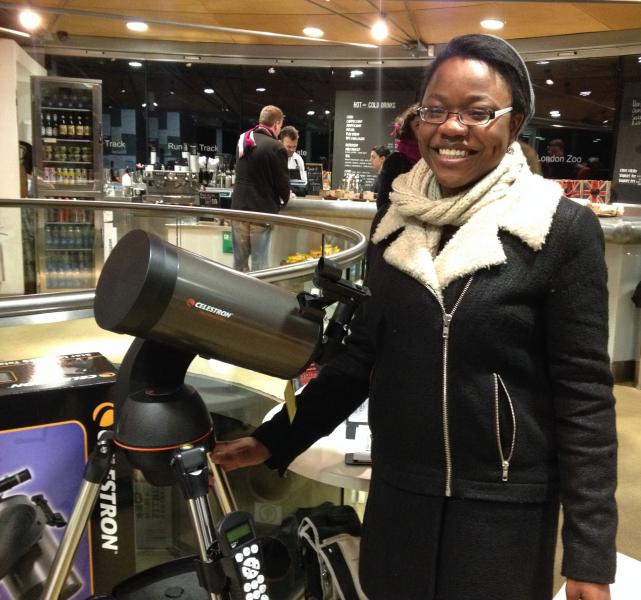 Chantel with her new telescope, donated jointly by the BAA and The Widescreen Centre

Stacks of BAA and BSIA leaflets were distributed, and observing went on until 22:00, when it clouded over. It started raining again at about the point where all the telescopes where packed up at 22:30. It was a successful conclusion to NAW 2014 from the BAA’s point of view, and we expect to continue to collaborate with the BSIA form time to time on such observing events in London.