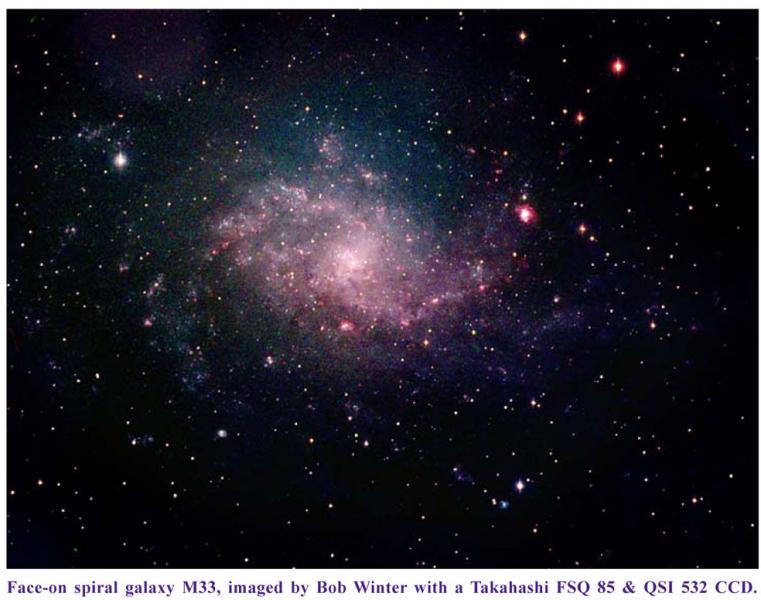 In the north the brilliant Vega, the brightest member of the Summer Triangle, is skimming the horizon whilst the faintest partner in that group, Deneb, is still 20° high. The tail of the Great Bear points downwards as the constellation climbs on the eastern side of the meridian. Directly opposite it lies the much less conspicuous shape of Cepheus, and between the two, the Little Bear hangs by its tail from the Pole Star. Immediately above the celestial pole is the faint constellation of Camelopardalus which, despite being the eighteenth largest by area in the sky, contains no stars brighter than fourth magnitude.

As we look east we find that Leo and the head of Hydra have just risen. Immediately above the water snake’s head lie the faint and indistinct stars of Cancer. Cancer contains one of the best known open clusters, the Beehive or Praesepe, designated M44 by Messier when he compiled his catalogue of fuzzy objects to avoid when searching for comets. When Galileo observed the cluster he noted forty stars with his new telescope, though today we know of at least one thousand group members. The cluster is 95 arcseconds across, meaning it is three times the size of the full Moon, although it is quite diffuse.

The other open cluster in the Crab is M67, considerably fainter than the Beehive being only magnitude 6.9, which places it a little below naked eye visibility. If you have good eyesight, why not look for the constellation of Lynx that at this time of year presents itself as a nearly vertical line of faint stars above Leo and between Ursa Major and Gemini.

The south is dominated by the brilliant display of winter constellations that are in such contrast to the previous incumbents of the meridian, Eridanus and Cetus. Orion is just approaching the meridian whilst above him Aldebaran, the red eye of the Bull in mythology, is upon it. One of the most photogenic of objects is M42, the Great Orion Nebula, within which we find the four stars that make up the well known ‘Trapezium’. Above them both lies Auriga with brilliant Capella just 7° from the zenith.

Turning to the west we see that the western extensions of Pegasus are on the horizon although Andromeda points towards the zenith and M31 is still some 50° in altitude. At mag 3.4 it is a naked eye object, but photography really brings out the best in it. It is an excellent target for the DSLR user who can take numerous exposures and then stack them. You will also be able to record two of M31’s satellite galaxies: M32 and M110. Also in Andromeda at mag 5.7 is the large open cluster NGC 752, which has around sixty members.

Not too far from the Andromeda spiral lies M33, known as the Triangulum or Pinwheel galaxy, which is a spiral galaxy that is face on to Earth, but much more difficult to detect due to its low surface brightness.

Mercury provided us with the best morning apparition of 2013 last month and following a superior conjunction on Dec 29, it will move east of the Sun to give us one of the best evening apparitions of 2014. On Jan 31 the planet will be at an elongation of 18° from the Sun and amongst the stars of Aquarius. On that evening, at the end of civil twilight, Mercury will be 9° above the west-south-west horizon at a magnitude of 0.7. The thin sliver of a crescent Moon less than one day old will be 7° to the west and a little lower in the sky. Use binoculars!

Venus reached greatest eastern elongation on Nov 1 but was poorly placed as seen from the UK. However, despite its elongation decreasing, the gradually changing angle of the ecliptic places Venus a little more favourably in December for those in northern temperate latitudes. On Dec 1 with the Sun 6° below the horizon the planet is at an altitude of 11°. By mid-month this figure is 12°, but by Dec 31 it has shrunk to just 7°. Venus is at its most brilliant on the evening of Dec 10 when it shines at mag 4.7. The planet then moves briskly closer to the Sun with inferior conjunction occurring on Jan 11. By the end of January it is a morning object rising two hours ahead of the Sun.

Mars is a morning object in Virgo rising at 01:00 UT as December begins. This constellation will be its home for the majority of 2014. The planet’s magnitude is increasing steadily from +1.2 currently to +0.3 at the end of January as it heads for an April opposition. Its apparent diameter is also on the rise reaching 14.5 arcseconds by the end of the period, at which time it will be rising some 45 minutes before midnight.

Jupiter is now a superb evening object in the east, rising at 18:45UT at the start of December. It is approaching opposition on 2014 Jan 5 when its magnitude will be a magnificent 2.6. On that night it will have an apparent equatorial diameter of 46.8 arcseconds and will culminate a few minutes after midnight at an altitude of just under 61.5°. All of these things will make it a very attractive target for planetary imagers. Jupiter will of course be the ‘must see’ attraction of National Astronomy Week which runs from March 1 to 8 in 2014.

Saturn, having passed through solar conjunction in early November, is a morning object in Libra as December begins, rising two hours ahead of the Sun. By the beginning of January this has stretched to four hours and by the end of the month the planet is rising at 02:00UT. Its brightness remains static at +0.6 but its apparent equatorial diameter increases from 15.4 to 16.5 arcseconds. It will be early March before it technically becomes an evening object, after which it moves towards an opposition in May.

Uranus is an evening object on the Pisces/Cetus borders at the beginning of the period at mag 5.8, straying slowly into Pisces as the months progress. The Sun catches up with Uranus and is in conjunction with it on April 2. The planet reaches opposition in early 2014 October.

Neptune, at mag 8 in Aquarius, is also an evening object at the beginning of December, setting around 22:30UT. By the end of the period it sets two hours after the Sun. The main-belt asteroid Juno passes within half a degree of Neptune on January 6.

The winter months see us spoiled for meteor activity with three notable showers to hold our attention during the long and cold winter nights.

The Geminids are one of the strongest of the year’s showers with estimates of observable events being high. They are active from Dec 08 to 17 with maximum occurring in the early hours of Dec 14 when the ZHR could reach 100. The radiant lies just above the ‘Twins’ and has reached 45° in altitude by 22:00 UT. Unfortunately the Moon will spoil the party to some extent this year, as on the night of maximum it is waxing gibbous in nearby Taurus. The Moon will have set before 05:00 UT, leaving the radiant at a very respectable altitude of 55°.

The Ursids are a much under-observed shower and would benefit from increased watches despite the proximity of the festive season. They are active from Dec 17 to 25 and reach maximum during Dec 22 to 23. The Moon, a waning gibbous, again interferes rising at 21:30 on the night of Dec 22 although in angular terms it is some way from the radiant.

The Quadrantids, another under-observed shower, are active from January 01 to 06 with a peak on Jan 03. This year the Moon is a slim waxing crescent and does not interfere.

In the table I’ve listed events for stars to magnitude 7.0 although there are many others that are either of fainter stars or those whose observation may be marginal due to elevation or other factors. DD = disappearance at the dark limb, whilst RD = reappearance at the dark limb. The column headed ‘mm’ indicates the minimum aperture required for the event. Times are for Greenwich and in UT.
Five possible graze occultations occur during the period. The event on Dec 13 is favourable due to the distance of the star from the bright cusp, but unfortunately on this occasion the Moon is 83% illuminated which will make observations more difficult. More details including graze tracks are available in the BAA Handbook.

The map shows the position of comet ISON at five day intervals during December following its perihelion on Nov 28. The comet then travels north between Hercules and Boötes, into Draco and passes within a few degrees of the north celestial pole on Jan 7 before heading away via Cepheus and Camelopardalis. Latest reports suggest that it is still intact and brightening although in the world of comets, things can change very quickly. The BAA Comet section has the ephemeris for this and other comets on its website at http://www.ast.cam.ac.uk/~jds/