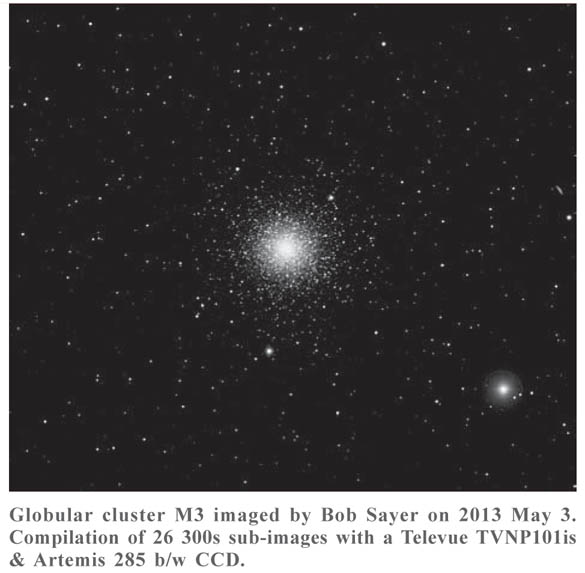 In the north Ursa Major is heading towards the meridian with the ‘paws’ of the bear almost at the zenith, whilst on the other side of the overhead point lies the faint constellation of Lynx. It has only one star with a Bayer classification, alpha at magnitude 3.1, which explains why it is so inconspicuous. It reaches from Camelopardalis, around the feet of Ursa Major, and could easily have been joined to Leo Minor which lies at its other extremity. Rather surprisingly, one of its stars is designated 10 UMa. This is due to its originally lying in an area of sky that was allocated to Lynx before the IAU’s boundary reorganisation in 1930. With Lynx close to the zenith, now is a good time to try and identify its elusive shape.

Camelopardalis, despite being the 18th largest constellation by area, can only muster a star of magnitude +4.03 as its brightest. Two of the stars of the Summer Triangle, Deneb and Vega are skirting the northern horizon with Deneb almost exactly due north at this time.

Looking east, Arcturus and Corona Borealis are climbing away from the horizon and the bright star Spica has risen. Close to Spica, the planet Mars is now an evening object and by the end of March will be nearly 30° in altitude by midnight.

Between Virgo and Ursa Major lie the two small constellations of Coma Berenices and Canes Venatici. The latter is home to the globular cluster M3, an excellent example of the genre at magnitude 6.3. For most this is just below naked eye visibility but binoculars or a moderately sized telescope will resolve it. Also in the same area of sky is the Whirlpool Galaxy (M51) which, at magnitude 8.4, is best seen with apertures greater than 210mm.

To the south we find Cancer on the meridian with the open cluster variously known as M44, The Beehive, Praesepe or NGC2632 culminating at an altitude of almost 60°. As with many clusters of this type it covers a comparatively large area of the sky, and in this case it spans some 95′. Below Cancer and also on the meridian lies the head of Hydra (the Water Snake) whose body winds southeastwards until it passes below the horizon. If your view to the south is unobstructed see if you can find any of the stars of Pyxis (brightest is alpha at mag 3.7) which is also on the meridian. 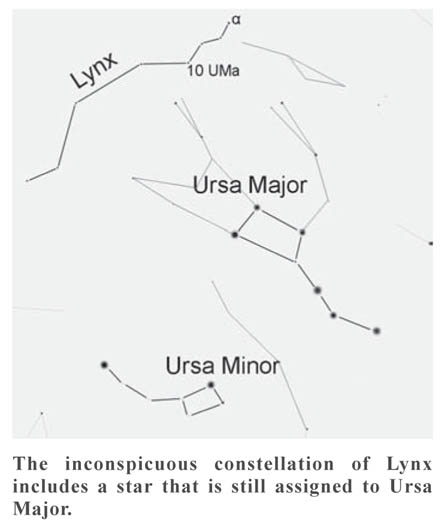 Turning to the west those doyens of autumn, Pegasus and Andromeda, are disappearing as are the large and faint constellations of Cetus and Eridanus. Taurus, with Aldebaran, and Auriga, containing Capella, are all still visible but past their best although Capella is still 60° above the horizon. The trio of open clusters, M36, M37 and M38 are well placed as is their fainter neighbour NGC 1857.

Mercury passes through inferior conjunction on February 15 and moves west of the Sun to become a morning object. For UK observers it is so poorly placed that it is unobservable even on March 14 when at greatest western elongation. On this date, with the Sun 6° below the horizon, Mercury is less than one degree above it. The planet then heads for a superior conjunction in late April.

Venus is a brilliant morning object in the south eastern sky as it approaches maximum brightness of 4.5 on February 12. After this it fades very slightly as it moves towards greatest western elongation on March 22 when the planet will be, in angular terms, 47° from the Sun. At the start of February Venus rises two hours before the Sun, although due to the angle the ecliptic makes with the horizon, it is never very high. It maintains this separation in rise time until, at the end of March, it has shrunk to one and a half hours as it moves closer to the Sun once again. On the morning of February 26 the Moon passes just 0.4° south of Venus as seen from Greenwich. From other locations around the world an occultation will be seen. Then on March 27 the Moon passes north of the planet but this time with a less impressive separation of almost 3°.

Mars rises forty five minutes before midnight at the start of February, though by the end of the period this has become 20:15 UT. The planet begins the period moving direct in Virgo but on March 1 it reaches its first stationary point, after which it travels retrograde until May 10. Mars is steadily increasing in brightness and apparent size as it moves towards opposition on April 8. During February and March its apparent magnitude rises from +0.2 to 1.3 while its angular size has grown from 8.8 to 14.7 arcseconds.

Jupiter is just past opposition but still a striking object in the evening sky amongst the stars of Gemini, despite its brightness falling slightly from 2.6 to 2.2 over the period in question. At the start of February the planet culminates around 22:00UT at an altitude of 62° but by the end of March this occurs in daylight but Jupiter is still visible until after 03:00UT.

Saturn is currently in Libra and begins February in direct motion but reaches its first stationary point on March 3 after which it travels retrograde. It is approaching opposition in early May so its brightness will increase very gradually from +0.5 to +0.2 and its apparent size will rise from 16.5″ to 18.1″ over the period. The tilt of the rings remains fairly constant at just under 23°.

Uranus is an evening object at mag 5.9 in Pisces, close to the border with Cetus. By the beginning of March it will be lost in the glare of twilight as it heads towards solar conjunction in early April.

Neptune in Aquarius is swallowed up by the solar glare and reaches conjunction on February 23. By the end of March, despite being some 34° west of the Sun, it rises less than an hour ahead of it.
(1)Ceres and (4)Vesta lie close to Mars in Virgo only 4½° apart and rising a little before midnight as the period begins. Their separation decreases gradually until they pass less than 2½ minutes apart on July 14.

In the table I’ve listed events for stars down to magnitude 7.0 although there are many others that are either of fainter stars or those whose observation may be marginal due to elevation or other factors. DD = disappearance at the dark limb, whilst RD = reappearance at the dark limb. The column headed ‘mm’ indicates the minimum telescopic aperture required for the event. Times are for Greenwich and in UT. 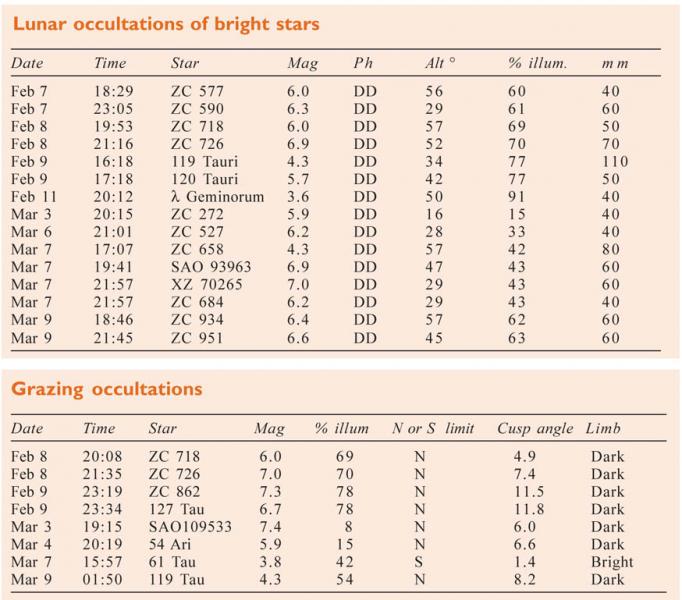