The sky in August and September 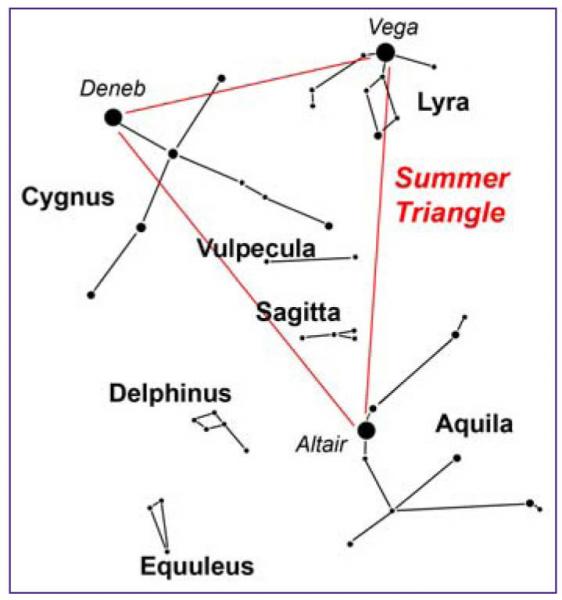 In the south Deneb, the brightest star in Cygnus, is on the meridian just a few degrees from the zenith. Part way along the body of the Swan lies NGC 6871, an open cluster 20 arcminutes across at magnitude 5.2. Below the Swan is a string of small constellations that reach from the double star, Albireo, across the meridian to the head of Pegasus, the winged horse. They are, from north to south, Vulpecula, Sagitta, Delphinus and Equuleus of which the middle two are the most obvious. What items of interest can these star groups claim?

Vulpecula (the fox) contains the planetary nebula M27 or NGC 6853, the Dumbbell, whose magnitude is 7.6 but requires a minimum of 200mm to give substance to its shape. Also in that area is the well known ‘coathanger’ asterism, more correctly known as Collinder 399, that lies close to the southern border with Sagitta. It is an easy object in binoculars and can be located by using Altair and Tarazed (γ Aquilae) as pointers.

Sagitta (the arrow) is a tiny constellation, in fact it is the third smallest of a total of 88. It contains three faint planetary nebulae plus a globular (M71 at magnitude 8.3) and one open cluster, H20, at magnitude 7.7.

Delphinus (the dolphin) is one of Ptolemy’s original constellations and though small it has a very distinct shape. Gamma Delphini is a long period binary whose components are yellow (mag 5.1) and orange (mag 4.2).

Lastly Equuleus (the little horse) is the second smallest constellation in the entire sky covering just 71 square degrees. Only Crux is more diminutive at 68 square degrees. It has nothing of particular note save for several double stars.

Below this collection of small star groups lie Capricornus and Aquarius, and still further south we see the bright star Fomalhaut in Piscis Austrinis just 5° above the southern horizon.

Looking towards the west Arcturus is now only 10° high and will set at midnight BST. Above it are Corona Borealis and Hercules who are all outshone by the brilliant Vega (in Lyra) that is one third of the Summer Triangle. Hercules is of course home to the brightest globular cluster in the northern hemisphere, M13, which is just visible to the naked eye, as well as M92 which is a little fainter being only magnitude 6.5. Alpha Herculis, which indicates the strong man’s head, is a binary whose primary component is not only a red giant but also an irregular variable.

If we turn our attention to the north we find the Plough has almost completed its journey towards the horizon. Cepheus conversely is near the meridian and close to its maximum altitude. Within it lies the magnitude 6.1 open cluster NGC 7160, with a diameter of 7 arcminutes. Between Cepheus and the outstretched lower limbs of Pegasus lies the small and rather shapeless group of stars that form Lacerta (the lizard) that was created by Hevelius in 1687. As might be expected of a Milky Way constellation it is devoid of globular clusters, though there are a few open clusters and planetary nebulae.

To the east the sky has a distinctly autumnal feel to it with the prominence of Pegasus, Andromeda and Pisces although the thing that reminds me that the balmy summer nights are over is the first glimpse of the Pleiades in the late evening. Below the extremities of Andromeda are the small but obvious constellations of Triangulum (one group at least that resembles its name) and Aries. The most obvious object of note in the former is M33, or NGC 598, known more commonly as the ‘Pinwheel’ galaxy, a face-on spiral of magnitude 5.7. To the naked eye it is a difficult object but binoculars show it well, as it is considerably larger than the full Moon.

Only 15° away lies the most distant object visible with the naked eye from the latitudes of the UK and the largest member of the Local Group of galaxies, M31, the Andromeda galaxy. A giant spiral, its overall magnitude is 3.5 so it is comparatively easy from a dark site, though I find averted vision always helps. M32 and M110 are the most prominent of its attendant galaxies. Of course it was Edwin Hubble in 1925 who used images of Cepheid variables, taken with the 100-inch Hooker telescope at Mount Wilson, to show that M31 was in fact an ‘island universe’.

Mercury passes through superior conjunction on August 8, thereafter moving east of the Sun to become an evening object. However, it will always be poorly placed due to the angle of the ecliptic even at the time of greatest elongation, which occurs on September 21 with the planet setting only thirty minutes after the Sun. The poor apparition is further compounded by the fact that Mercury lies approximately 3° below the ecliptic. The smallest planet’s next showing will be far better for those observing from the latitudes of the UK, though it will favour early risers.
Venus continues to be visible as an evening object low in the east-north-east as the period begins, shining at magnitude -3.8. At the end of nautical twilight on August 1, the planet is 10° in altitude not far from Castor and Pollux. On September 1 with the Sun similarly placed, Venus is only 6° high and by the end of that month the distance between the Sun and Venus is under 7°.

On August 18 Venus joins Jupiter among the stars of Cancer and the two will pass just 12 arcminutes apart presenting an interesting photo opportunity. Superior conjunction occurs during the third week of October.

Mars is visible at an altitude of 14° in the south-west as soon as darkness falls at he beginning of August. It begins the period in Virgo but moving directly it crosses the border into Libra on August 10. Such is its speed that it has reached Scorpio by September 13, and then Ophiuchus just 12 days later. On August 25 it is 3½° south of Saturn, whilst on September 28 it is 3° north of Antares. At the end of the period Mars still sets more than two hours after the Sun although by then its apparent diameter has shrunk to 6.1 arcseconds and its magnitude has dropped to +0.8.

Jupiter suffered solar conjunction on July 24 and has now moved west of the Sun to become a morning object, travelling directly through the constellation of Cancer. By the beginning of September the planet rises nearly three hours before the Sun, and by the end this has become almost five hours. During the period its brightness increases marginally from -1.8 to -1.9 as its apparent equatorial diameter also grows from 31.4 to 33.6 arcseconds. As October draws to a close Jupiter will once more be an evening object.

Saturn is only 20° high in the south-south-west as the Sun sets at the start of the period. At that time it will itself set three hours later at midnight BST, although the period of visibility will shorten until the end of September when Saturn will set only one and a half hours after the Sun. It is currently moving direct in Libra where it will remain until it moves into adjoining Scorpio in mid-January 2015. During the period in question the planet’s brightness drops fractionally from +0.5 to +0.6 whilst unsurprisingly its diameter shrinks from 17.1 to 15.6 arcseconds. The tilt of Saturn’s axis increases to 22.3°, and as it does so it provides an even better presentation of the ring system to the Earth.

Uranus is in Pisces (where it has been for some time) as the period begins, rising at 23:00 BST and transiting at 05:00. The planet will come to opposition early in October with an apparent diameter of 3.6 arcseconds at magnitude 5.9.

Neptune is an evening object, rising at just after 21:30 BST and culminating at 03:00 at an altitude of 30°. It reaches opposition in Aquarius on August 29 at magnitude 7.8 with an apparent diameter of 2.3 arcseconds.

(1) Ceres and (4) Vesta are now slowly drifting apart after their close conjunction in early July. They are still moving in generally the same direction and move from Virgo into Libra towards the end of August. Ceres currently shines at magnitude 9.0 whilst Vesta is the brighter of the two at 7.8.

The Aquarids come to maximum on August 6 although they are active throughout July and August from a double radiant that produces mostly faint meteors.

The Perseids are also active over a long period which begins on July 23 and ends on August 20. Maximum occurs on the night of August 12/13 around 01:00 BST when the radiant is a little over 40° in altitude. The Moon on that night is waning gibbous in Pisces some 70° away from the radiant, although sadly it doesn’t set before dawn. The earlier stages of the shower are unaffected but once into August the Moon will have a negative effect on the remainder of the shower.

Next year the news is better. Although the Moon will interfere in the earlier stages it will be a spent force by the time of maximum, being just over a day from new.