The sky in June and July

In the north the bright star Capella is just skirting the horizon and approaching the meridian whilst above the north celestial pole Ursa Minor stretches towards the zenith. The head of Draco lies close to the overhead point allowing the twists and turns of the dragon to be more easily followed. At one point Draco’s tail passes between the two bears, with one of its stars being of special note. This is Thuban, which 5,000 years ago had the honour of marking the north celestial pole, and will again 26,000 years after it initially did so. 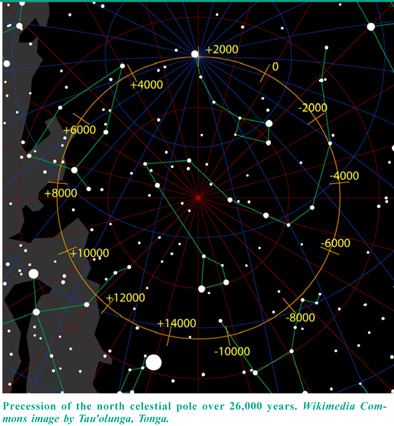 Due to precession, the Earth’s north and south poles describe an imaginary circle in the sky that, for northern observers, will pass through Cepheus, Cygnus and Lyra until in 12,000 years time the accolade of ‘Pole Star’ will belong to Vega. However, Vega will always be more than 5° from the celestial pole proper.

With Ursa Major lying to the west of the pole it follows that Cepheus and Cassiopeia will be found to the east of it. Perseus is rising but not yet clear of the northern horizon, although the double cluster in the ‘Sword Handle’ is already at an altitude of more than 20°.

Looking east we see that old favourite, the Summer Triangle, is already well positioned with brilliant Vega nearly 70° above the horizon and the body of the celestial Swan lying parallel to the horizon. Cygnus has its fair share of open clusters with M39 (mag 4.6) and NGC 6871 (mag 5.5) being the brightest. It is also home to the well known and much photographed Pelican and North America nebulae.

If colourful doubles are your thing then you will already have admired that lovely blue/yellow combination that is beta Cygni, better known as Albireo. The brightest star in the constellation is the celestial beacon, Deneb, that lies some 3,200 light years distant and shines with the power of 250,000 Suns.

Below Cygnus lies Vulpecula, a small constellation with no stars brighter than magnitude four and no identifiable shape. Several mag six open clusters plus the Dumbbell nebula (mag 7.6) and the Coathanger asterism all lie within its borders.

At this time of year the southern part of our sky is devoid of bright stars with the area given over to the generally faint groupings of Serpens, Ophiuchus, Hercules and Libra. From the latitude of the UK Sagittarius and Scorpio are never well placed for observation. Just above the southern horizon Scorpio straddles the meridian with the orange-red supergiant, Antares, at an altitude of 12°. This star’s size is such that if it were to replace our Sun, it would reach out to between the orbits of Mars and Jupiter. A slow variable, it has a mass of approximately 16 to 17 solar masses. Due to its location close to the ecliptic it is subject to occultations by the Moon, although the next such event won’t occur until the year 2400. To the east of Scorpio lies Sagittarius, with its ‘Teapot’ asterism, that will be at its best at the end of July.

In the west, Leo is about to set, with Virgo soon to follow. Arcturus is still more than 45° above the horizon meaning that Corona Borealis is well placed for those who follow the fluctuations of T CrB, a recurrent nova, and R CrB, a rare type of irregular variable currently undergoing a deep minimum – see Gary Poyner’s article in the June Journal. A line drawn from Arcturus, through Alphekka, the brightest star in Corona Borealis, and onwards will find the ‘Keystone’ in the faint constellation of Hercules.

Mercury at magnitude +1.4 lies only 6° above the north-western horizon on June 1 as civil twilight ends. It has just completed its best evening apparition for 2014 and is moving back into the clutches of the Sun ready for its inferior conjunction on June 19. It then becomes a morning object though from the UK it will be poorly seen. On July 12, when it is at greatest western elongation, it is less than 3° above the horizon as dawn civil twilight begins.

Venus is still a brilliant morning object if rather low as seen from the UK. As the period begins it is less than 5° in altitude when the Sun is 6° below the north-eastern horizon. However, by the last day of July, with the Sun similarly positioned, Venus will be seen shining at magnitude -3.8 at an altitude of 10°. So despite its elongation having shrunk from -37 to -22°, it is actually better positioned thanks to the change in the angle that the ecliptic makes with the horizon. Venus will eventually pass through superior conjunction on October 25.

Mars is still well placed in the evening sky, being on the meridian at sunset as the period begins and setting at 01:30 UT. Sadly, with opposition having occurred in April, it is well past its best and fades from magnitude -0.5 to +0.4 over the course of June and July. It is still within the borders of Virgo where it remains until the first half of August before its direct motion carries it into neighbouring Libra. As July draws to a close Mars sets by 22:00 UT.

Jupiter is more than 15° above the western horizon as civil twilight ends on June 1. It is still in Gemini shining at magnitude -1.9, although it will set by 23:00 UT. The planet is moving direct and will leave the confines of Gemini on July 8 and pass into adjoining Cancer, although the Sun is moving steadily eastwards itself so that eventually Jupiter is in conjunction on July 24.

Saturn has just passed opposition and therefore rises before sunset and crosses the meridian at 22:30 UT as the period begins. The planet moves retrograde in Libra until July 20, when it resumes direct motion once more. The north pole of Saturn is tilted towards Earth at a little over 21° for the entire period, giving us superb views of the ring system. As July comes to a close the ringed planet will be setting at 23:00 UT.

Uranus rises at 02:00 UT at the start of June but by the end of July it has become an evening object rising at 22:00 UT. It spends the period in Pisces, close to its border with Cetus.

Neptune is also a morning object, rising a little before 01:00 UT as the period begins although by the end it is rising soon after sunset. It currently resides in Aquarius, a constellation that will be its home until the year 2023.

(1) Ceres and (4) Vesta are both evening objects in Virgo and lie less than 3° apart at the start of June. The two close in on each other until, on July 13, they appear just over two arcminutes apart. At the time of this appulse Ceres will be magnitude 8.5 and Vesta will be 7.2. See Richard Miles’ article on p.120 for details of an interesting observing project for this rare conjunction.

On June 26 at 11:53 UT an almost new Moon will pass in front of Mercury. Unfortunately, the planet is only 10.5° from the Sun, so observation will be difficult. Eye safety should be a primary consideration in such cases to avoid accidentally stumbling across the Sun if sweeping with optical aid.

June and July have a smattering of minor showers with the bulk of the action coming from the Perseids which begin on July 23. Sadly, this year, the Moon will very much spoil the party although the early stages will be free from interference. ZHRs of 80 would have been expected at maximum if conditions were favourable but despite the poor conditions watches are always valuable.

In the table I’ve listed events for stars down to magnitude 7.0 although there are many others that are either of fainter stars or those whose observation may be marginal due to elevation or other factors. DD = disappearance at the dark limb, whilst RD = reappearance at the dark limb. The column headed ‘mm’ indicates the minimum aperture required for the event. Times are for Greenwich and in UT – add 1 hour for British Summer Time.