The sky in October and November 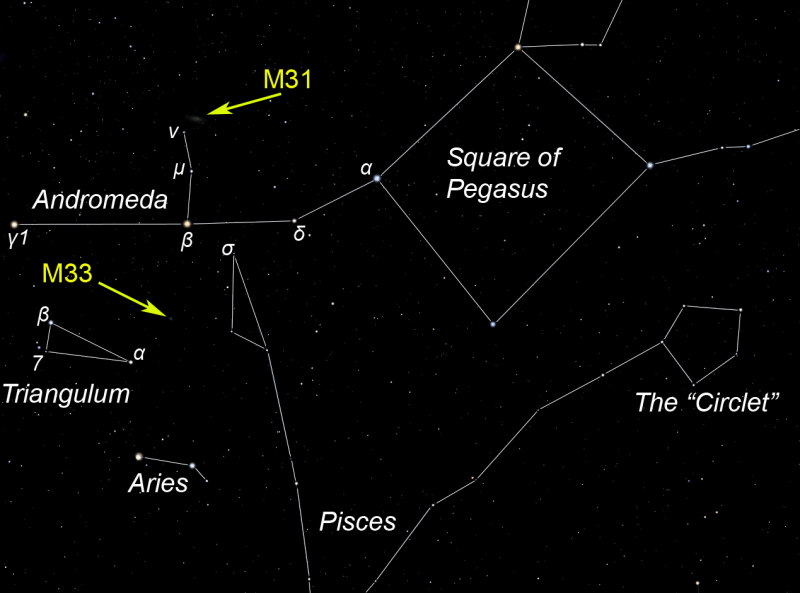 In the north Ursa Major is once again climbing away from the horizon which means that we have lost both the bright star Arcturus and the constellation of Corona Borealis from view, though by way of compensation the winter groups are now appearing. The Great Bear contains a myriad of galaxies, the most popular photographically being M81 and M82 that lie a little over half a degree apart.

M81 is also known as NGC 3031 or Bode’s Nebula, named after its discoverer, Johann Elert Bode, who first observed it in 1774. It is a spiral galaxy lying at a distance of 12 million light years, that is an easy binocular object having a visual magnitude of 6.9.

M82 is fainter, at mag 8.4, and is often referred to as a ‘starburst galaxy’ where an encounter with M81 triggered a period of extremely vigorous star formation. It was originally thought to be irregular but the discovery of spiral arms in 2005 showed that this was not the case.

The familiar ‘W’ of Cassiopeia lies on the meridian and close to the zenith, with Shedir (Alpha Cassiopeiae) only 5.5° from the overhead point. To the east of Cassiopeia lies Camelopardalis, and to the west Cepheus which contains the emission nebula IC 1396. At mag 3.6 it should be visible to the naked eye under dark and clear conditions. 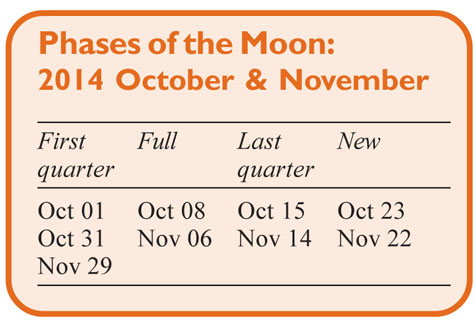 As we turn towards the east Capella is already 45° high and some of Orion’s retinue, in the form of Taurus and Gemini, have cleared the horizon. Auriga, lying as it does on the galactic plane, boasts a number of open clusters, the brightest of which is M37 at mag 5.6. Its Messier neighbours M36 and M38 are magnitudes 6.0 and 6.4 respectively. Gemini contains M35, a bright open cluster of mag 5.1 that can be found at the feet of the Heavenly Twins. It should be visible to the naked eye under good conditions, but a small telescope is all that is needed to start resolving its constituent stars. Of course Taurus is home not only to the photogenic Pleiades cluster but also the first object on Messier’s list, M1, the ‘Crab’ Nebula, which is the remnant of a supernova outburst in 1054. Some of the nebulous material can be seen with large binoculars when conditions are good.

High up in the south we find the lines of stars that make up Andromeda, with the well-known M31 on the meridian and lying just under 10° from the zenith. It is an easy naked eye object when seeing is good although I have always found that averted vision helps considerably. Locating it is easy because it is only necessary to count two stars from the top left corner of the Square of Pegasus (which is actually Alpha Andromedae) and then two stars north to nu, and M31 is a little west and north of that.

Below Andromeda lie the two small but obvious groups of Triangulum and Aries, the former of which contains M33, the ‘Pinwheel’ galaxy. Its position is shown on the map, but it lies a third of the way along a line drawn between Alpha Triangulii and Sigma Piscium. Below these two constellations we find Cetus, which is home to one of the best known variable stars – Mira ‘the wonderful’. Its variations take it from mag 3.5 at maximum down to 9.5 at minimum.

Just skimming the horizon is the small constellation of Sculptor wherein lies the South Galactic pole, and just west of it will be seen Fomalhaut, the brightest star in Pisces Austrinus, the southern fish.

In the west the Milky Way rises almost vertically towards the zenith passing through Aquila and Cygnus, where dark rifts can be seen, on its way to Cassiopeia near the zenith. The third member of the Summer Triangle, Vega in Lyra, is still 30° high and not far from the head of Draco. A pair of binoculars will give some beautiful views of the star fields in and around the Milky Way, and don’t forget to look for the ‘Coathanger’ asterism that lies on a line between Vega and Altair, slightly closer to the latter.

Mercury is in inferior conjunction on October 16 after which it moves west of the Sun to become a morning object. This will be the best morning showing of 2014 as seen from the UK with greatest elongation (W) reached on November 1. On that date, at 06:15 UT, the planet will be 11° high in the east-south-east with the Sun 6° below the horizon as nautical twilight ends. It will shine at magnitude -0.5 although it will brighten to -0.8 after it has passed elongation. The table below gives the smallest planet’s altitude and azimuth with the Sun at -6° as seen from Greenwich. After this Mercury heads for a superior conjunction on December 8.

Venus is less than 7° from the Sun as the period begins, so is effectively unobservable. It passes through superior conjunction on Oct 25 to become an evening object although by the end of November the planet lies only 9° from the Sun, setting just 25 minutes after sunset as seen from Greenwich. It will probably be the end of the year before UK observers catch their first glimpse of it again.

Mars is an evening object setting just over two hours behind the Sun at the beginning of October, increasing to more than three hours by the end of November. The planet’s altitude increases slightly during this time from 12° to 16° at sunset. It spends the first three weeks of October in Ophiuchus (which I presume causes a headache for astrologers) before crossing the border into neighbouring Sagittarius where it moves briskly past the ‘Teapot’ asterism and almost reaches Capricornus before November draws to a close. Sadly for UK observers Mars will always be comparatively low in the sky because it is so far south of the celestial equator, with a declination of almost -25° on Nov 1. Its brightness falls from +0.8 to +1.0 and its apparent diameter from 6.1 to 5.1 arcseconds.

Jupiter is a morning object as the period begins but an evening one by the time it ends. At the start of October the giant planet rises at 02:00 UT in Cancer but moves into adjacent Leo on Oct 21, where it remains until early 2015 February when it returns to within the boundaries of the Crab. At the end of November it rises before 22:00 UT, transiting at 05:00 UT at an altitude of more than 53°. Both its brightness and apparent diameter increase as it moves towards opposition on 2015 Feb 6.

Saturn is currently an evening object drawing closer to the Sun as it approaches solar conjunction on Nov 18. At the start of October it is just 8° above the horizon at the end of civil twilight, signalling the end of the current apparition. However, we are not without the ringed planet for long as it soon re-emerges into the morning skies in December and rises more than three hours before the Sun by the end of that month.
On October 25 at 16:06 UT (from Greenwich) Saturn is occulted by a two-day old Moon. It emerges at the bright limb fractionally over an hour later. Unfortunately the Sun is still above the horizon for the disappearance, whilst it is only 4° below for the re-appearance.

Uranus is visible in the southern reaches of Pisces although it is a little above the celestial equator. By the first of October it culminates at 22:00 UT at an altitude of 43° with a magnitude of +5.9.

Neptune is also an evening object crossing the meridian at 19:45 UT on Nov 1 and setting by 01:00. It is currently ensconced in Aquarius, at mag 7.7, where it will remain for some years to come.

(1) Ceres and (4) Vesta both lie within the borders of Libra, making them low in the sky due to their southerly declination. Ceres, at magnitude +9.0, passes less than half a degree north of Saturn on Oct 4.

The Orionids are active from Oct 16 to 30 with a long flat peak occurring from Oct 21 to 24. There are a large number of fast meteors, many of which leave persistent trains. With a new Moon on Oct 23 there will be no interference from moonlight. ZHR at maximum is in the order of 25.

The Taurids have much lower velocities and fewer events compared with the Orionids. The normal limits are from Oct 20 to Nov 30 although there are two separate peaks that occur on Nov 5 and 12. Sadly both will be affected by moonlight this year. ZHR at maximum is approximately 10.

The Leonids are active from Nov 15 to 20 with a narrow maximum expected at 01:00 UT on Nov 18. These are also very fast bodies with speeds in the order of 70km/s. A slender waning crescent Moon will rise at 02:30 UT so should provide only limited interference. The ZHR at maximum is expected to be in the range of 15 to 20 with no outbursts predicted.

In the table I have listed events for stars down to magnitude 7.0 although there are many others that are either of fainter stars or those whose observation may be marginal due to elevation or other factors. DD= disappearance at the dark limb, whilst RD= reappearance at the dark limb. The column headed ‘mm’ indicates the minimum aperture required for the event. Times are for Greenwich and in UT.

A number of graze occultations occur during the period in question. Those with the brightest stars and largest cusp angles are more likely to be successful, although observers are encouraged to attempt any of these events and submit results, negative as well as positive, to Tim Haymes at occultations@baalunarsection.org.uk