At this time of the year in the northern hemisphere the skies to the south are dominated by Orion the Hunter and the constellations that surround him. Generally we think of these as being two dogs (Canis Major and Canis Minor) a bull (Taurus) and the Twins (Gemini). However, he is also flanked by a hare (Lepus) a unicorn (Monoceros) and to add a little variety, the river (Eridanus). You could be forgiven for thinking that with Beta Eridani being in such close proximity to Rigel, it must be a member of Orion, but this is not the case as the boundary passes between the two. Eridanus is the sixth largest constellation by area and winds its way south from the foot of Orion to within 15° of the Small Magellanic Cloud.

Monoceros though has far more in the way of bright objects to recommend it. It is home to Messier 50, NGC 2232 and NGC 2244, all of which are open clusters. The Christmas Tree is another such cluster with an aggregate magnitude of 3.8, which suggests it should be a moderately easy naked eye object.

At this time the bright star Capella lies just a few degrees from the zenith whilst below it only Taurus from Orion’s more popular retinue has reached the meridian.

Moving westwards the area is filled with the large rather shapeless forms of Eridanus and Cetus before we reach Pisces, where the ‘Circlet’ is close to setting, and then Pegasus that in its current orientation presents itself more as a diamond than a square. Andromeda reaches almost vertically towards Perseus passing the naked eye cluster M34 on the way to the zenith. 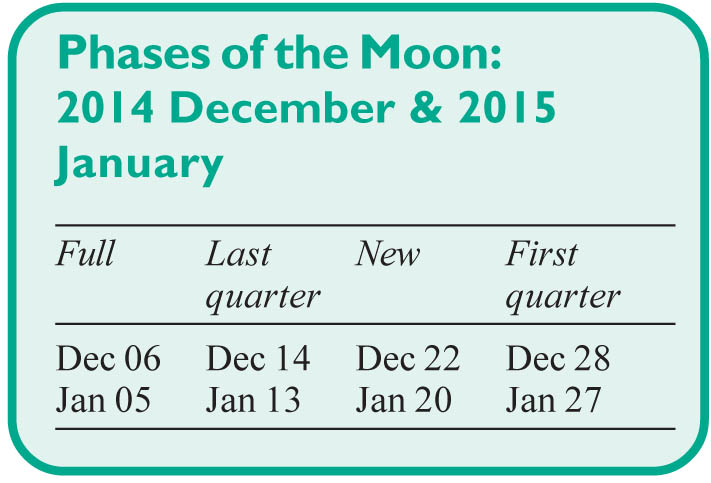 In the north Vega is close to the horizon and will set briefly from the latitude of London, though its fainter companion from the Summer Triangle, Deneb, is circumpolar from there. Ursa Major is once more climbing away from the horizon whilst on the opposite side of the north celestial pole Cepheus, that lies partly within the Milky Way, is descending. Cepheus contains IC 1396, an emission nebula that is said to be visible to the naked eye when conditions are exceptional. It is also home to Mu Cephei, more popularly known as the Garnet Star due to its having a deep orange hue.

Looking east, Cancer is already more than 30° high revealing its two open clusters, M44 and M67. The former is one of the best known examples of this type of cluster, being known variously as The Beehive, Praesepe, NGC 2632 and Cr 189. It appears as a misty, nebulous object at mag 3.7 and is roughly three times the width of a full Moon. Estimates of the number of stars in this loose group vary from 200 to as many as 1,000, although when Messier first looked with his new telescope he is reported to have seen just 40. Many of M44’s constituent stars are white dwarfs and red giants, so they are stars in the twilight of their celestial lives.

M67 is fainter (mag 6.1) than its more popular neighbour and, although smaller at half a degree across, is an easy binocular object amongst the southern legs of the Crab. Just below we find the head of Hydra, the water snake, whose body extends generally southwards terminating even further below the horizon than the previously mentioned Eridanus. 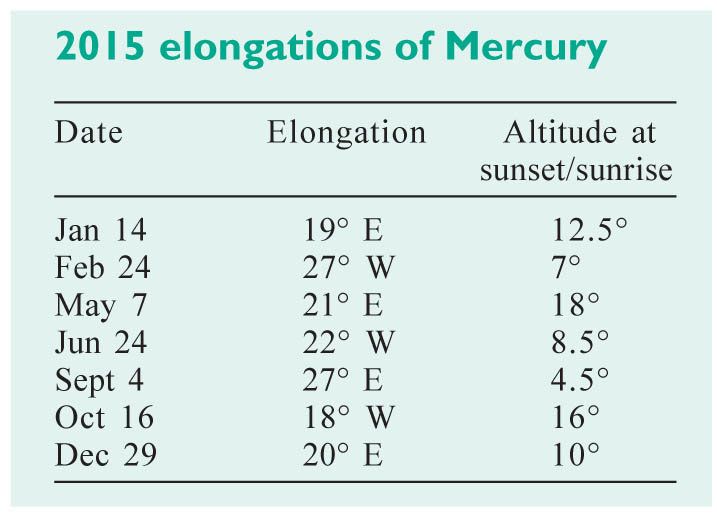 Mercury reaches superior conjunction on Dec 8 after its best morning apparition of 2014. It then moves east of the Sun to become an evening object, reaching greatest elongation (E) on Jan 14 when it will be 19° from the Sun at magnitude -0.7. On that date Mercury will have an altitude of 12.5° at sunset, providing one of the most favourable evening apparitions of 2015. All the elongations for the coming year are shown in the Table, together with the planet’s altitude at sunset. Mercury and Venus are less than one degree apart on January 10.

Venus was in conjunction with the Sun towards the end of October but should re-appear in our evening skies in late December/early January. Of course at this time of year the Sun is well south of the celestial equator and Venus, in close attendance to it, is doomed to suffer similar low altitude and visibility issues. However, the planet will enjoy a moderately good apparition through the first half of 2015 with eastern elongation (45°) occurring on June 6, and western elongation (46°) on Oct 26. Maximum brilliance, mag -4.5, occurs around July 7 when Venus will be 15° above the western horizon at sunset.

Mars is still visible as an evening object low in the south west although things improve as its declination increases. The brightness and angular size of Mars are both dwindling as the Earth pulls further away from the red planet. By the end of January it is just 4.5 arcseconds in diameter at mag +1.2. It begins the period in Sagittarius but within a few days has moved into Capricornus, where it stays until Jan 9 when its eastward motion takes it into neighbouring Aquarius.

Jupiter is an evening object rising before 22:00 UT as December begins and by the end of January this has become 17:30 UT. It rises very soon after sunset, as you would expect with opposition occurring a week later on Feb 6. During January and February the giant planet’s brightness increases from -2.2 to -2.5 and its apparent size from 43″ to 45″. Jupiter is initially moving direct but on Dec 8 it reaches its first stationary point and thereafter moves retrograde, bringing it to the Leo/Cancer border by the end of January. Direct motion is not resumed until 2015 April 8.

Saturn is a morning object having been through solar conjunction in November. However, it moves swiftly away from the Sun until, by the end of December, it is rising more than three hours ahead of it. The ringed planet’s magnitude stays constant at +0.5 whilst its apparent diameter increases slightly, although it will be late May before it reaches opposition. Titan, Saturn’s largest natural satellite, is at western elongation on Dec 7 and 23 and Jan 8 and 24. Eastern elongations occur on Dec 15 and 31 and Jan 16.

Uranus is an evening object and still resident in Pisces, setting at 02:00 UT at the beginning of December but soon after 22:00 UT by the end of January.

Neptune is an evening object in Aquarius culminating just before 18:00 UT as the period begins. By the end of January it sets a little over two hours after the Sun. Finder charts for both of the ‘Ice Giants’ can be found in the BAA Handbook.

(1) Ceres and (4) Vesta both suffer solar conjunctions during the period. Ceres is first to rendezvous with the Sun on Dec 10 whilst Vesta has to wait until Jan 10, although neither are well placed for observation until later in the year.

The Geminids are one of the most active of the annual showers, with promising estimates of activity. They are active from Dec 8 to 17 with maximum occurring this year at 07:00 UT on Dec 14 when the ZHR could reach 100. The radiant lies just above the ‘Twins’ and has reached almost 50° in altitude by 23:00 UT. Unfortunately, as last year, the Moon will interfere to some extent, as on the night of maximum it is at last quarter and located in southern Leo, rising at 23:15 UT.

The Ursids are an under-observed shower and would benefit from increased watches despite the proximity of Christmas. They are active from Dec 17 to 25 and reach maximum during Dec 22 to 23. This year the Moon will fortunately play no part in this event.