Using a blue filter to observe the white clouds on Mars 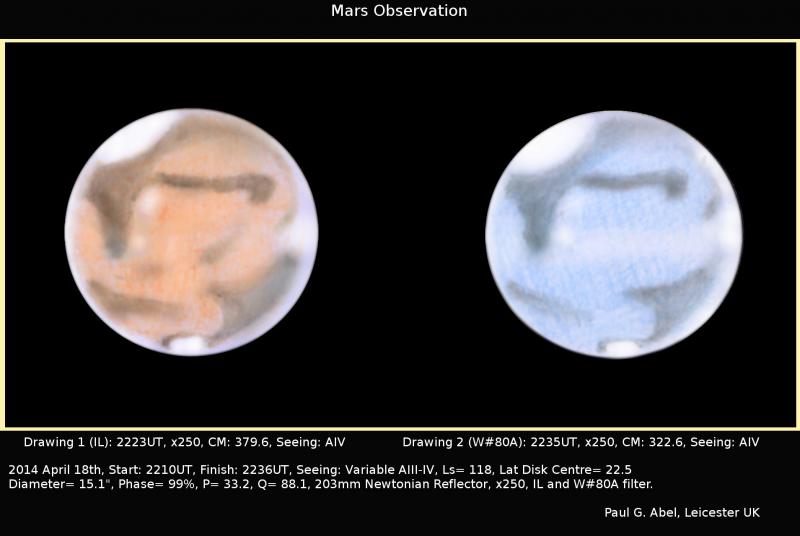 Mars continues to make a noticeable presence in our evening skies- its lovely ruddy hue makes it a prominent object shining amongst the dimmer stars of Virgo. Although we are now past opposition, the planet still has an apparent size greater than 10 arc seconds, so anyone with a 5 inch telescope or larger should still be able to make out the well defined surface features.

At the time of writing, it is spring time in the Martian northern hemisphere- this is the hemisphere currently on show. The increasing temperature has caused the brilliant north polar cap to sublimate, returning volatiles like water and carbon dioxide into the tenuous Martian atmosphere. As a result, we see an increase in white cloud activity. These clouds can collect around the vast volcanoes of the Tharsis region. They are also often found above the deep basins and canyons.

The clouds can become very prominent- indeed they can transform Hellas basin into a brilliant white region making it look like a false southern polar cap! Clouds frequently collect in Chryse and it is not uncommon for an equatorial cloud band to be seen. Visually, these bright clouds are at their most prominent when they are on the limb of the planet. Moreover, they can be enhanced visually by using a blue W#80A filter.

A visual filter works by allowing some wavelengths of light to pass, while stopping others. The ‘W#’ refers to the ‘Wratten number’- this defines the colour of the filter. The code is arbitrary, for example a W#25A is a red filter, a W#11 is yellow and so on. The filters are called ‘Wratten Filters’ after Frederick Wratten who first invented these optical filters for use in photography.

In most cases you will find the filter number printed on the side of the filter. It is well known that a blue filter helps to bring out white cloud activity by increasing their contrast, making them easier to see. I find a W#80A also helps to enhance the North Polar Cap which is quite small at the moment.

Filters can really help enhance the views of the planets, and I recommend you add some to your observer’s tool kit!