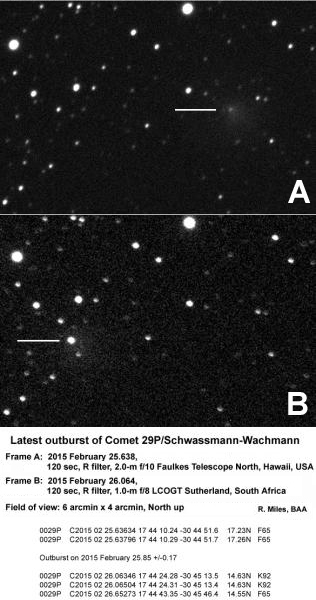 The unique outbursting comet known as 29P/Schwassmann-Wachmann has outburst for a second time during the month of February!

Within the space of just 10 hours, the quiescent 17th magnitude comet had been transformed into what might easily be mistaken as a new 14th magnitude star in the constellation of Scorpius less than 2 degrees from the open cluster Messier 6. The comet is currently immersed deep in the Milky Way, within one degree of the galactic equator where it ordinarily would be difficult to distinguish amidst a myriad of background stars. However, comet 29P happens to be traversing a dust lane within the Milky Way caused by an intervening molecular cloud, which obscures most of the distant stars and so thankfully we have a good view of this latest outburst.

At 15:18 UT on February 25 the magnitude was R=18.4 in a 2.4 arcsec diameter circle centred on the nucleus of the comet. By 01:30 UT the next day the same region near the nucleus had brightened to R=14.6, an increase of almost 40 times, having assumed a star-like appearance. The accompanying images illustrate the dramatic change. Astrometry and photometry (11″ aperture) measurements of images taken before and after the outburst are also shown.