When deep sky observers talk of the Coma Cluster they usually mean the enormous cluster of galaxies which lie some 400 million light years distant. But there is another cluster in Coma, and it lies much closer to home, and that is the Coma star cluster.

Coma Berenices is a rather poor constellation for those people who like their constellations to actually look like something. Its outline consists of a right angle formed of 3 stars of 4th magnitude, and so for anyone living in light polluted suburbia the constellation may well be invisible to the naked eye. However, if you have a reasonably dark sky you will not only see these stars but also the cluster itself, which lies on the western edge and close to the much more dramatically shaped constellation of Leo. In fact there are suggestions that the Coma cluster once represented the end tuft of Leo’s tail.

In mythology the cluster represents the locks of hair of Queen Berenice, who cut off her hair to thank the gods for the safe return of her husband from battle. 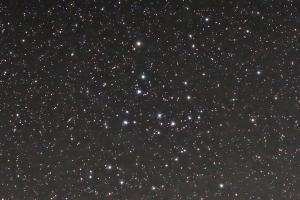 Although as a naked eye object it has been known since antiquity – Ptolemy catalogued it in his Almagest – the Coma star cluster goes under the official title of Melotte 111 as it was first listed by Philibert Melotte in his 1915 catalogue (it is also known as Collinder 256). Covering 5 degrees of sky this is a cluster best seen in binoculars. It is very open and quite sparse consisting mainly of 5th and 6th magnitude stars with a total visual magnitude of 1.8.

The star count varies between references, but is probably of the order 50. Even so, despite its lack of richness this is a beautiful binocular object and one of my favourites and, I think, looks much more dramatic through binoculars than photographs suggest it should. Different observers always see different shapes in open clusters and to my eyes this cluster always takes on the shape of a tuning fork.

BAA member Martin Butcher took the image shown here using a Canon 40D with 50mm lens. Also just seen in this image are some of the many galaxies that Coma Berenices is famous for – but don’t expect to see them in small binoculars. The north galactic pole (the direction of the axis of rotation of our galaxy) lies in this constellation so our view is straight out to deepest space and away from obscuring dust.

With lighter night-time skies approaching the opportunities of seeing the cluster this year are limited. But there is still time once the Moon becomes less obtrusive. On May 8 the cluster will lie due south at 21:30UT (20:30BST) at an elevation from southern England of 65 degrees. Coordinates for the centre of the cluster are RA 12h 26m and Dec +26 deg.