This note is a shortened version of an article I wrote for Observers’ Forum in the 2006 December JBAA.

Having finished decorating your terrestrial Christmas tree why not step outside and view a celestial one! Well placed in the often overlooked constellation of Monoceros, NGC 2264, called the Christmas Tree Cluster by the American astronomer Leland Copeland, lies due south around 1am in mid-December. The cluster lies amid a vast area of nebulosity, well captured in the image by Gordon Rogers shown here.

The co-ordinates of NGC 2264 are RA 06h 41min and Dec. +09deg 54arcmin but binocular observers can sweep it up easily as it lies midway and slightly north of a line joining Betelgeuse and Procyon. In 10x50s the cluster, which is just over half a degree in size, will show around 20 stars arranged in an upside down triangular pattern. It takes an inverting telescope to create the Christmas tree image.

Don’t confuse the prominent little triangular asterism that lies to the west with NGC 2264. If you put this asterism on the right hand edge of a typical 5 degree binocular field, then NGC 2264 will appear on the left hand side. Larger binoculars will show more stars, but I find the view in smaller glasses more appealing. Studying the cluster carefully will show a string of faint stars curving away from the trunk – perhaps a length of loose tinsel!

Don’t expect binoculars to show any nebulosity. That will take a large telescope, very transparent skies and probably a nebula filter. In a 300mm telescope equipped with either UHC or O-III filter you might see faints wisps of nebulosity, but nothing compared to that shown in Gordon’s image below. 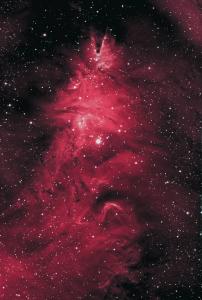