Measuring about 60 km across, Comet 29P/Schwassmann-Wachmann (29P/S-W1) is a very large comet and like no other we know of. Or so it appears, following the analysis of intensive observations of this mysterious object conducted largely by amateur astronomers, the results of which have been published online this month by way of two papers in the journal, Icarus. 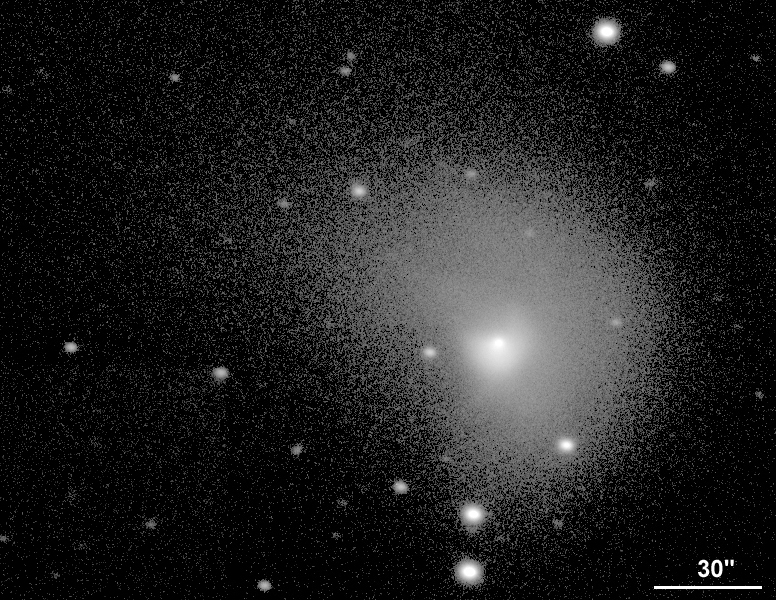 Comet 29P/S-W1 occupies a near-circular orbit some 6 AU from the Sun, i.e. it follows a path more akin to that
of a planet located beyond Jupiter. Yet, unlike a planet, it exhibits outbursts, every few weeks or months,
when its coma brightens by typically 10-fold, and occasionally by 100-fold or more. Until now astronomers have
been unable to explain its mysterious behaviour. Well it turns out that the observations can be interpreted in
a self-consistent way as follows:

The spin rate of the comet’s nucleus is extremely sluggish, taking more than 57 days to revolve once. With
daytime on the comet lasting several weeks, a strong crust appears to have developed across much of its surface
below which significant pressures can be maintained. At least 6 locations on the nucleus have been identified
where cryovolcanoes exist, the most active of which can erupt after just one revolution, or day-night cycle.
Outburst activity appears seasonal with large parts of the surface remaining inactive during 2010-2014, which
indicates that its rotational axis must be considerably tilted. Amazingly, strong outbursts can trigger other
areas nearby to also erupt within a few days.

The two papers have been published sequentially, highlights and abstracts of which are shown below: 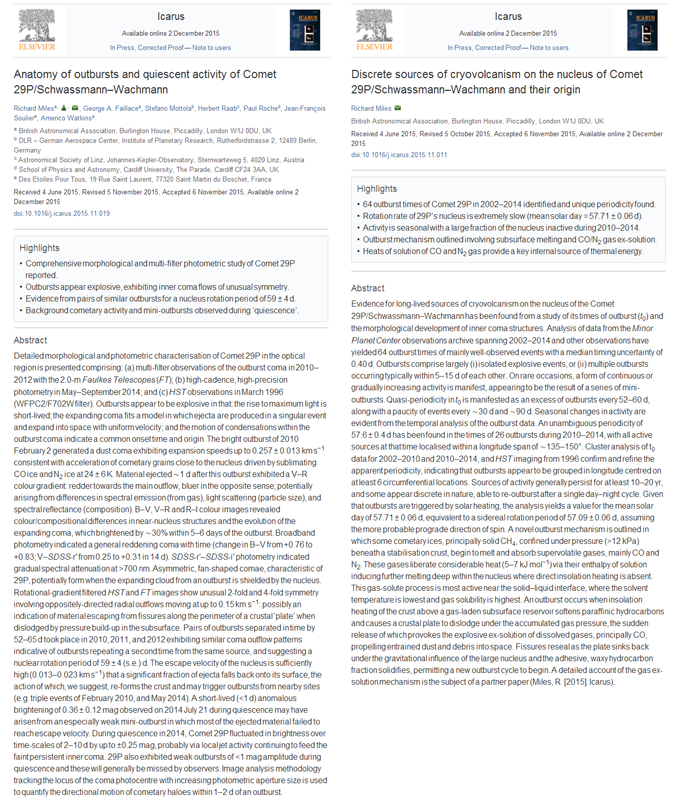 Click on the image a couple of times to go to a full-resolution, easily readable version.

Some of the cryovolcanoes appear long-lived, persisting for at least 10 or 20 years. The second paper
introduces new cometary science to explain the underlying mechanism which powers outbursts of 29P/S-W1. For
instance, where pressures of 1/8th of an atmosphere or greater can be sustained, methane ice can begin to melt
in the presence of carbon monoxide (CO) gas, since this particular gas has a strong affinity for dissolving in
liquid methane liberating a substantial amount of heat in the process. This new source of thermal energy can
arise deep below the surface where solar heating is unable to penetrate by normal heat conduction. Where large
amounts of CO have been absorbed at pressure and the daytime heat of the Sun causes the overlying crust to give
way, the subsurface magma is rendered supersaturated, in a similar process to the escape of champagne from a
bottle when the cork is suddenly released and dissolved CO2 spontaneously effervesces. This ‘exsolution’
process results in the explosive release of dissolved gases, principally CO, from the cryomagma propelling
entrained dust and debris into space: hence an outburst. Its larger outbursts can project more than 1 million
tons of material into space, which at a distance of nearly 1 billion kilometres enhances the coma, which then
can reach 11th magnitude as seen from the Earth.

Although 29P/S-W1 is a special case, it is not unique as many other comets have exhibited strong outbursts
occasionally when far from perihelion. It is likely that all of these comets share at least two features:
(1) the nucleus of each rotates unusually slowly, i.e. requiring several days or more to turn once; and
(2) a strong crust permits certain cometary ices in the subsurface to melt.

A detailed account of the ‘gas ex-solution’ mechanism is the subject of a further paper, already submitted to
Icarus. This third paper addresses the underlying chemistry of cometary outbursts and highlights the various
chemical species that can contribute to observed activity. Hopefully this paper will be published early in
2016. By the way – you may have heard of the recent discovery of molecular oxygen (O2) in Comet 67P/C-G from
the analysis of Rosetta data. Well, surprise, surprise, O2 gas can also participate, facilitating outbursts
from comets far from the Sun.

How about ESA and/or NASA devising a space mission to send a probe to visit Comet 29P/S-W1 for a close-up view
of its eruptions? Since the comet almost certainly originated from the Edgeworth-Kuiper belt, it is in effect a
Trans-Neptunian Object (TNO) that has been displaced into the inner Solar System. So it would be a convenient
way of analysing the constituents of one particular TNO as they are expelled into space following each
outburst. What a prospect!