Amateurs resolve yet finer details on Jupiter and its moons 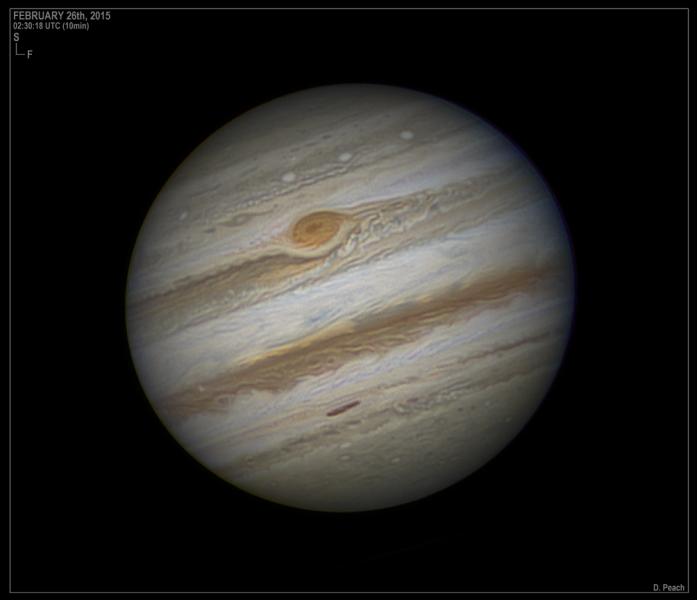 With the recent improvements in imaging techniques, amateurs are detecting details on Jupiter and its moons that could previously only be recorded by spacecraft.  Some eye-catching examples are shown in several reports recently posted by the BAA Jupiter Section at:

The internal circulation of the Great Red Spot – which is a giant anticyclone —  can now be tracked frequently, by following small dark streaks around its outer part.  According to our analysis, the rotation period decreased steadily from 4.7 days in 2005 to 4.0 days in 2012, and was 3.6 to 3.8 days in 8 separate measurements in 2014-15 (see reports nos.1 & 3).  And whereas these measurements were based on one streak at a time, images in recent months have resolved multiple features within the GRS, and can visualise the rotation within less than an hour as the GRS crosses the planet.  Examples are shown by Isao Miyazaki on 2014 Nov.1 and by Damian Peach on 2015 Feb.26 (reports nos.1 & 7).

The four great moons have been displaying fascinating phenomena as the system is exactly edge-on to Earth at present.  These include multiple transits, and transits with the moon in front of its shadow, and transits with surface features resolved on Io and Ganymede (report no.4). There are also mutual phenomena, when the moons eclipse and occult one another, and observers have attained unprecedented resolution of these events; we show a selection of image sequence, drawings, and light-curves (report no.6).

We have also completed a full report on Jupiter in 2005 and 2006, which were the first years of comprehensive hi-res imaging by amateurs, and the last years of generally normal activity before the global upheaval of 2007.  This is a detailed account, with many image compilations, documenting the planet’s atmospheric features and currents during normal times.  It is at: