Amateur images of Jupiter are now so good that they reveal the great complexity of the planet’s winds: : the jets, and disturbed regions within the belts, and motions of innumerable spots.  The BAA Jupiter Section has posted an animated series of maps of Jupiter covering 2015 Feb.27 –Mar.1 and March 4-7: five global maps, plus two maps of the equatorial region, taken at intervals ranging from 1 to 4 rotations (one rotation = 10 hours). ‘Blinking’ between them dramatically shows the planet’s wind patterns. They are on the BAA Jupiter Section web site at:
http://www.britastro.org/jupiter/2014_15report09.htm

The maps are mostly from images by Kevin Quin, Damian Peach, Tiziano Olivetti, and Christopher Go, and were made by Marco Vedovato and Kevin Quin.
More detailed text, and zonal wind profiles, are posted along with them.
These maps can be compared with those which NASA recently posted from Hubble Space Telescope images on 2015 Jan.19, one rotation apart,:

These excerpts from two consecutive maps show the degree of detail that can be followed. 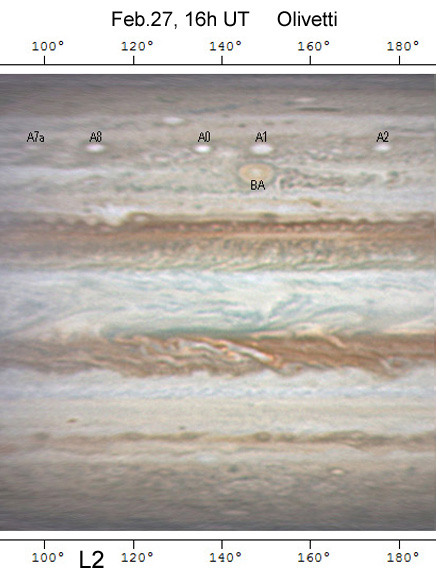 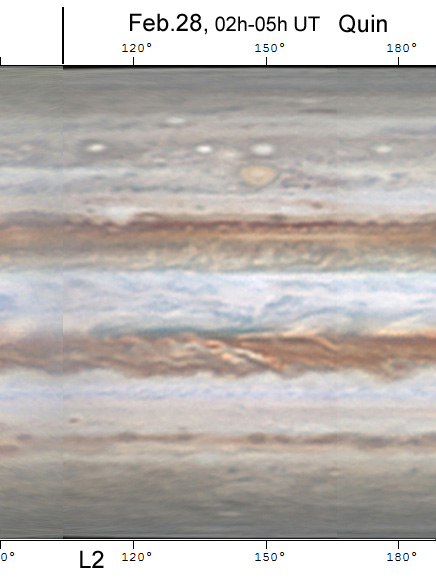