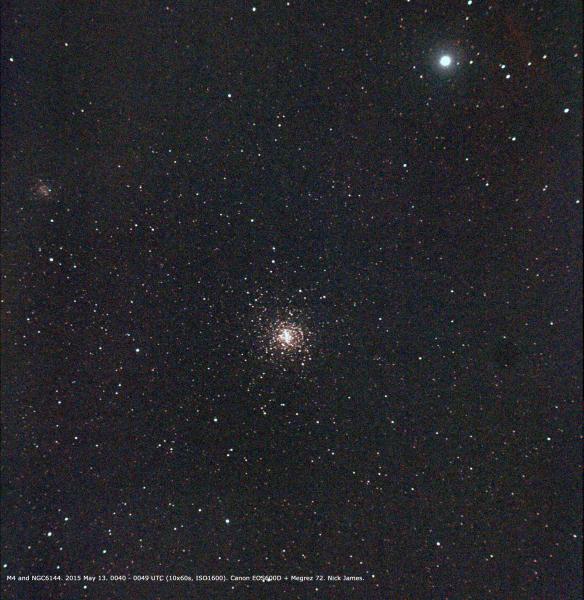 Most astronomers have a favourite constellation. For many it will be Orion, but for many others it will be Scorpius. There is no doubt that the sight of the Scorpion riding high in the southern sky with its numerous attendant clusters – both open and globular – is a wonderful sight. Unfortunately from the UK we only see half the constellation, and you need to travel further south to see it in all its glory (and to get dark skies at this time of year). However, its brightest star, Antares, does clear the horizon, and from central England culminates around 10 degrees up. Antares is a red supergiant about 300x the diameter of the Sun and lying 330 light years distant. In late May and early June Scorpius lies due south around midnight.

If you have a good southern horizon binocular and small telescope users should be able to pick up a hazy patch just over 1 degree west of Antares. This is the globular cluster Messier 4, discovered by de Cheseaux in 1746. Around 10 billion years old and 70 light years in diameter, it is one of the closest globulars to us (and probably the easiest to find) and at magnitude 5.4 can be a naked eye object if you can see it high up under a dark sky. It is a class IX cluster, so quite open, and through a small telescope always looks to me like a swarm of dancing fireflies. One unusual feature of M4 is that it has a central bar of stars. This is just seen in Nick James’ image reproduced here, and is very clear in many professional images.

Nick imaged the cluster from Chelmsford using a Megrez 72 and Canon EOS 600D combination. Also shown in his image is the globular cluster NGC 6144 which lies just under 1 degree to the north-east of M4. It is not a particularly easy visual target in a snall telescope as it lies even closer to Antares than M4 does, and at a distance of 29000 light years compared to M4’s 7000 is considerably fainter at magnitude 9. The bright star in the image is magnitude 2.9 sigma Scorpii.