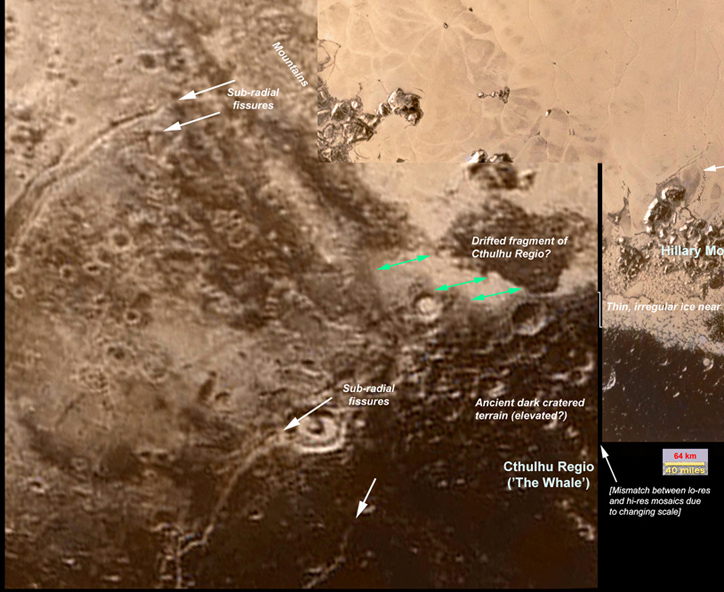 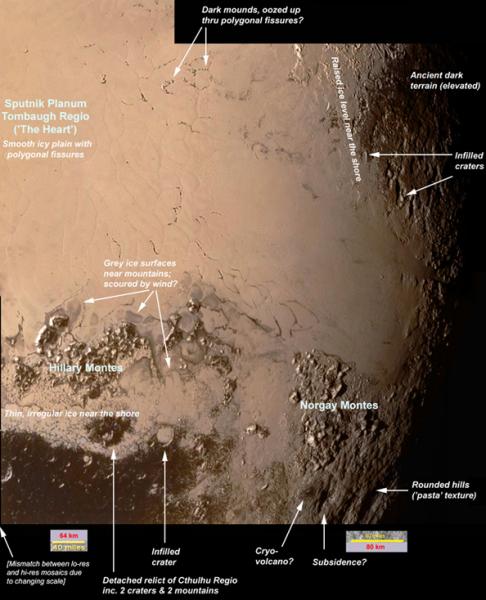 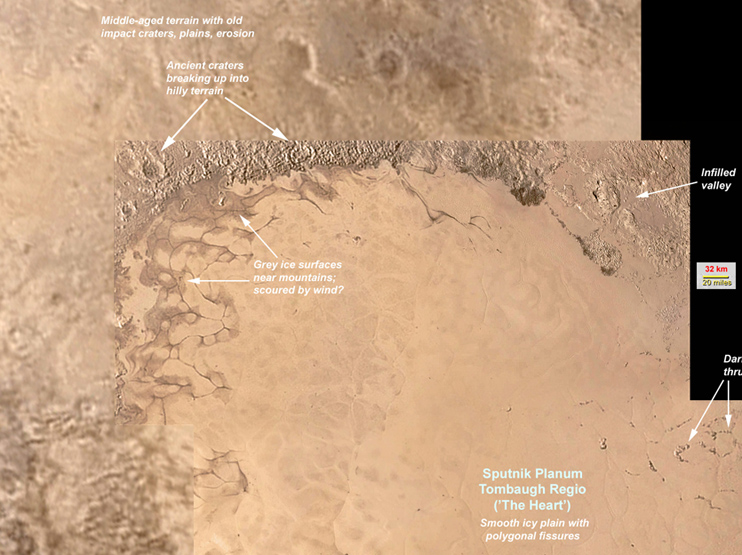 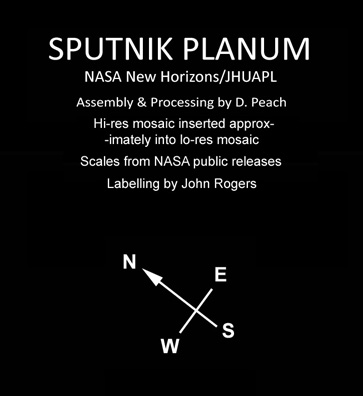 Now that NASA’s New Horizons probe has returned all the hi-res Pluto images that are likely to come for the next two months, and Damian Peach has made a fine mosaic of them (see previous post), I’d like to offer a few speculations about the nature of this newly revealed world, along with an annotated version of the mosaic. This is not intended as serious theorising: no doubt the New Horizons scientists have already thought of all these ideas, and will eventually tell us what is physically plausible and what is consistent with their other data.  But the following comments may be of interest, though they are merely personal opinions. To fit into the file size limitation on this news item, the mosaic has been reduced in scale and split into four sections.

The very dark regions, forming a discontinuous belt around the equator, are ancient, cratered, generally high-altitude terrain.  The temperate latitudes have a variety of terrains, including craters, fissures, plains, and erosion scarps, which we have not yet seen at high resolution. And the Heart is a vast flat plain of ices (methane, nitrogen and CO, as the team tell us), free of craters, with a variety of mountains and hills and valleys surrounding it.

The Heart seems to be a roughly circular hollow; so is it an old impact basin?  I see no distinct signs that it is. The surrounding hills and mountains do not form a regular rim. There are narrow sub-radial fissures extending from it through the cratered terrains, but they do not resemble the broad graben or scour-marks that radiate from impact basins elsewhere (e.g. on Ceres). Instead, there are sectors where the adjacent dark cratered terrain seems to subside into the basin.

To the SE, the dark cratered terrain slopes down gradually to a slightly elevated margin of the ice plain, which has presumably changed its level in recent geological times, filling in craters on the sloping margin.  To the NE, the rim has a texture of small chaotic hills, and one can see two old craters breaking up to become part of this terrain.  To the W, there are isolated fragments of the cratered terrain – and possibly (though not yet seen at high resolution) one of them has drifted, like the ice rafts of Europa!  If so, the Heart must have formed as a hole in a rather thin crust, with plastic or even liquid mantle beneath. Hillary Montes, further into the Heart, could be eroded remnants of such crustal fragments. To the S, the ancient terrain has disappeared completely, cut through by an extension of the ice plain flanked by the tall sharp peaks of Norgay Montes.  Their alpine shapes suggest erosion; are their slopes kept steep and fresh by freeze-thaw cycles during Pluto’s seasons?  Here there are also lower, rounded hills that look like a pile of pasta – were they extruded or have they subsided?  Among them is a darker hill that could even be the first true cryo-volcano.

How could the Heart have been formed, if not directly by impact?  As the NH team said when they saw their first close-up image, such recent geological activity was presumably driven by heat generated within the dwarf planet.  So, have warm convecting plumes disrupted the ancient surface, especially in the Heart, and more modestly at intervals of ~22 deg. longitude in the opposite hemisphere? Given that tidal and radioactive energy seem unlikely to be adequate for such large-scale tectonics, could the exotic ices deep inside Pluto have undergone some sort of phase change during its history, releasing heat and reducing the density, leading to foundering of the crust?  Was such a process initiated most of all where a large impact had weakened the crust, so an impact basin was enlarged by spreading collapse to create the Heart?

The ice plain itself, Sputnik Planum, is no less fascinating.  It is all marked with a pattern of shallow grooves, presumably fissures, defining polygons that span ~20-70 km.  In some areas the grooves are filled with dark material and in one area this comprises dark mounds rising above the surface.  Is some tarry organic substance oozing up from below??  Otherwise the plain seems to be flat, though a few areas show barely-resolved texture (possibly dunes of drifting frost?).  Towards the margins there are many greyer patches, especially near the mountains, reminiscent of patches on frozen lakes on Earth where wind has cleared snow cover from the ice.  Perhaps this also happens on Sputnik Planum?  But a few darker areas, directly alongside mountains or hills, might represent debris slumped from them, or even carried down as a fluidised flow from the eroded plains-and-hills terrain to the north.

Certainly there will be plenty to learn as the NH team receive the full set of images over the coming year.