For most of us, the central issue in taking up astronomy is deciding what type of telescope to buy. In previous decades things were somewhat easier in the sense that there were only a few types of telescopes manufactured, and of these the Newtonian reflector was by far the most common. They were also astronomical in price!
Today the situation is quite different. The optical components for telescopes and eyepieces can be manufactured easily and cheaply, thanks to techniques developed in the Far East. As a result there are now dozens of suppliers and many different telescope types on the market, many of them for reasonable sums of money.
The newcomer is likely to find a bewildering away of technical specifications listed with each telescope, and articles about observing often contain terms like ‘focal point’ or ‘folded optics’ – whatever could it all mean? In fact, many of these details are really quite simple and when you understand them, they will help you get the best out of your telescope and greatly improve your observing sessions.
In this article I shall discuss the three most common telescope types: the refractor, the Newtonian and the SCT, then look at magnification and how to calculate it. When it comes to recommending a telescope, my advice has always been: choose the best one which suits your needs and which you will find easy to use!

This type of telescope is the simplest in design, and it is probably what most people think a telescope should look like. This was the first telescope to be mass-produced, and was the type of instrument that Galileo used when he discovered the moons of Jupiter.
In Figure 1, I have given a drawing showing how the components of the refractor are laid out. At one end we have the objective glass. The light from a distant object passes through the objective glass, and is brought into focus at a point inside the tube: this is called the focal point, and the distance from the focal point to the objective glass is called the focal length of the telescope. The eyepiece at the other end of the telescope magnifies the image at the focal point and brings it into focus.
For the best results, we need the objective lens to be as large as possible. A larger telescope will collect more light, and the image at the focal point will be brighter. A brighter image means we can use eyepieces with higher magnifications and examine objects in greater detail.
Although the design of the refractor is very simple, it does have a number of drawbacks. White light is in fact compound: if you take a prism and shine white light through it, it breaks up into all the colours of the rainbow. Red light travels slightly slower through the objective glass than blue light, and as a result red light comes to focus at a slightly different point from that of blue light; this is known as chromatic aberration. The effect can be very pronounced and you will notice a coloured fringe or ‘halo’ around the object in the eyepiece in any refractor which is so afflicted.
The early refractors suffered enormously from this problem, and it was only the development of better glass production and advances in the physics of optics towards the middle of the 18th century that allowed the manufacture of more sophisticated lenses which dealt with the problem.
One of the first solutions was to ‘cement’ different types of lenses together: each piece has different refracting properties so that when brought together, they cause red and blue light to be focused at the same point. This type of telescope is called an achromatic refractor. Although achromatic refractors considerably reduce the problem of chromatic aberration, they never entirely eliminate it. In more recent times, objective lenses have been manufactured using elements like fluorite, which have the advantage of getting red, green and blue light to focus at the same point and almost completely eliminating chromatic aberration. Such telescopes are called apochromatic refractors; they give crisp images, but are expensive to manufacture and cost a great deal more than the achromatic type. 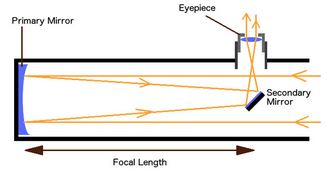 As we have seen, the early refractors were somewhat problematic. Apart from chromatic aberration, early objective glasses tended to have very long focal lengths (150ft in some cases!). This meant the telescope tubes were very long indeed. These ‘aerial telescopes’, as they were called, were incredibly unwieldy, but thankfully Isaac Newton invented a new type of telescope which was much easier to manufacture and to use.
Figure 2 shows the construction of a Newtonian telescope. Instead of an object glass, the primary objective is a concave mirror. Light enters the telescope tube and hits the main mirror. The light is then reflected back up the tube – but because the mirror is concave, it is brought to focus at a point inside the tube. This is the focal point of the Newtonian, and the distance from the focal point to the main mirror is its focal length. At the focal point we have a flat secondary mirror which reflects the focused image into the eyepiece where it is magnified.
Since the light is only being reflected (and not passing through glass), Newtonians do not suffer from chromatic aberration. However, the primary and secondary mirrors must be correctly aligned or collimated. If the telescope is not properly collimated then it can become impossible to focus the image in the eyepiece. You can tell if your Newtonian is not properly collimated – on a clear night, simply put a bright star in the centre of the field and defocus. You will see that it becomes a bright circle with a dark dot in the centre. The dot is actually the secondary mirror, and if it is not in the centre of the circle, the telescope needs collimating.
The primary mirror also needs to be situated correctly in the tube (and not at an angle) so as to reduce the effects of coma, again caused by light rays coming to focus at different places. Visually the effect of coma causes stars towards the edge of the field of view to become elongated rather than points of light.
If the primary mirror has a spherical shape, then this will also cause the light rays to focus at slightly different points (independent of their colour) and this phenomenon is called spherical aberration. A properly parabolic-shaped mirror will ensure all the light rays converge to the same point.
The secondary mirror obstructs some of the main mirror and if it is too large, there can be some loss of contrast in the image. However large primary mirrors are cheaper to manufacture than large objective glasses, so a 150mm Newtonian will be cheaper than a 150mm refractor. Since we usually want our telescopes to collect as much light as possible, the Newtonian has a definite advantage in being much cheaper and easier to produce 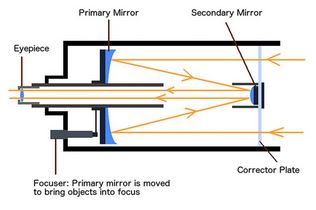 This type of telescope has become increasingly popular in the last few decades, and many manufacturers now mass-produce them. Because they use spherical mirrors they are much easier to manufacture than the Newtonian, so it is cheaper to produce large apertures. These telescopes have long focal lengths, but because of the folded optics inside, the actual tube of the telescope is very short which makes them easy to transport. My own 200mm Newtonian is nowhere near as portable as a 200mm SCT. You will often hear these telescopes referred to as catadioptric, which means they use a combination of both mirrors and lenses.
Figure 3 shows the construction of an SCT. Light from a distant object first passes through the corrector plate. The plate removes the spherical aberration which occurs due to the primary mirror being spherical. The light then passes down to the concave primary mirror at the back of the telescope and is reflected up to the secondary mirror which is convex. The light is then sent down through a hole in the primary to focus where the eyepiece is situated and the image can be magnified.
Both Newtonians and SCTs use a primary mirror, and eventually over time the silver backing of the mirror will start to degrade and it will need re-silvering (or resurfacing). How frequently this is needed depends on many factors; sea air for example will corrode the mirror quicker than that of a city. In the case of a Newtonian, the primary mirror can be easily removed and serviced. Normally the primary mirror of an SCT is housed in a sealed tube and it may be very difficult to access the main mirror, however this is less necessary given that the mirror is protected from the worst ravages of the atmosphere.
SCTs are usually sold on expensive mounts fitted with ‘goto’ facilities, enabling automatic computerised location of the object to be viewed. This is great if you don’t know your way around the sky and want to locate an object quickly, but it greatly increases the cost of the telescope!

Both of these focal lengths have to be in the same units for this to work; mm is the most common. So, my telescope has a focal length of 1000mm, and if I use a 5mm eyepiece then the magnification will be 1000/5 which is x200. However, the University of Leicester’s much larger telescope has a focal length of 3454mm, so the same 5mm eyepiece on that instrument gives a magnification of 3454/5 which is approximately x690.
A natural question arises here: ‘what is the highest magnification I can use?’ There is no precise answer alas, but a general rule of thumb is to divide the aperture of your telescope (in mm) by 0.5. So, for my 200mm telescope: 200/0.5 is 400, so x400 is about the highest magnification to use. For a 150mm telescope it is x300, since 150/0.5 is 300, and so on. There is nothing to stop you from trying to use x900 on a 100mm refractor, but the image will be so dim that you will see virtually nothing.
I should point out that this is only a rough guide; a few years ago I had some stunning views of Mars with my telescope at a magnification of x500. This year, Saturn resembled little more than a steamed pudding even at x125. The seeing (i.e. how steady the air is) and other conditions (like for example if your telescope is much warmer than the outside temperature, or the altitude above the horizon of the object being observed) can greatly affect the maximum magnification you can use on a given night.
Initially all of this may seem like a lot to take in, but it is worth putting in the effort of trying to understand these important concepts. The more you understand the telescope and equipment you have, the better and more rewarding your observing experiences will become.