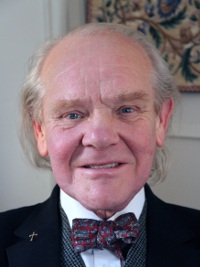 Dr. Allan Chapman, the well-known astronomical historian from Oxford University, has been awarded the prestigious Jackson-Gwilt medal of the Royal Astronomical Society.

Dr Chapman is well-known to the amateur astronomy community, for his books; for his appearances on television shows including The Sky at Night; but most of all for the many talks that he has given to astronomical societies around the UK.

The RAS citation reads as follows:

“The Jackson-Gwilt Medal is awarded for single investigations of outstanding merit in either: the invention, improvement or development of astronomical instrumentation or techniques; achievement in observational astronomy; or in the history of astronomy. The medal is awarded to Dr Allan Chapman, of the University of Oxford.

Dr Chapman is a renowned historian of astronomy. Through his extensive public lecturing, publications and television appearances he has brought astronomical history to new audiences. In doing so he has raised the profile of the history of astronomy and stimulated historical research.

Dr Chapman’s book, The Victorian Amateur Astronomer: Independent Astronomical Research in Britain 1820-1920 is of particular note and is an essential resource for any researcher of nineteenth-century astronomy. The Victorian Amateur Astronomer identifies and honours the “grand amateurs”, a term he used to describe a group of people, seemingly unique to Britain, who made major discoveries from privately-funded observatories or who popularised astronomy among the masses. Allan Chapman’s in-depth research documents the work and achievements of the often self-educated assistant astronomers, many of whom were previously unknown and who did so much of the ground-work that led to published results. The era spanned by his book is of great importance to British astronomy and it puts into social context the foundation of both the Royal Astronomical Society and the British Astronomical Association. Dr Chapman’s work for this publication resulted in the foundation of the Society of the History of Astronomy, a society which seeks to understand the history of astronomy and the important contributions by lesser-known figures in history as well as those who are more famous.”