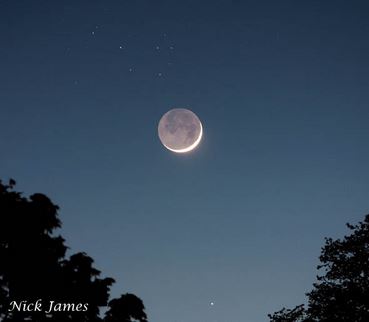 For many amateur astronomers, the Moon is often their first telescopic subject. The lunar surface is breathtaking in its beauty; the rugged terrain almost alive as the Sun rises and sets over the vast craters and mountains. Yet there is a phenomenon which is just as stunning, something which can be seen with the naked eye and binoculars when the lunar crescent is small. This is the effect of Earthshine.

The old Moon in the new Moon’s arms

If you go out and look at the thin crescent Moon in the evening sky, you will often notice that the night side of the Moon’s surface (i.e. the part not illuminated directly by the Sun) seems to be glowing with a faint orange-silver light. This phenomenon is called Earthshine, and the effect varies somewhat in appearance – at times it can be obvious enough to allow you to see the bright crater Aristarchus and other features in binoculars. At other times it is little more than a barely discernible glow. It may last for a couple of days or be present until almost first quarter. An old name for the phenomenon is ‘the old Moon in the new Moon’s arms’.

Earthshine is caused by sunlight reflecting from the Earth’s surface and illuminates the night side of the Moon. This light is then  reflected back to earth. As shown in Figure 1. When the Moon is new or a thin crescent, the Earth appears bright and very nearly full in the lunar sky. The sunlight is reflected from the Earth’s surface towards the Moon where it gently illuminates the night side of the lunar surface. This light is then reflected back from the Moon’s night side towards Earth and this is what we see as Earthshine. 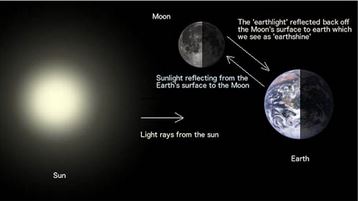 The reason Earthshine varies so much in appearance is due to the nature of the Earth’s surface: the Earth’s oceans reflect very little sunlight, around 10% in general. Landmasses and large continents reflect a little more back out into space, anywhere between 10-25% (the reflectivity will depend on the colour and nature of the landmass). Clouds however are highly reflective and can reflect as much as 50% of the light back into space.

All of these factors will affect how weak or strong Earthshine is at any particular time. For example, if the new Moon occurs when the Pacific ocean is facing the Moon, far less light will be reflected from the Earth than say if Africa and Europe were there instead. If a lot of clouds are present over the land masses at the time of new Moon, then we would expect the Earthshine to be rather bright.

A prominent Earthshine event caused the famous astronomer William Herschel to believe he was observing volcanoes on the Moon. In April 1787 Herschel reported ‘I perceive three volcanoes of the dark part of the new moon. Two of them are nearly extinct, or otherwise in a state of going to break out; the third shows an eruption of fire or luminous matter.’ Herschel was not viewing active volcanoes – as Schröter pointed out, the effect was due to light from the Earth reflecting off bright craters on the lunar surface. The three craters in question were most likely Aristarchus, Copernicus and Kepler.

The study of Earthshine can provide important clues to how the Earth’s ‘albedo’ changes over time. All the planets and moons in the solar system shine by reflected sunlight; only the Sun can generate its own light. The amount of sunlight a body reflects back into space is called geometric albedo. Astronomers measure geometric albedo on a scale from 0 to 1 where 0 is no reflection at all and 1 would mean all of the sunlight is reflected back. Venus has a high geometric albedo of 0.67, while the Earth’s is quite small at 0.37. By studying how Earthshine varies over time, scientists can determine how the cloud cover of the Earth is also varying.

Observing Earthshine is easy, but it needs a twilight sky to see it best. Simply go out at dusk when the Moon is just after new and appears as a thin crescent in the sky and see if you can see the night side of the Moon glowing like in Nick James’s photo. It’s a good idea to take a pair of binoculars or a small telescope and see if you can make out any craters or features on the night side. In particular, see if you can see the brightest lunar crater Aristarchus. Kepler and Copernicus craters might also be visible. You will find that it can change over the course of an hour, and may be present for a few days until first quarter. Earthshine can be seen at the time of waxing or waning crescent, but the waning crescent Earthshine is not as well observed since it occurs very early in the morning!