Inside the serpent’s head

Serpens is an ancient constellation which goes back to biblical time. It is also an unusual one in that it is the only constellation that comes in two parts. The head of the serpent, Serpens Caput, lies on the the west side of Ophiuchus and its tail, Serpens Cauda, lies to the east. Ophiuchus itself is the serpent holder, so although the constellations are separate they are also intrinsically linked. Ophiuchus is often identified as Aesculapius, a mythological healer who served on the Argo as the ship’s doctor.

Although its brightest star, alpha Serpentis, an orange giant star around 85 light years distant, is only magnitude 2.7, Serpens Caput is still readily recognisable from a dark site as a slightly stylised and much elongated question mark shape. What it lacks in bright stars however it makes up for in the single deep-sky treasure it contains: the brilliant globular cluster Messier 5 – a great ball of roughly five hundred thousand stars. 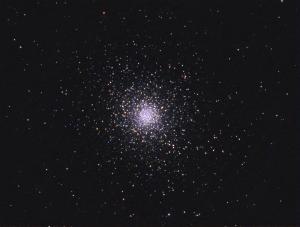 With the summer globular season almost upon us many onservers will be pointing their telescopes and cameras at M13 in Hercules. While this is undoubtedly a great cluster, and is often referred to as “the great northern globular”, M5 lying further south is frequently ignored. This is sad as in virtually all respects the two clusters are equal. Both have the same apparent diameter (20 arcsec), the same concentration class (class V), the same visual magnitude (5.8) and lie at similar distances, around 25,000 light years. The one major difference is that whereas M13 has a declination of +13 degrees that of M5 is only +2 degrees and so for UK observers culminates much closer to the horizon.

The discovery of M5 is generally accredited to Gottfried Kirch in 1702, with Messier observing it in 1764. It lies away from the main shape of the constellation at RA 15h 18.5m and dec +2 degrees (about 7.5 degrees south-west of alpha) so is not quite so easy to locate naked eye as M13 in Hercules which lies on the western side of the keystone asterism. But from a dark site, and certainly if viewed from further south, it is a clear naked eye fuzzy spot.

In a telescope M5 is everything a globular should be with a bright granular core, a bright halo and radiating curved chains of stars giving the impression of a huge multi-legged squashed spider. And in a large telescope – 35cm or greater – the cluster looks almost 3-dimensional. The image here by Andrea Tasselli shows just what a stunning object this really is.