Mercury says hello to the Pleiades 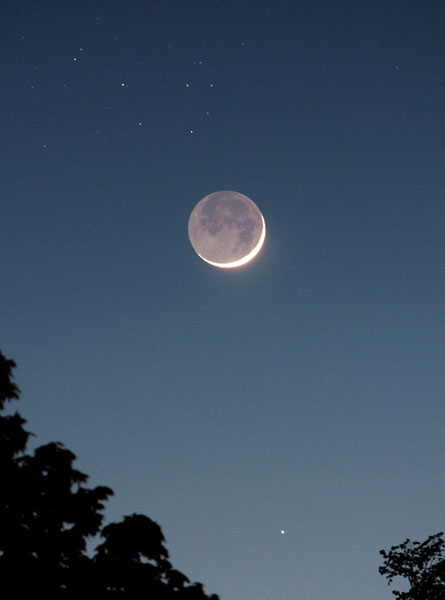 Mercury can be a difficult planet, not because it is faint, it can be an easy naked eye object, but rather because being so close to the Sun it only pops in to view for short periods in the morning or evening sky.

At the end of this month and beginning of May we have an opportunity to see it during its best evening apparition of the year (it reaches greatest eastern elongation on May 7). Also, on April 30 it passes within 2 degrees of the Pleiades star cluster (Messier 45) making an ideal observing and imaging opportunity.

To find Mercury on that date (binoculars will help here) follow the ecliptic down through Jupiter and Venus towards the horizon and once the Sun has set (around 19:20UT, 20:20BST) Mercury at magnitude -0.4 will be found around 18 degrees up.

Do make sure the Sun has set before you scan for the planet using any optical aid, as even the briefest view of the Sun through binoculars could result in blindness.

As the sky darkens Mercury should become an easy naked eye object and at 20:00UT it will lie 11 degrees above the horizon at an azimuth of 293 degrees. If you use a telescope it will show a phase of 56% and a disk diameter of 7 arcsec. By comparison, Venus will show a diameter of 16.7 arcsec and the giant planet Jupiter a diameter of 38 arcsec.

If you fail to see it on April 30 because of the fickle British weather all is not lost as Mercury and the Pleiades remain within a few degrees of each other for the next couple of days. On May 7, date of its greatest eastern elongation, at 19:30UT it will lie exactly midway between Venus and the point on the horizon where the Sun sets, although by now no longer close to the Pleiades.