NGC 253 a challenging galaxy in Sculptor

When I was Director of the Deep Sky Section I was once asked if I knew of any visual observations from the UK of the galaxy NGC 253. Although a beautiful object it has a declination of -25 degrees so is never going to be an easy target and will often be lost in the southern murk and light polluted skies. But the simple answer to the question is yes, there certainly has been an observation from the UK, and it was made in September 1783 by its discoverer – Caroline Herschel.

Caroline is now largely remembered as the recorder of her brother’s observations (complaining to him on one paricularly cold night that the ink had frozen in its bottle), but she was also a very able observer herself with a particular interest in comets and it was during such a hunt in 1783 that she swept up the galaxy using her 27-inch (focal length) X30 comet sweeper made for her by William. In total Caroline discovered 8 deep-sky objects. The sweeps usually being made when William was absent on business and she was no longer needed to act as amanuensis.

NGC 253 lies in Sculptor (a rather faint and unimpressive constellation whose brightest stars are only 4th magnitude) at RA 00h 47min 36s and Dec -25deg 18min. It has a Vmag of 7.2 but with a size of 26 x 6arcmin this gives it quite a low surface brightness which hinders its observation from the UK. Lying at a distance of around 9.8 million light years it is the brightest member of the Sculptor galaxy group.

Because ot its orientation to us we see it as cigar shaped, but it is classified as an intermediate galaxy between a non-barred spiral and a barred spiral. It is a star burst galaxy containing several massive star clusters and is also one of the dustiest galaxies known. A strong emitter of x-rays and gamma rays it is thought to contain a large black hole at its centre.

From skies further south (e.g. the Canaries) it is an easy binocular object and it would be interesting to know if it can be “bagged” in binoculars from a good site in the UK. Lying just 1.8 degrees south of the galaxy (at RA 00h 52min 46s and Dec -26deg 35min) is another challenge, the globular cluster NGC 288. At magnitude 8.1 it was discovered by William Herschel in 1785. It has a diameter of 13arcmin and is another easy binocular object from more southerly skies, making a lovely pairing with the much more distant galaxy. 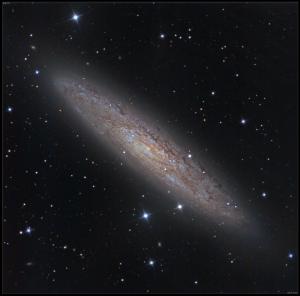 The stunning image of NGC 253 shown here was made by Damian Peach observing remotely with a 27-inch CDK telescope and FLI (Finger Lakes Instrumentation) CCD. The LRGB image was 90/10/10/10 minutes.

With the Moon currently out of the sky and Sculptor culminating around 20:00UT now is an ideal time to search out this galaxy. If you image it, and certainly if you observe it visually – that’s the challenge – do send your results to the Deep Sky Section or post them on the BAA Forum for others to see.