The star is of V magnitude 7.9 and is located in Aries, close to the border with Taurus and Cetus (see finder chart below).

The predicted path of the ~150-km wide shadow track crosses central/southern England, however, owing to astrometric uncertainties, an occultation may be witnessed from anywhere in England (the path also crosses part of Denmark/N. Germany/S. Sweden). The maximum duration of the event is expected to be 18 sec. The star is effectively a point source being 700 light-years distant and its apparent change in brightness will amount to 6 magnitudes (a factor of 250), and so if the event is positive from your location, the star will seem to disappear instantaneously.

We would like to encourage as many observers as possible to measure the times of disappearance and reappearance of the star since this will allow us to construct the silhouetted profile of this minor planet for the first time. If our coverage is sufficiently intensive with lots of observers monitoring the event, we may even detect a companion object if the system happens to be a binary asteroid, or discover that the star in question is a double.

A small telescope or tripod-mounted binoculars are likely to suffice, although the larger the telescope the better. A video camera is especially useful if the optics you are using enable the star to be continually imaged. If you can, add “time-marks” to the video: one way is to watch/listen to an accurate clock and flash a torch briefly into the optics say a minute or two before the occultation and then again just before recording is stopped, noting the exact times you switched the torch on. Alternatively, with video cameras, the preferred method is to use time-insertion software.

As a visual observer, you can try using a stopwatch facility, e.g. with an iPhone: start the clock using a source of accurate time (e.g. the BT speaking clock obtainable on “123”), press the laptime button if the star blinks out, and press again when it reappears, and then go back to your time source, pressing the laptime button of the stopwatch at a few other precise clock times.

Do try to observe this very rare phenomenon if at all possible – the more observations we receive, the more scientific value the achievement. Even if the star is not seen to blink out from your location, a negative observation is still valuable as it may help us to define the exact shape and size of the asteroid. Members of astronomical societies and clubs might consider launching a locally-run observing campaign with several observers taking up the challenge, all of which will improve the scientific contribution.

Please note that, if clear, the star will be well placed and visible towards the south-west at an altitude of more than 40 degrees. Note that a bright moon (93%-lit) will be situated some 13 degrees away and so try to shield the telescope/ camera from direct moonlight. The shadow track is guaranteed to pass somewhere across England during the observing window but success or otherwise will depend upon the local weather at the time. Please report observations to Tim Haymes: tim@stargazer.me.uk 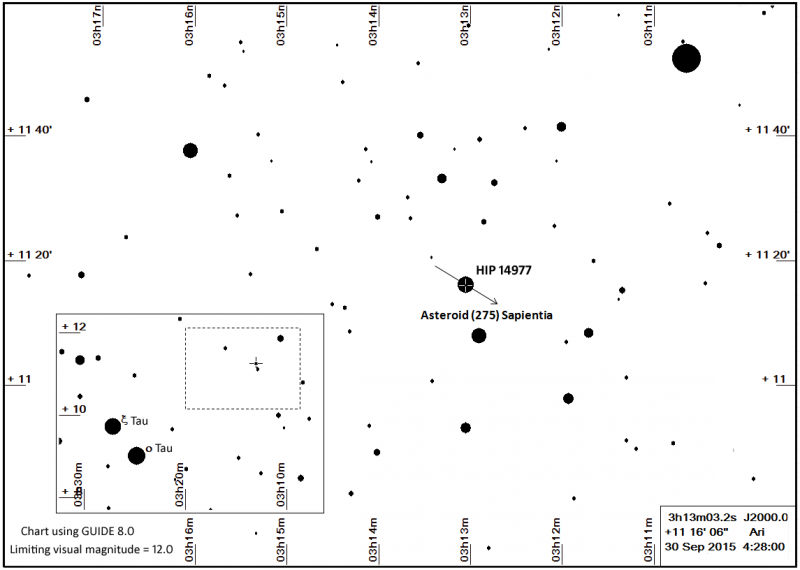