Many galaxies can be seen in small (say 10×50) binoculars from a dark site. You will not see any detail, but you will have the satisfaction of knowing you have glimpsed the photons from a star system several million light years distant with minimal optical aid.

The majority of these binocular galaxies will be much easier to see using a telescope, but there is one galaxy that because of its size and low surface brightness can be easy to sweep up in binoculars but very tricky to locate in a telescope, and that is Messier 33. I can remember many years ago when I was carrying out my “observe all the Messier objects project” that I struggled to locate M33 in a 200mm reflector and was staggered a few nights later to find that it was easily visible in 7×50 binoculars. In fact, like M31, it can be a naked eye object from a really dark site and I have certainly seen it from Kelling Heath in Norfolk.

M33, often known as the Pinwheel, was discovered by Charles Messier in 1764. It is a face-on spiral and a member of our local group of galaxies. It lies around 2.8 million light years distant so is slightly further away than M31, the Andromeda galaxy, and there are suggestions that it may be a satellite of M31. With a diameter of 50,000 light years it presents a size on the sky of around 70×40 arc minutes, so is quite a large object. 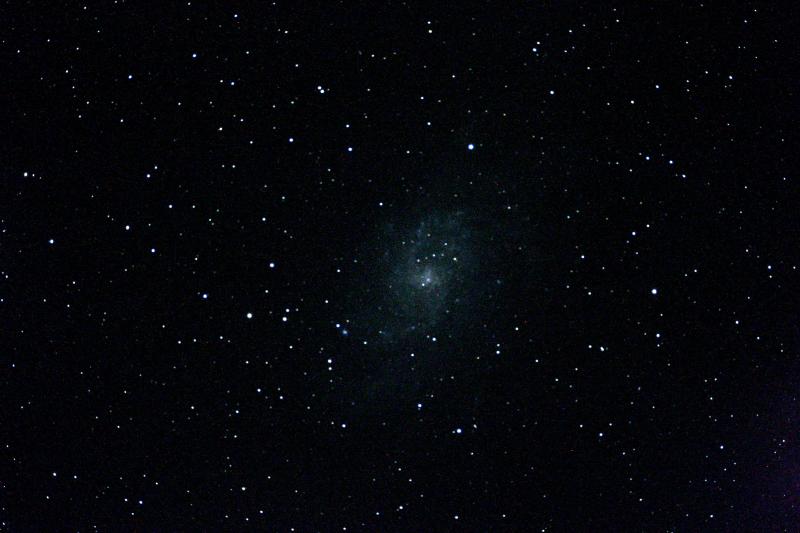 M33 lies in Triangulum at RA 1h 33.9m and declination +30 deg 39 arcmin. It has a magnitude of 5.7 which sounds bright, but because of its large size gives it a low surface brightness. An easy way to locate M33 using binoculars is to start at the galaxy M31, which should be a bright binocular object, and scan down through 2nd magnitude Mirach (beta Andromedae) and continue onwards for the same distance (a total journey of about 14 degrees). Look for a ghostly glow passing through the eyepieces. The photograph of the galaxy shown here was taken by Nick Hewitt in 2006 from Italy using a 115mm f/7 TMB refractor and Canon 350D camera.