See a whale in the night sky

Although Canes Venatici is a rather bland looking constellation – its brightest star being magnitude 2.9 Cor Caroli – the galaxy treasures that the constellation contains are quite remarkable. Its most famous resident is undoubtedly Messier 51, the Whirlpool Galaxy, the first galaxy in which spiral structure was detected, but there are 3 other Messier galaxies within its confines, M63 (the Sunflower Galaxy), M94 and M106. And, on its southern border, the impressive globular cluster M3. However, my favourite object in this constellation is not a Messier one but rather one that he and his observing colleagues missed – the edge on star burst galaxy NGC 4631 discovered by William Herschel in March 1787. 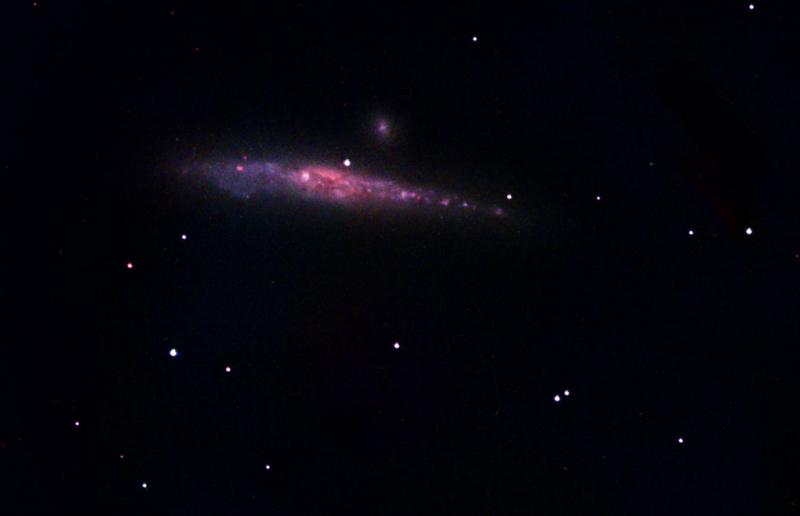 Commonly known as the Whale, this really is a stunning object. Visually there is something about seeing “thin” galaxies in an eyepiece that is hard to define but makes them appear really beautiful, and this is one of the best. It lies at RA 12h 42m 8s and Dec +32 deg 22 min 29 sec, so is well placed in the spring sky. At a distance of around 30 million light years it is thought to be similar in actual size to our own Milky Way galaxy.

With a visual magnitude of 9.8 and dimensions of around 15.5 x 2.7 arcmin it is easily visible in a 15 cm telescope lying east-west with a needle pointed west end and a more rounded east end while in a large telescope (50cm) it is absolutely stunning showing bright patches and mottling along its length. A 12th magnitude star lies on the northern edge of the halo to give a supernova scare to first-time viewers.

The image here was taken by Bob Winter from London using a Takahashi TSA 120 plus QSI 532 CCD camera. Also shown in Bob’s image is the associated galaxy (a dwarf elliptical commonly known as The Pup) NGC 4627. This galaxy has a visual magnitude of 13.1, although it always appears brighter than that to me, and is an easy object visually in a 35cm telescope from a dark site. Halton Arp catalogued the pair as Arp 281 in his 1966 Atlas of Peculiar Galaxies.