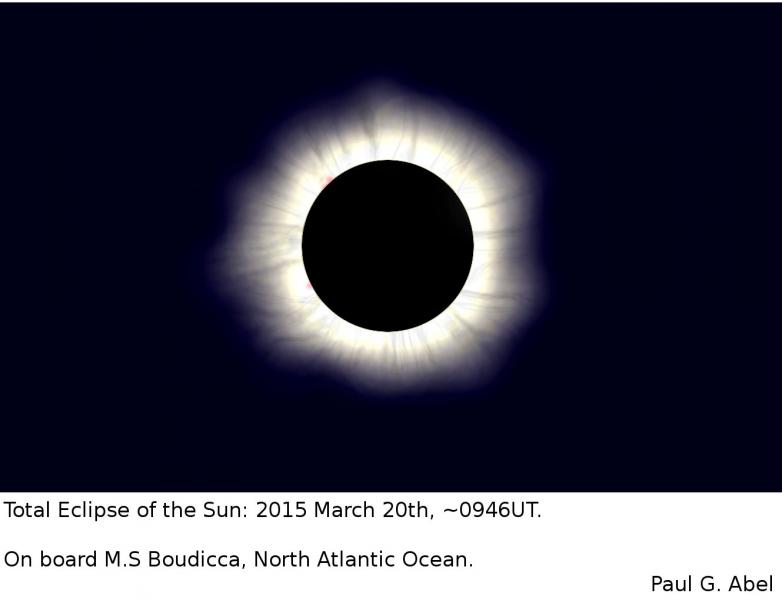 Below is an extract from my log book covering the observation of the Total eclipse which was viewed on board MS Boudicca in the Atlantic Ocean on 2015 March 20.

Tomorrow morning is the day of the eclipse, and expectations on board the MS Boudicca are decidedly mixed. I have now lost count of the amount of people who have asked both Pete and myself what the chances are of seeing the eclipse. What can one say? Logically, the only deterministic answer is “50:50- either we will observe it or we won’t” . Some of our party (notably Jon Culshaw) have retained the same level of optimism that they came aboard with in Southampton. Others- myself included- have more than a degree of caution given the recent weather stats.

At dinner tonight, Pete Lawrence once more checked the weather (thankfully the on board WiFi had decided to come back off strike for an hour). The new charts showed that the precipitation band had widened considerably, and the position we had first selected would now almost certainly be under a large bank of cloud. Pete quickly sent the captain a message, notifying him that we should not head to our last chosen site but rather continue NE along the eclipse track in the hope of finding a clearing. Given the motion of the ship (which is quite considerable tonight), I am assuming the captain is moving the ship as quickly as possible to our new location.

Alarm set for 0430UT, and although the weather is at present quite dreadful with strong winds buffeting the ship, I have experienced enough dramatic weather changes at sea recently to know that there is still hope that we might see something tomorrow…

What a day! Probably one of the most dramatic astronomical days I’ve ever experienced!! Events unfolded like so…

0511UT: Been out on deck for a look at the conditions- I wish I hadn’t bothered! Both Pete and myself were met with a howling blizzard and heavy snowfall! Not at all promising. A few other passengers are up and about all with the same resigned look. Thankfully, no one has yet stated the obvious…

0558UT: Pete and myself have set ourselves up in a reasonable position forward on deck 7, port side, outside the Lido lounge. A few other brave souls have similarly staked their ground and a few newcomers have huddled together like penguins. Things have improved however- the snow has now stopped and the strong wind continues to blow as we head ever northward. As dawn broke, it was clear that the sky was not a uniform grey- there were darker and lighter sections forming within. Moreover the cloud deck was not static, I am hopeful that cloud breaks will probably occur.

For the first time Jon was despondent- located him in the corner of the cafe giving the brightening sky a frowning of a lifetime and threatening the clouds with brown sugar in his own voice. I told him I felt conditions are improving however, he adopted an Alan Bennett look of quiet resignation.

0624UT: Had some breakfast with Kevin McNulty who was clouded out for his previous eclipse. As a true stalwart he was putting a brave face on it but I could tell he was gutted, so much so in fact that he was eating the sausage at breakfast- an act of desperation if ever there was one! People kept coming up and saying that it wasn’t our fault and at least they had seen the aurora. I pointed out that totality was still a good few hours away, and already the weather had improved!

Approx 0800UT: We’ve all just had our first sighting of the sun! Hope seems to be spreading rapidly throughout the ship. There can’t be many occasions when some 880 people clap and cheer as the sun appears from behind the clouds for the first time in the morning in the Atlantic ocean. Jon’s optimism has now returned and he is entertaining the folks out on deck. Similarly Kevin too is now starting to think we might actually see something. Tessa is turning into quite a photographer and the deck is now full of passengers. Tension on the ship is quite palpable! Personally, I’m taking it minute by minute!

Approx 0830UT: Pete has gone to the bridge to announce first contact and the start of the eclipse. He has rather left Tessa to it, with requests that she takes as many pictures as possible even though none of the cameras are in focus! Still, she seems to be doing rather well and has obtained some good images. Naturally I struggle to even locate the sun in the camera’s field of view. Pete has made me a filter to use with the camera, with luck I might snap a few pictures…

Approx 0840UT: First contact! Without a doubt, the edge of the dark limb of the moon can be made out on the limb of the sun. The eclipse glasses are rather good, and present a strong image of the solar disk when the clouds shift.

Sometime between 0840UT and 0920UT: The sun’s phase is now rapidly decreasing as the lunar disk passes over the sun. Conditions have rapidly improved and we are getting some excellent views of partiality. The excitement is building now as we are heading into large gaps of cloud. Will we see totality?

0930UT: I went up to the navigational bridge to announce totality was due in 15 minutes (this allowed Pete to continue with his photography.) The navigational bridge of M.S Boudicca is very impressive and a good place to view the eclipse! Captain Lars welcomed me and pointed out the large clear gaps dead ahead which he was steering the ship towards. Everyone on the bridge was just as excited as the folks down below. Elliot the cruise director was certain we were going to make totality. I made an announcement that totality was due in 15 minutes and that we seem to be heading into clearer skies so we might catch some of it. The captain ordered all staff on board to stop work and go outside and watch the eclipse just before totality, stressing to them that this was a remarkable event which no one on the ship should miss. I saluted him and quickly headed back down to deck 7.

Approx 0934UT: Things happening rather rapidly now. The thin crescent sun is starting to rapidly disappear and we have just passed into a vast clear space. The sky is now rapidly darkening and the temperature has dropped. In the darkened sky, Venus is shining brightly in the 9 o’clock position to the left of the partially eclipsed sun. Mercury can be made out on the other side in the 4 o’clock position, slightly orange in colour. I believe I can hear 880 heartbeats as totality approaches. Kevin has everything crossed and even Jon is now silent…

Approx 0936UT: The moon’s shadow rushed towards us, the horns of the sun joined and we had the first diamond ring. Afterwards totality occurred. It is almost impossible to describe what a serenely alien sight an eclipsed sun is in the sky- totally unreal, almost absurd. All of the excellent photographs of the event don’t really capture the visual aspect of it. There’s almost a three dimensional quality to it- the black disk of the moon looks like a void in the sky. Along the limb, the sun’s corona extends out into space and as one’s dark adaptation improves, it is shocking to realise just how far the corona extends. As one’s dark adaptation improves, so more structure becomes visible. To me the corona appeared to be slightly golden yellow in colour, the magnetic field lines appearing like delicate one dimensional lines etched into the corona almost as if the whole eclipse was the sculpture of some cosmic glass artist. The corona slowly changes and is by no means constant. Two prominences were also visible, the one in the 11 o’clock position (north upwards) being stronger than the one in the 8 o’clock position. In both cases the pink/red colour was absolutely striking. It is hard to explain, but I felt I could see gravity at work and hear the silent machinery of nature.

As everyone marveled in awe and silence at the spectacle, I couldn’t help but think of Sir Arthur Eddington and Frank Dyson. Back in 1919 the two of them had sailed to Principe, an island off the west coast of Africa. The eclipse they were about to view would change the world.

In 1919, a struggling German scientist called Albert Einstein had proposed a new theory of gravity called general relativity, and like its creator, the theory was largely ignored. Eddington had realised that if general relativity was correct then the upcoming eclipse could be used to verify the theory since starlight is bent by a gravitational field. Newtonian gravity predicted this too, but Einstein’s theory predicted a greater deviation of light about 1.75” away from the sun. The 1919 eclipse occurred in the Hyades star cluster and six months before, photographs of the cluster were taken. Eddington’s eclipse had a similar start to ours: the morning of the eclipse was wet and cloudy however by the time of totality there were large gaps in the clouds and the pair obtained some pictures of the eclipsed sun. When they returned to Cambridge they measured the position of the stars on the before and after plates: the stars near the sun had shifted position by precisely the amount demanded by general relativity; the result transformed Einstein into a celebrity, and his theory would go on to provide astonishing insights into nature for generations of scientists.

The second diamond ring then occurred, and I returned to our own eclipse. People cheered and applauded- against all of the odds we had seen it. Kevin slapped me on the back so hard I nearly went crashing into Pete’s cameras, and Jon had transformed into Patrick Moore which seemed very fitting- it was almost like having Sir P there.

I wish to note in this log that had it not been for the diligence of Pete Lawrence, the determination of Captain Lars combined with the flexibility of the Boudicca crew, we would never have seen the eclipse. Once Pete had found a better position for the ship, the captain acted swiftly to make sure we cleared the cloud bank which would have totally obscured the eclipse.

Shortly after totality: As rapidly as it started, so the eclipse came to a close. The light quickly returned to the sky as the moon’s shadow raced north east away from us. I had seen my first total eclipse in truly remarkable conditions! The captain made an announcement from the bridge that this was the most remarkable voyage he had ever made, his voice cracking with emotion. There was only two things left to do- tuck into the free bacon cobs provided then head to the Observatory bar on deck 9 for champagne!