In the west the bright star Arcturus is still 20° in altitude though its period of dominance in that part of the sky is nearly over. Above it we find the compact group that forms Corona Borealis, and closer still to the pole lies the faint and rather indistinct Hercules with its globular jewel of the northern skies, M13. Slightly fainter at magnitude 6.5 is another globular M92 that is an elder statesman of the universe. 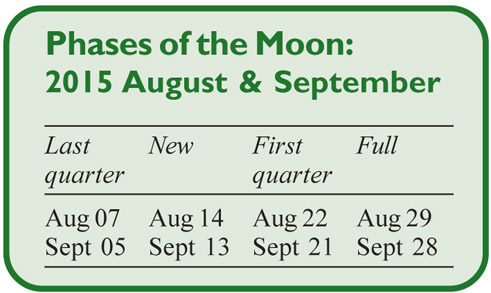 In the north Ursa Major lies to the west of the meridian and is still making its way sedately towards the horizon. It brings with it the lovely ‘Pinwheel Galaxy’, M101 at magnitude 7.7, and that contrasting pair of neighbouring galaxies M81 and M82. East of the meridian Capella is becoming more prominent as are Cassioipeia and Perseus, with the double cluster nearly 40° in altitude.

To the east, the autumn groups of Pegasus and Andromeda are well above the horizon whilst Pisces, which is still home to the planet Uranus, has just risen. Lying midway between the Square of Pegasus and the zenith is the tiny constellation of Lacerta (the Lizard) which was added to the sky by Hevelius in 1687. It has no bright galaxies or globulars, but it has a number of open clusters of which NGC 7243 (mag. 6.4) and NGC 7209 (mag. 6.7) are the brightest.

To the south the sky is dominated by the Summer Triangle, though considering its position and the time of year, Autumn Triangle would seem to be more appropriate. Vega lies west of the meridian with Altair and Deneb to the east, whilst a small group of constellations (Vulpecula, Sagitta, Delphinus and Equuleus) reach from the head of the swan to the head of the flying horse. Below the Summer Triangle the ‘Teapot’ of Sagittarius has passed the meridian and will soon be setting. The open cluster M25, that can be found within its borders, is still almost 20° in altitude and well worth a look.

Mercury passed through superior conjunction towards the end of July, so is technically an evening object during August. However, the position of the ecliptic in the evening at this time of year renders the planet practically unobservable. On the evening of Sept 4, when Mercury is at greatest eastern elongation, it sets just 25 minutes after the Sun. The last two apparitions have been poor ones as seen from the UK, but the upcoming morning one in October will provide slightly better views for those of us in northern temperate regions.

Venus has already been lost to the solar glare as the period begins, with the planet passing through inferior conjunction on Aug 15. It moves briskly away from the Sun to rise 90 minutes before it by the end of August. By the time September draws to a close this period has become well over 3½ hours, and Venus stands 30° in altitude in the east-south-east at the end of nautical twilight. At that time its phase has increased to 33% whilst its angular diameter has fallen to 33 arcseconds. In the last few days of September, Venus moves into Leo to join Mars and Jupiter as shown in the diagram.

Earth reaches the autumnal equinox at 09:20 BST on Sept 23. The equinox in fact occurs at a specific moment in time, the instant when the plane of the Earth’s equator passes through the centre of the Sun. It does not refer to a day when the periods of daylight and night are equal as is generally understood to be the case.

Mars was in conjunction with the Sun during June, and is now making its presence felt in the morning skies rising a little over 2 hours before the Sun by the start of September. By the end of the month that will have become 3 hours with the red planet clearing the horizon before 04:00 BST. During the period Mars’ brightness will have increased very slightly from 1.8 to 1.7 and its angular diameter will have grown from 3.6 to 4.0 arcseconds.

Jupiter will be in conjunction with the Sun on Aug 26 after which it moves west to become a morning object. Its rapid westward motion means that it rises 1¼ hours before the Sun by mid-September and by the end this time has grown to 2½ hours. Jupiter’s brightness remains constant at mag -1.7 although it apparent size is gradually increasing through the end of the period.

Saturn was at opposition in late May, so is now well past its best, but even at that time it culminated at only 20° in altitude. Sadly, this situation will not improve for some years to come, so from the UK Saturn will not be seen at its best, high in the sky. At the beginning of August, with the Sun 6° below the horizon, Saturn is already past the meridian and 18° high in the south-south-west. It is moving eastwards having reached its second stationary point on Aug 2. The angle of the ring system is increasing once more and will continue to do so for the rest of 2015.

Uranus, in Pisces, begins the period rising at 23:00 BST as it heads towards opposition on Oct 12 when it will shine at magnitude 5.7. By the last day of September it culminates at 01:30 BST at an altitude of 45°.

Neptune is in Aquarius and rises earlier than its ice giant neighbour, clearing the horizon by 22:00 BST at the start of August. It reaches opposition on Sept 1 with a magnitude of 7.8 and an angular diameter of 2.4 arcseconds.

(1) Ceres and (4) Vesta both rise before midnight BST, though Vesta is the better placed of the two. Ceres begins the period moving retrograde in Sagittarius, but reaches its second stationary point during September after which it continues direct motion. Having a declination of -30° which at the time of culmination equates to just 7° above the horizon, means observation from the UK will be severely restricted. Vesta, at dec -5°, fares much better reaching an altitude of a little over 33° as it crosses the meridian.

There will be a total lunar eclipse on the morning of September 28 with the whole event visible from the UK. The Moon first enters the umbral shadow at 02:07 BST and becomes fully immersed by 03:11. Totality lasts for 1 hour 10 minutes as the Moon begins to exit the central shadow at 04:23 BST having left it completely by 05:27. At this point the Moon is just under 14° in altitude as seen from Greenwich.

This stalwart of the warm summer meteor watches got under way on July 23 and will remain active to some degree until August 20. Maximum is predicted this year for 07:00 BST on Aug 13, so watches on the nights of Aug 12/13 and 13/14 could prove fruitful particularly as the Moon will play no part in the proceedings, being new on Aug 14. The radiant lies close to the Double Cluster in the Perseus sword handle, although with the meteors being extremely fast, often with persistent trains, they are seen over a wide area of the sky. [See also page 191 of the August BAA Journal].

In the table I’ve listed events for stars of magnitude 7.0 or brighter although there are many others that are either of fainter stars or those whose observation may be marginal due to elevation or other factors. DD = disappearance at the dark limb, whilst RD = reappearance at the dark limb. There is a column headed ‘mm’ to indicate the minimum aperture required for the event. Times are for Greenwich and in BST.

Sept 5 sees the Moon amongst the stars of the Hyades cluster resulting in a large number of events, many of which fall outside our criteria for inclusion. Aldebaran itself succumbs at 05:51 and reappears over an hour later when the Sun is at an altitude of +7°.

During the early hours of Sept 28 a total eclipse of the Moon occurs during which there are a considerable number of occultations of faint stars, the brightest of which is magnitude 9.2. 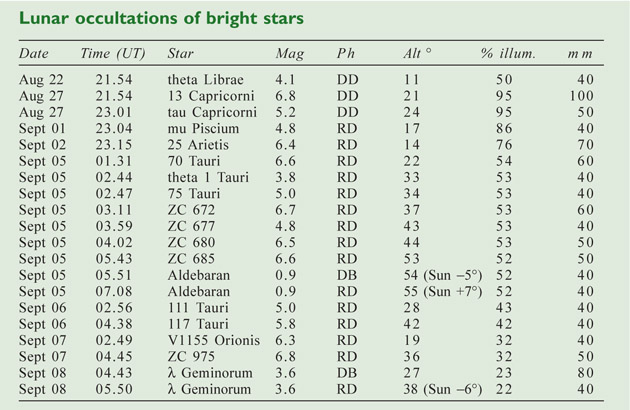 Two graze occultations occur during the period in question. Times are in BST. Observers are encouraged to attempt these events and submit results, negative as well as positive, to Tim Haymes at occultation@baalunarsection.org.uk