In the south Cancer, with the two open clusters M44 and M67, straddles the meridian. M44 in particular lives up to the description of an open cluster, being three times the size of a full Moon. M67 is smaller, around a third of the size of its larger companion, and is thought to have in the region of 500 members.

Below Cancer is the quite obvious shape of the head of Hydra, although the same cannot be said for the rest of the constellation as it winds its way to the southern horizon and beyond. A little later in the year it will be possible to follow all the twists and turns of the Sea Serpent once its tail has cleared the horizon.

If you have a good southern horizon look to see if you can find the two most northerly bright stars in Puppis, the Poop Deck or stern of the ship Argo Navis. This was, in mythology, the vessel that Jason and the Argonauts used in search of the Golden Fleece. The original constellation was so huge and unwieldy that the French astronomer Lacaille divided it into three separate parts, Puppis, Vela (the Sail) and Carina (the Keel).

Puppis lies astride the Milky Way and is extremely well provided in terms of open clusters, the most noticeable from UK latitudes being M47, at magnitude +4.4, and M93 at mag +6.2. Just 6° to the east of M93, within the borders of Canis Major, is the open cluster NGC 2362 at magnitude +4.4. The star Tau Canis Majoris appears to be part of the cluster but is, in fact considerably closer to us.

As we look towards the west we find Orion and his retinue are all still visible though Lepus and Canis Major will soon set. In between the meridian and Orion lies the faint and shapeless form of Monoceros, the Unicorn, whose brightest star is alpha at mag +4.3. In common with other constellations in the area the Unicorn has its fair share of open clusters and nebulae but has no bright galaxies. The brightest clusters are NGC2264 at mag +3.9 that is associated with the Cone nebula, NGC2232 also at magnitude +3.9 and M50 whose brightest stars are easily resolved in binoculars. The bright star Capella lies almost exactly due west at an altitude of over 55° with the Pleiades cluster midway between it and the horizon.

Looking to the north we find that two members of the Summer Triangle, Deneb and Vega are both visible close to the horizon. Above them Cepheus and Cassiopeia occupy the sky to the west of the meridian whilst to the east of it lie Draco and the two bears. 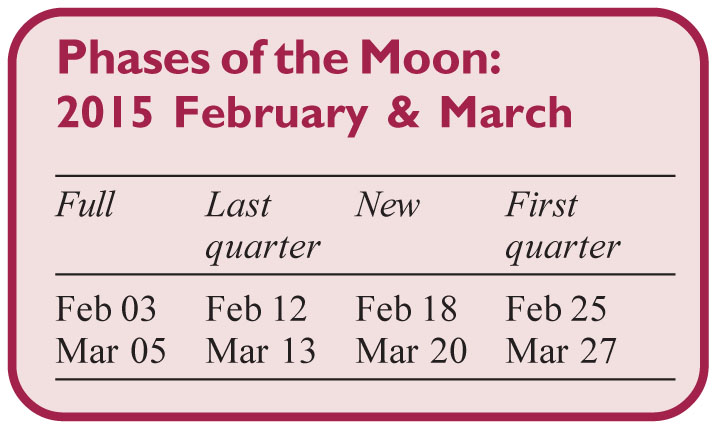 In the east at this time of year the ecliptic makes an angle of around 60° with the horizon compared with 20° six months later. This means that the planet Jupiter has reached an altitude of 55° at our time of viewing at the beginning of March.

Spica and almost all of Virgo have risen, as has Arcturus the brightest star in Boötes, the herdsman. Immediately north of Arcturus lies M3 (NGC5272) which is possibly the second finest globular visible from the UK. At magnitude 6.3 it is at the absolute limit of naked eye visibility, although binoculars will easily show it, whilst apertures of around 110mm will resolve it comfortably. Corona Borealis, that contains the two interesting variables R and T CrB, is now clear of the horizon. R CrB is an orange supergiant that undergoes sudden and unpredictable magnitude changes whilst T CrB is a recurrent nova that in common with others of this type, is a binary system.

Mercury passed through inferior conjunction at the end of January and subsequently moved west of the Sun to become a morning object. Greatest western elongation occurs on Feb 24 when it will be 27° from the Sun. This should be one of the best apparitions of the year, but the position of the ecliptic in the early morning during February and March means that not only does the planet rise less than an hour after the Sun, Mercury is less than 3° in altitude as nautical twilight ends. Following this poor showing the smallest planet moves back into the solar glare for a superior conjunction during the first half of April.

Venus is a brilliant object in the south-west, setting two hours after the Sun as the period begins. By the end of March it will set more than three hours after sunset giving it an altitude of 27° as civil twilight ends. This is thanks to both the planet’s northerly declination increasing rapidly, and the widening of the angle the ecliptic makes with the horizon. The planet’s brightness increases to magnitude -4.0 as its phase decreases to 78% during the two months in question.

Mars is still visible as a moderately bright but fairly inconspicuous object in the evening skies. It begins the period in Aquarius, but moves into neighbouring Pisces on Feb 11, and rendezvous with Venus on Feb 21 when the red planet will be half a degree north of its much brighter companion. As the distance between Earth and Mars continues to grow, so the magnitude and apparent size of the latter decreases further. Over the period its brightness drops from +1.2 to +1.4 whilst its size slips from 4.5 to 4.0 arcseconds. Mars is now moving gradually closer to the Sun, and by the end of March will be, in angular terms, just 19° from our parent star.

Jupiter continues to dazzle in the evening sky, rising at 17:15 UT at the beginning of February. The planet is still moving retrograde through Leo and into Cancer where it stays for the remainder of the period. The gas giant reaches opposition on Feb 6 when, as a disk 45.4 arcseconds across, it shines at magnitude -2.5. Its northerly declination causes it to culminate at an altitude of 55° meaning it is well placed for UK observers.

Saturn is an improving morning object rising at 03:00UT at the start of the period, and before midnight (UT) by the end of it. The ringed planet’s brightness rises from +0.5 to +0.3 and its apparent size from 16.2 to 17.8 arc minutes during the period, whilst the tilt of Saturn’s north pole relative to the Earth increases slightly improving our view of the ring system.

Uranus begins the period as an evening object, in Pisces, that sets more than five hours after the Sun meaning that once the sky is properly dark the planet is still at an altitude of more than 30°. Uranus moves briskly back towards the Sun and on the way, on March 6/7, it lies approximately midway between Mars and Venus, which have joined their more distant neighbour amongst the Fishes. By the end of March the planet is just 5° from the Sun as it approaches solar conjunction on April 6.

Neptune is an evening object in Aquarius at the beginning of February, lying less than 1° north of Venus that will act as a useful guide. The most distant planet moves swiftly into the clutches of the Sun and is in conjunction on Feb 26, after which it becomes a difficult morning object rising less than an hour before sunrise by the end of March.

(1) Ceres and (4) Vesta are both morning objects that rise soon after the Sun as the period begins and are poorly placed for observation. Even at the end of March Vesta, at mag 7.5 in Aquarius, rises only forty five minutes before the Sun and Ceres at mag 9.1, in Capricornus, rises less than two hours ahead of it. The dwarf planet Pluto lies nearby in Sagittarius.

On March 20 a total solar eclipse will be visible from parts of the North Atlantic including the Faroe Islands and Svalbard. A large partial eclipse is visible from the UK with over 87% of the Sun obscured from London, and the percentage increases the further north and west that you travel. From the Shetland Islands 97% of the Sun will be covered. Care must be exercised as is always essential when observing the Sun and particularly if young children are present around unattended optical instruments.

In the table I’ve listed events for stars brighter than mag 7.0 although there are many others that are either of fainter stars or those whose observation may be marginal due to elevation or other factors. DD = disappearance at the dark limb, whilst RD = reappearance at the dark limb. The column headed ‘mm’ indicates the minimum aperture required for the event. Times are for Greenwich and in UT.

A number of graze occultations occur during the period in question. Those with the brightest stars and largest cusp angles are most likely to be successful, although observers are encouraged to attempt any of these events and submit results, negative as well as positive, to Tim Haymes at occultation@baalunarsection.org.uk. For an example of what is possible, see page 9 of the current Journal. 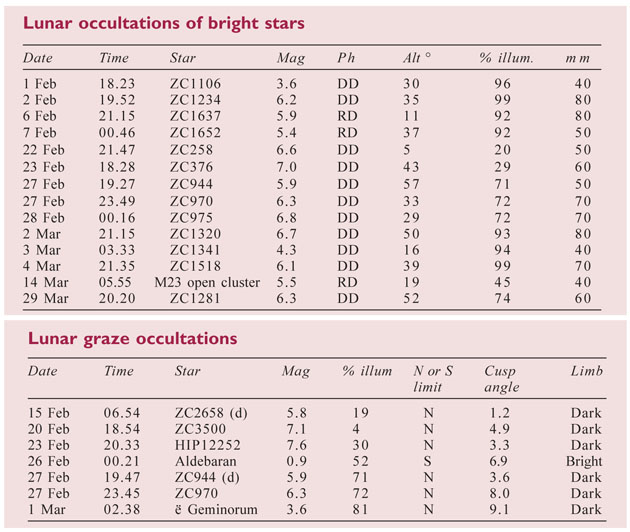