The other globular cluster in Hercules

With dark skies upon us once more (at least for a few hours) and the Moon currently out of the sky, many telescopes will no doubt be pointed at Hercules, now slipping towards the west in the late evening sky. It is not the most prominent of constellations, which is perhaps surprising considering the importance of Hercules in mythology, and the 4 stars of the Keystone can often be difficult to locate under a really good sky, but it contains a wealth of deep sky treasures: globular clusters (including the faint Palomar 14), open clusters, planetary nebulae and numerous faint galaxies.

Most amateurs will be aware of the 2 bright Messier globulars M13 (see teaser image) and M92 but there is another cluster lurking in the outer reaches of the constellation that is often overlooked and that is NGC 6229. With a diameter of 4.5 arc minutes and a visual magnitude of 9.4 it appears fainter and smaller than its Messier companions because of its greater distance from us (around 20kpc compared to 7kpc for M13) but it is an easy visual target in a 20cm reflector where it appears as a unresolved glow with some brightening towards the centre. Larger telescopes will allow resolution of many of its outer stars. It is located at RA 16h 47.0m and declination +47deg 32min, which puts it around 11 degrees north of M13. The chart here, produced using SkyMap Pro 11, shows all 3 globulars. 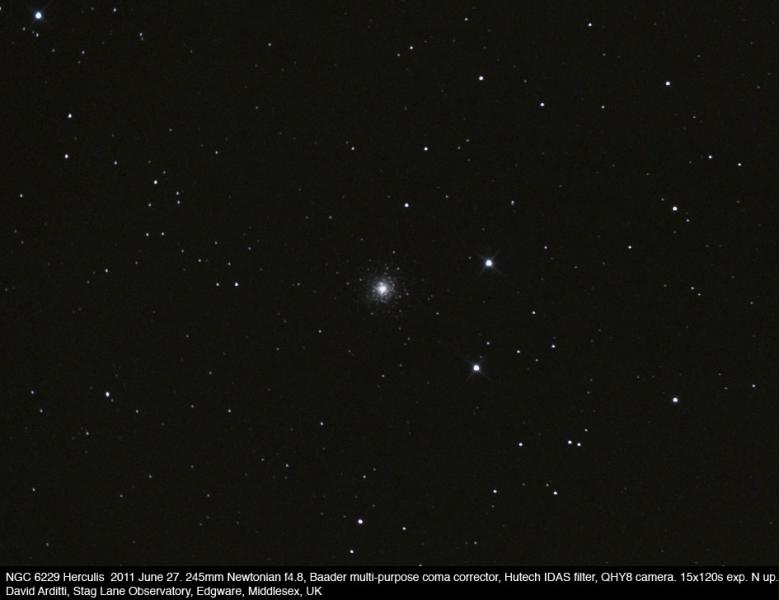 NGC 6229 lies in a pleasant star field and images easily. The image here was captured by David Arditti from his observatory in Edgware, Middlesex. It was obtained using a 245mm f/4.8 Newtonian fitted with a Hutech IDAS filter and QHY8 camera. The exposure was 15 x 120s and north is up.

If you are observing M13 during the next few days nudge your telescope a few degrees north and have a look at this often overlooked cluster. And if you enjoy globulars, there is always a magnitude 14.7 Palomar cluster to hunt down.