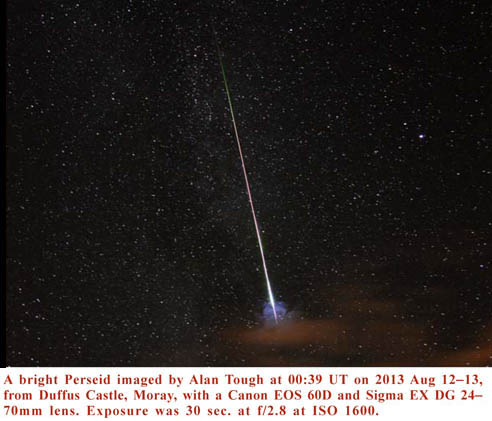 It may no longer be the most active meteor shower of the year – that distinction now rests with the Geminids of December – but there is no doubt that for observers living in northern temperate latitudes the Perseids in August are a firm favourite. Under cloudless skies, and from a dark viewing site, you can expect to see between 50 and 70 meteors each hour near the peak. Even from light polluted areas, observed rates may still be around ten meteors an hour in the early morning when the radiant is high. There is usually an abundance of bright, swift meteors – and this year the peak coincides with New Moon so conditions are very favourable!

Perseid meteors are visible from late July until the last week of August. The best observed rates are to be expected before dawn as the shower radiant at RA 03h 11m, Dec. +58° (near the Double Cluster, on the Perseus-Cassiopeia border) climbs higher in the eastern sky. Even in the mid-evening, however, the radiant is at a quite favourable elevation above the horizon.

With Perseid maximum this year expected at around 06h UT (07h BST) on Aug 13, the period from Wednesday night into the pre-dawn hours of Thursday morning (Aug 12-13) is likely to yield the best observed rates. Observers watching after midnight should note increasing Perseid activity towards dawn, with the actual peak occurring just after daybreak from the UK. Those further west should be able to observe slightly later, and closer to the peak time of the shower. Activity will be starting to decline by the time darkness falls on the evening of August 13. However, Perseid rates should be quite respectable on the nights before and after the peak of the shower – Tuesday night to Wednesday morning (Aug 11-12) and Thursday night to Friday morning (August 13-14).

The history of the Perseid stream goes back nearly 2,000 years, the first recorded shower being noted by Chinese observers on 17 July AD36. Since the Perseid stream is an old one we would expect the dust particles to be fairly evenly spread around the entire orbit. The oldest streams are the widest; shower duration is a week or more (three weeks in the case of the Perseids), the radiant is rather diffuse and rates are reasonably constant from year to year.

Enhanced Perseid activity accompanied the last return of the parent comet 109P/Swift-Tuttle in 1992 and was evident for several years up to at least 1997. The 2012 and ’13 returns of the shower yielded a single sharp peak with a ZHR ~100 meteors per hour (m/h), but the 2014 shower proved fairly ‘normal’, with a maximum ZHR ~70 m/h, more comparable with activity in 2010 and 2011, with the usual slow rise to and steeper decline from maximum. Clearly there are variations from year to year and we shall just have to wait and see what is in store for us in 2015.

Visual meteor observing is simple and requires only the very minimum of equipment. For guidance on visual observing, please visit www.britastro.org/meteor. The BAA’s visual meteor report forms, which are available as downloads in both pdf and Excel formats from www.britastro.org/node/4944, enable observers to record the details of each meteor seen. The large number of bright, swift meteors, many with persistent trains, in the five-day interval centred on Perseid maximum makes them an excellent target for digital imaging, particularly given the lack of interference from moonlight this year.

Whatever the approach and techniques employed, meteor observing should be viewed, first and foremost, as a source of enjoyment for the observer(s), and the only way to make sure you don’t miss out is to go out and observe!