The Sky in June and July

In the south Corona Borealis straddles the meridian with Boötes to the west and Hercules to the east. Hercules is far from eye-catching with no stars of the first magnitude and only two of the second, so a way of finding it easily is always useful. The simplest way to locate it is to draw a line from Arcturus, the very bright star in Boötes, through Alphekka, otherwise known as alpha CrB, and continue it generally north-eastwards. This will bring you to the faint quadrilateral known as the ‘Keystone’ which forms the lower part of the strong man’s body. With Hercules close to culminating it is an excellent time to view the two bright globular clusters, M13 and M92, that lie within its borders.

Immediately below Corona Borealis lies Serpens Caput, which forms the head of the Serpent whose dismembered tail, Serpens Cauda, lies on the opposite side of Ophiuchus. Within the head section lies another moderately bright globular cluster, M5, at magnitude 5.8. The tail section contains M16, the Eagle Nebula, brought to prominence by the Hubble Space Telescope and its image of one area that came to be known as the ‘Pillars of Creation’.

Closer still to the horizon we find the very obvious group of stars that form the head and claws of the Scorpion which contains the brilliant Antares, known as ‘Rival of Mars’ because of its ruddy hue. If you live in the south of the UK and have an excellent southern horizon, look to see if you can see any of the stars that make up the head of Lupus, the wolf, below Libra.

Turning to the west we see that Hydra and Cancer have all but disappeared with Leo the lion soon to follow suit. Lying generally north of Leo at this time are the two small constellations of Coma Berenices and Canes Venatici. Coma plays host to the north galactic pole so is perpendicular to the plane of the Milky Way with its associated obscuration by gas and dust. This allows a number of external galaxies to be seen, notably those in the Virgo and Coma clusters. It is also home to Melotte 111, an extremely loose open cluster with a large angular size of 5°, partly due to its comparative closeness, 290 light years, to Earth. 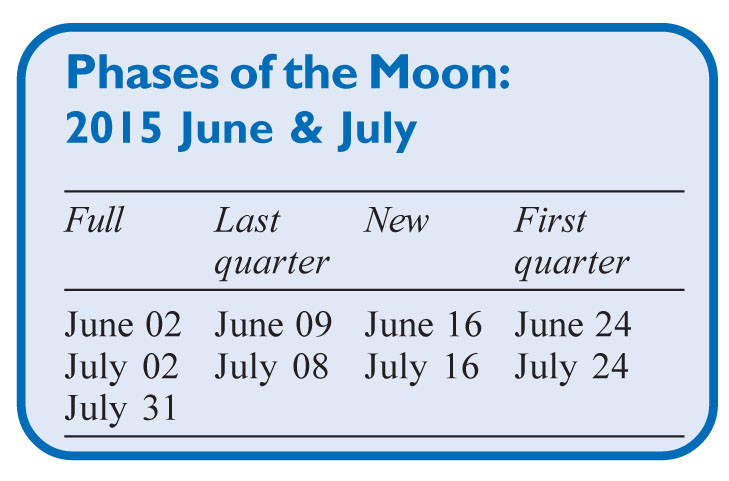 Canes Venatici is another faint constellation which was added by Hevelius in the 17th century, with the brightest member being the easily split double, Cor Caroli, whose components are magnitudes +2.9 and +5.6. Within the constellation lies the fine globular cluster, M3, at magnitude +6.3 and the superb but much fainter Whirlpool galaxy that is in the throes of interacting with the dwarf galaxy NGC 5195.

Looking north Ursa Major is beginning its descent to the west of the pole which signals that Cassiopeia and Cepheus are in the ascendancy. Within the borders of the larger Bear lie a pair of galaxies M81 and M82, whose appearances are very different. The former at mag 6.9 is a spiral also known as Bode’s Galaxy, after Johann Bode who discovered it in 1774. M82 was previously described as both ‘irregular’ and ‘peculiar’, but now seems to have been accepted as a ‘Starburst’ galaxy where massive amounts of star formation are taking place. In January 2014 Dr Steve Fossey and some of his students, working at the UCL observatory in Mill Hill, North London, observed a type 1a supernova that flared up in M82. It reached a maximum brightness of 10.5 but was affected by extinction of approximately one magnitude due to the interstellar medium.

Ursa Minor is pointing towards the zenith whilst Draco straddles the meridian north of it, making its twists and turns that much easier to follow. The tail of the Dragon, as it passes between the two Bears, contains the star Thuban which five thousand years ago, thanks to precession of the equinoxes, held the title ‘Pole Star’.

The Summer Triangle is again on view, with Vega almost due east at an altitude of 55°, along with an attendant group of small constellations that at this time of year lie in a line between Lyra’s brightest star and the horizon. As the night progresses the Milky Way through Aquila, Cygnus and Cassiopeia becomes more obvious although astronomical darkness will not return until the later stages of July. The double star Albireo, at the head of the Swan is almost 60° high in the south east and a delight to observe with its contrasting yellow and blue stars. A mere 8° below and a little to the west of Albireo lies the ‘Coathanger’ asterism. It is found within the confines of the small and faint Vulpecula but lies close to the border with Sagitta, which thanks to its shape is the more easily recognised of the two constellations.

Mercury reached inferior conjunction at the end of May and so begins the period moving west of the Sun to become a morning object. This will be a very poor apparition as seen from the latitudes of the UK with the best views being had from the southern hemisphere. Greatest elongation occurs on June 24 when the smallest planet, although 22° from the Sun, is less than 2° above the horizon at the end of nautical twilight. This renders it, to all intents and purposes, unobservable. Mercury then moves back into the clutches of the Sun and reaches superior conjunction on July 23.

Venus remains a superb evening beacon as June begins, shining at mag -4.4 almost due west at an altitude of 22°, although its decrease in declination as the month progresses means that by the time greatest elongation occurs on June 6, its altitude will have dropped by a few degrees. Venus is 16° to the east of the fainter Jupiter on the night of elongation, but the two move closer until on July 1 they pass fewer than 20 arcminutes apart. In the late evening of June 20 the two planets are joined by a waxing crescent Moon to make for an excellent photo call.

At the start of the period, Venus sets 3½ hours after the Sun, but by the end of June this has fallen to 2 hours. As July progresses the planet’s visibility decreases noticeably until, by the latter stages of the month, it is lost in the twilight as it moves towards inferior conjunction on August 15.

Earth reaches aphelion on July 6 when it will be 152 million kilometres from the Sun.

Mars passes through solar conjunction on June 14 after which it moves west of the Sun to become a morning object. It is therefore unobservable for the period, as keen eyes will be needed to spot it low down in the east-north-east at an altitude of 4°, on the last day of July, as nautical twilight ends.

Jupiter is still an evening object, well positioned in the west as the period begins, some 30° in altitude at the end of civil twilight. On June 10 its steady direct motion carries it back across the border from Cancer into neighbouring Leo. As the months progress the gas giant’s brightness continues to drop gradually from -1.9 to -1.7 as its apparent size also falls from 34 to 31 arcseconds. Its period of visibility is also shrinking and on July 1 it is just 10° high in the west with the Sun 6° below the horizon. By mid-month with the Sun in the same position, Jupiter is just 5° high and about to be swallowed up by the solar glare.

Saturn was at opposition during May and consequently is visible all night at the start of the period, though this window of visibility quickly shrinks. A declination of -18° equates to an culminating altitude of approximately 20° at this time of the night and year, so the planet will never appear very high in the sky; something that isn’t set to improve for subsequent oppositions. Movement is currently retrograde and both June & July are spent within the borders of Libra.

At the beginning of June, Saturn is already 14° high, with the Moon in close attendance, at the end of civil twilight. By the start of July the ringed planet is close to culminating at this time. Saturn’s brightness slips slightly from +0.1 to +0.4 though its north pole remains tilted towards us by around 24°, providing excellent views of the ring system. Titan, Saturn’s largest natural satellite, reaches elongation west on June 1 & 17 plus July 2 & 18. Eastern elongation occurs on June 9 & 25 and July 11 & 27.

Uranus is a morning object in Pisces rising two hours before the Sun at the start of the period, although by the end of July it rises before midnight (BST) and is 45° in altitude at the end of nautical twilight.

Neptune is also a morning object at the beginning of June, though it rises an hour ahead of Uranus. By the end of July it culminates in a relatively dark sky at an altitude of 30°. It will reach opposition in September.

(1) Ceres and (4) Vesta are both morning objects with the latter migrating from the southern reaches of Pisces into Cetus, and the former moving south from Capricornus into Microscopium before reaching the borders of Sagittarius by the end of the period.

In the table I’ve listed events for stars of magnitude 7.0 or brighter, although there are many others that are either of fainter stars or those whose observation may be marginal due to elevation or other factors. DD = disappearance at the dark limb, whilst RD = reappearance at the dark limb. The column headed ‘mm’ indicates the minimum aperture required for the event. As is usual at this time of year, occultations that occur at sociable hours are rather limited. Note that the Moon passes through the open cluster, M25, on the evening of July 1 although its phase will be 100% then. Times are for Greenwich and in UT.

Just one graze occultation occurs during the period in question. Observers are encouraged to attempt this event and submit results, negative as well as positive, to Tim Haymes at occultation@baalunarsection.org.uk.