The sky in October and November

In the east the winter constellations are making their presence felt, with Aldebaran and Capella both more than 30° in altitude whilst below them Orion and Gemini have cleared the horizon. The area roughly north of them contains a number of open clusters, the brightest of which is M35 at magnitude 5.1. The Hunter and the Twins hint at what is to come, in a few months time, when they command the skies towards the south. Above them all is Perseus, with the lovely double cluster consisting of NGC 884 and NGC 869, riding high at 75°.

Towards the south, Andromeda is on the meridian with M31 superbly placed, just 10° from the zenith. The giant spiral has a number of dwarf galaxies in orbit around it, the most obvious of which are M32 and M101, although both are of ninth magnitude. The constellation also contains two moderately bright open clusters; NGC 7686 at mag 5.6 and NGC 752 at mag 5.7. The former, with 20 members, has an apparent diameter of 15 arcminutes, whilst the latter, seen originally by Caroline Herschel, appears larger at 50 arcmin and is thought to contain 60 stars.

Save for Triangulum and Aries, the constellations below Andromeda and Pegasus consisting of Pisces, Cetus and Aquarius are, in the main, rather faint and formless. The only exception is the bright star Fomalhaut in Pisces Austrinus which shines at mag 1.1, although it will suffer a degree of extinction from the UK due to its low altitude. The two west-most stars in the Square of Pegasus point in its general direction if a line is drawn through them and extended southwards. 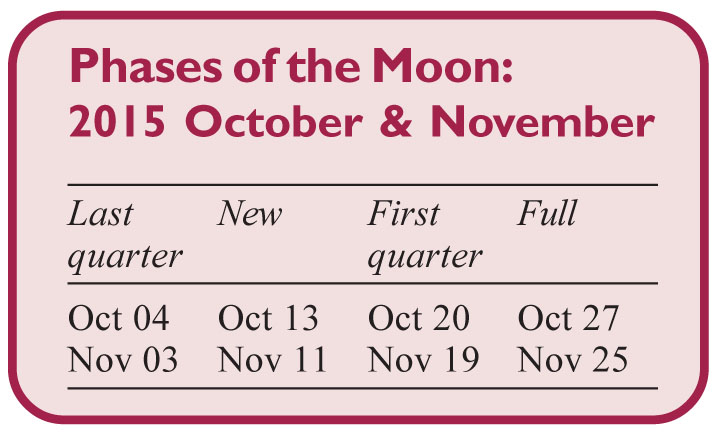 Looking west we find the Summer Triangle is well past its best, with Altair first in line to be lost to view. Deneb, in the celestial swan, now pointing nose down towards the horizon, will be the last of the three members to disappear. Between Cygnus and Aquila lie the two small groups of Vulpecula (the fox) and Sagitta (the arrow), the former of which contains the well known ‘Coathanger’ asterism. Hercules is setting, along with the two constellations that make his position that much easier to find, Boötes and Corona Borealis.

To the north, the Plough has passed its lowest point and is once again beginning to climb away from the horizon. Diametrically opposite the bear’s tail, on the other side of the pole, we find Queen Cassiopeia who currently occupies the zenith. Gathered around the familiar ‘W’ shape are a number of open clusters ranging in brightness from mag 6.5 to 7.5. Below Cassiopeia lies Cepheus, home to IC 1396, part of which is known as the ‘Elephant Trunk Nebula’ that is thought to be at least 20 light years in length.

Mercury is a morning object reaching greatest western elongation on October 16 when it will be 18° from the Sun and rising 1¾ hours before it. On that date it will be 11° high with an azimuth of 105° at the start of civil twilight and have a magnitude of -0.4. Following elongation it brightens until by the end of the month it is mag -1.0, although it now rises just an hour ahead of the Sun and has moved towards the east-south-east. Mercury is then lost in the twilight and passes through superior conjunction on November 17.

Venus is a superb morning object, rising 4 hours ahead of the Sun at the beginning of October. It reaches its greatest western elongation of 46° on Oct 26 when it shines at mag -4.4 from within Leo. Coincidentally, on that morning it passes 1° south of Jupiter and then moves on eastwards to rendezvous with Mars on November 3, passing 40 arcminutes south of the red planet having crossed the border into Virgo. There are photo opportunities around October 9 and November 7 when the three planets are joined by a very slim, waning crescent Moon.

Mars is a morning object rising a little over 3 hours before the Sun as the period in question begins, although by the end this has become 5½ hours. The planet gradually increases in magnitude (1.8 to 1.6) and apparent size (4.0 to 4.6 arcseconds) as its direct motion carries it through Leo and then into Virgo during the first days of November.

Jupiter is also a morning object, rising at 04:30 BST, 2½ hours before the Sun, at the beginning of October. By the end of November it is close to becoming an evening object, rising half an hour after midnight. It currently resides in Leo, a constellation that will be its home until 2016 August although it comes extremely close to the border with Virgo in the last days of this year. As a consequence of the distance between the planet and Earth now decreasing, both Jupiter’s apparent size and brightness are growing, and will continue to do so with the approach of opposition in 2016 March.

Saturn may just be glimpsed 10° above the south western horizon at the end of civil twilight as October begins. With a magnitude of +0.6 the planet will very slowly be lost in the twilight and become unobservable, certainly from the latitudes of the UK. The ringed planet is in solar conjunction on Nov 30 and should reappear in the morning skies in late December.

Uranus, still in Pisces, reaches opposition on Oct 12 when it will be mag +5.7 and have an apparent diameter of 3.7 arcsec.

Neptune is also an evening object having reached opposition in early September. It is currently in Aquarius at mag 7.7 with an apparent diameter of 2.4 arcsec.

(1) Ceres lies in eastern Sagittarius as the period begins but its eastwards motion carries it across the north western corner of Microscopium and into Capricornus. During October and November its brightness drops from 8.7 to 9.2.

(4) Vesta lies some way to the east of Ceres, rising a little before 22:00 at the start of October. It spends all of this period within the confines of Cetus as its magnitude slips from 6.2 to 7.5.

The Draconids are a brief shower whose normally low activity is expected to last from October 8 to 10 with maximum on the evening of Oct 9. The radiant lies close to the ‘head’ of Draco, which is well placed as soon as the sky is dark. The ZHR is expected to be 2 or 3, although in 2011 greatly enhanced rates were seen for a short period.
The Orionids are active from October 16 to 30 and have a flat maximum that lasts from Oct 21 to 24 when ZHRs of 25 are predicted. The shower radiant, which lies a little to the north of Betelgeuse, rises at 21.30 BST. A gibbous Moon in the southwest sets soon after midnight, by which time the radiant has an altitude of 30°.

The long running Taurids begin on October 20 and last until November 30 with double maxima occurring on Nov 5 and 12. A waning crescent Moon rises just after midnight on the night of Nov 5/6, but there are no such problems for the later maximum. A ZHR of around 10 is expected with the possibility of some bright events.

The Leonids last from November 15 to 20, with a short sharp maximum predicted for 08.00 UT on Nov 18 when the ZHR is expected to be around 20. The particles that cause the Leonids are travelling extremely quickly, around 70 km/s, and are the debris left behind by comet Tempel-Tuttle whose period is 33 years. The radiant lies in the ‘Sickle of Leo’ and rises around 22.30 on the night of maximum, an hour after a waxing crescent Moon has set. 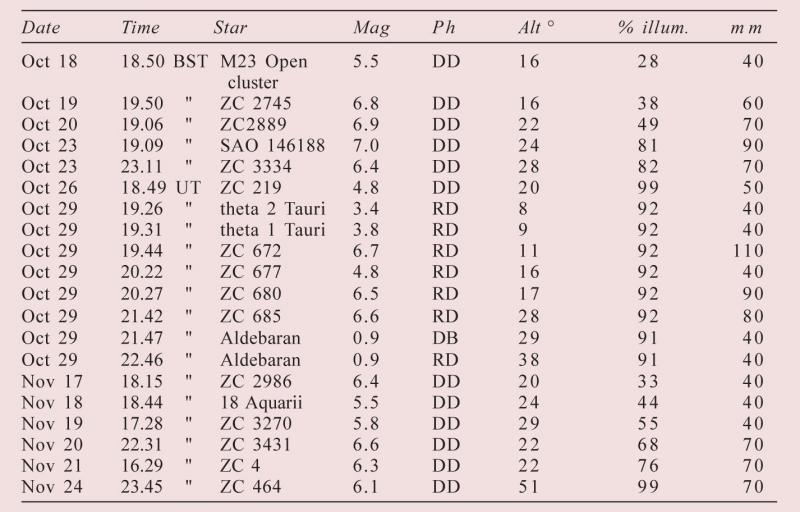 In the table I’ve listed events for stars of magnitude 7.0 or brighter, although there are many others that are either of fainter stars or those whose observation may be marginal due to elevation or other factors. DD = disappearance at the dark limb, whilst RD = reappearance at the dark limb. There is a column headed ‘mm’ to indicate the minimum aperture required for the event. Times are for Greenwich and in BST or UT as indicated.

October 29 sees the Moon passing through the Hyades cluster and culminating in an occultation of Aldebaran, which is one of only four first magnitude stars that can suffer this fate. The star initially disappears behind the bright limb, reappearing an hour later at the dark lunar limb.

Four graze occultations occur during the period. Times are in UT. Observers are encouraged to attempt these events and submit results, negative as well as positive, to Tim Haymes at occultation@baalunarsection.org.uk. More details are available in the current BAA Handbook.

Don’t forget that British Summer Time will end on Sunday October 25 at 02.00 BST.