In the south Hydra, with Corvus and Crater riding on its back, is straddling the meridian. The head of the sea-serpent, made up of stars whose distances vary enormously, lies just below Cancer whilst the end of the tail is just 12° south of Spica. Hydra contains a large number of galaxies, most of which are faint, a large open cluster and the ‘Ghost of Jupiter’.

The latter is more correctly known as NGC 3242 and is a tenth magnitude planetary nebula close to the border with Monoceros, which needs an aperture of around 100mm to show it clearly. The open cluster M48 is large at almost 55″ across and at magnitude 5.8 is at the very limit of naked eye visibility when atmospheric extinction is taken into account. The report of its discovery seems somewhat ambiguous as Messier initially made an error in recording its position, thus allowing Caroline Herschel to be credited in some quarters.

Above Hydra we find the Zodiacal groups of Virgo and Leo, and then closer to the zenith still, lie Leo Minor and Canes Venatici, both added by the astronomer Hevelius in 1687.

Turning to the west we see that, save for Auriga with bright Capella and Gemini with Castor and Pollux, the bright winter groups have all but left the stage. M44, the open cluster in Cancer better known as the Beehive or Praesepe, is still well positioned at an altitude of 45°. Given its size and brightness and the fact that it had been identified by Ptolemy, it is something of a surprise that it was catalogued at all by Messier. It is hardly likely to be mistaken for a comet, which after all, was the original point of his catalogue. With an angular size of 95″ it is an ideal candidate for binoculars or a rich field telescope.

In the north the constellation of the Great Bear commands the zenith. Draco lies entirely to the east of the meridian with the head of the dragon pointing the way to Hercules. Opposite Draco lies the faint and unremarkable group of stars that loosely make up Camelopardalis, the Giraffe. There is an open cluster, NGC 1502 at magnitude 5.7, and a number of faint galaxies, but apart from a few variable stars there is little in this area to linger over.

To the east the brilliant Vega is already more than 20° in altitude, a sign that summer is not far away. The faint constellations of Ophiuchus, Serpens and Libra are coming into view, although there is compensation by way of Arcturus and the lovely Corona Borealis. The presence of Hercules means that the superb globular cluster M13 is now once again visible. 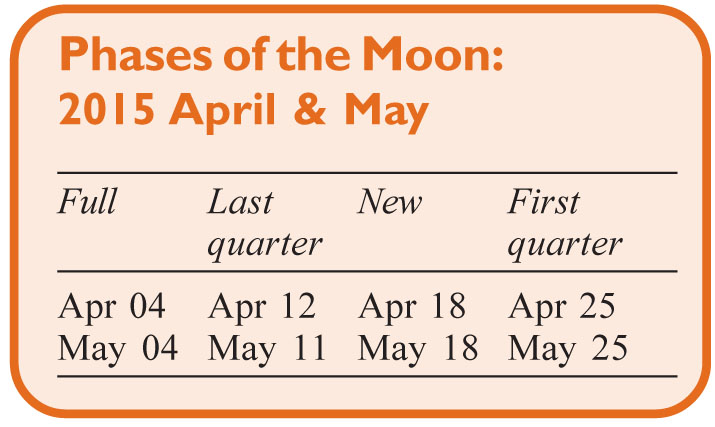 Mercury reaches superior conjunction on April 10 after which it moves east of the Sun to become an evening object in what will be the best such apparition of the year. Greatest eastern elongation will be reached on May 7 when the smallest planet’s elongation will be 21° and it will stand 11.5° above the WNW horizon at the end of civil twilight. Following this Mercury will slip back into the Sun’s clutches and reach inferior conjunction on the last day of May.

Venus is more than 30° above the western horizon at sunset on the first day of the period. It very much dominates the western sky and at mag -4.0 at the beginning of April to -4.3 at the end of May it is surpassed in brightness only by the Sun and Moon. The planet’s position continues to improve as it moves further north of the celestial equator, setting four hours after the Sun at the start of May. Venus’ phase decreases from 78% to 53% whilst its apparent size rises from 14″ to 22″. Its eastward journey, that begins in Aries, carries it through Taurus, passing 2.5° south of the Pleiades on April 11, and across most of Gemini, almost reaching the border with Cancer by the end of the period.

Mars continues its own easterly journey from Aries into Taurus although it is gradually moving out of sight. As the period begins the red planet sets a little under two hours after the Sun but by the start of May this has been reduced by half and the planet at magnitude +1.5 is effectively lost in the twilight glare. It will be in solar conjunction on June 14.

Jupiter begins April moving retrograde but reaches its second stationary point on April 8 after which it resumes direct motion from west to east. Although past its best (it fades from -2.3 to -1.9) it is still a striking object almost due south at 21:00 UT at the start of the period. Make the most of the gas giant now because, by the end of May, it will be lost to us by midnight. The Galilean moons provide their own ever-changing spectacle that can be viewed quite adequately with a pair of binoculars.

Saturn rises soon after 23:00 UT at the start of April and is moving retrograde (westwards) through Scorpius, crossing the border into Libra in late May. It reaches opposition on May 23 when its magnitude will be 0.0 and its apparent size will be 18.5″. The planet’s north pole will be tilted towards us by almost 25° providing us with some superb views of the ring system. Sadly Saturn’s southerly declination, -18° at opposition, means that it will not be at its best as it culminates at just over 20°. This continues for the next few years until 2020 when Saturn’s fortunes begin to look up. By 2022 its altitude at culmination on the night of opposition will be 23.5°. Titan, Saturn’s largest moon is at eastern elongation on April 6 and 22, plus May 8 and 24. It is at western elongation on April 14 and 30 and also May 16.

Uranus is in conjunction with the Sun on April 6. Following this it moves swiftly west of the Sun to become a morning object in its long-term home of Pisces. By the end of May it rises two hours before the Sun, though it will be August before it is technically an evening object again.

Neptune is a morning object in Aquarius, rising an hour before the Sun as the period begins but three hours before it at the end.

(1) Ceres and (4) Vesta are both morning objects, the former in Capricornus and the latter in neighbouring Aquarius.

The Lyrids are active from April 18 to 25 with maximum occurring towards midnight on Apr 22. The ZHR at max is expected to be in the region of 10 but there have been outbursts, most recently in 1982, when rates rose to around 90 meteors per hour.

In the table I’ve listed events for stars of magnitude 7.0 or brighter although there are many others that are either of fainter stars or those whose observation may be marginal due to elevation or other factors. DD = disappearance at the dark limb, whilst RD = reappearance at the dark limb. The column headed ‘mm’ indicates the minimum aperture required for the event. Times are for Greenwich and in UT. 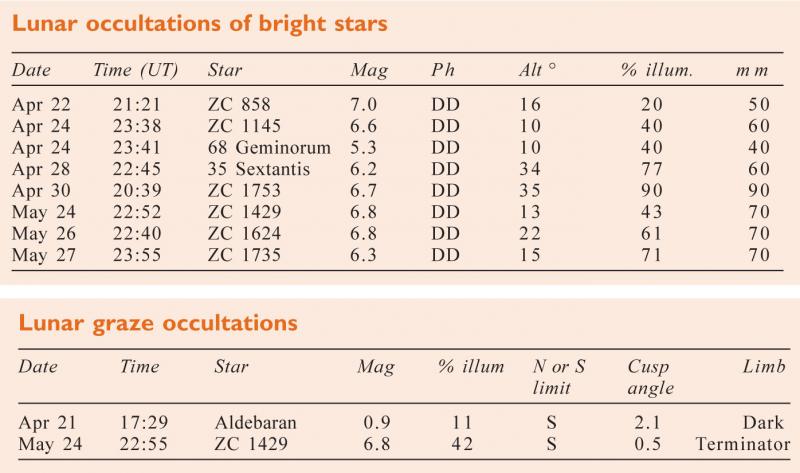 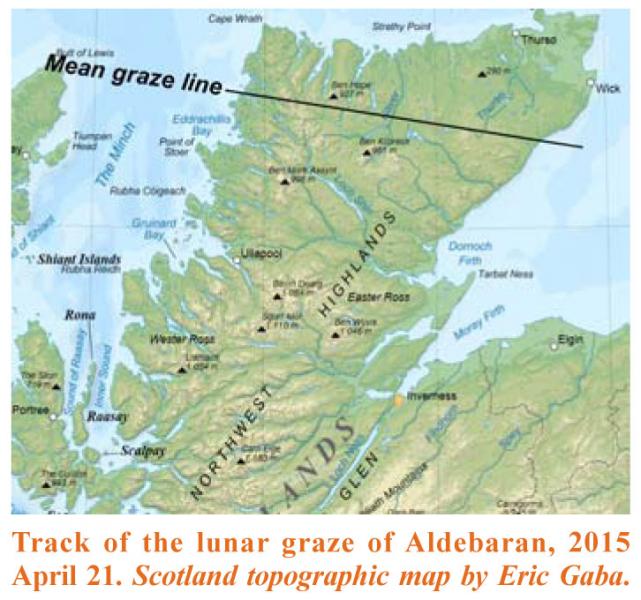 A number of graze occultations occur during the period. Those with the brightest stars and largest cusp angles are most likely to be successful, although observers are encouraged to attempt any of these events and submit results, positive as well as negative, to Tim Haymes at occultation@baalunarsection.org.uk

The Aldebaran graze occurs in the late afternoon/early evening and is only visible across the far north of Scotland (see map). As it is a southern limit event everyone south of the graze track will see a miss.

There will be other chances this year to see Alpha Tauri occulted, namely Sept 5, Oct 29 and Dec 23, although these are all total occultations rather than grazes. More information can be found in the Handbook of the BAA.