In the north the bright star Vega is about to be lost below the horizon, leaving just one member of the Summer Triangle on view. The Great Bear stands on its tail to the east of the pole, whilst diametrically opposite lies the constellation of Cepheus. Within its borders is IC1396, The Elephant’s Trunk Nebula at magnitude 3.5, which should be visible under ideal conditions although, by its nature, it is a diffuse object. There is also a smattering of open clusters, the brightest of which is NGC 7160 at mag 6.1.

Ursa Minor appears to ‘hang’ from the Pole Star at this time of year, whilst Draco curls beneath it with the dragon’s head pointing towards the now recently set Hercules. North of the Little Bear and straddling the meridian lies the faint collection of stars that makes up the indistinct constellation of Camelopardalis. Save for a few faint galaxies and the open cluster NGC 1502 at mag 5.7, there is little in the area to linger over. As the Plough climbs higher in the sky, those intergalactic neighbours, M81 and M82 at a current altitude of 50°, become more and more accessible and enticing particularly for the imagers among us.

Turning towards the east we see that Leo has just cleared the horizon, whilst above the Lion lies the faint outline of the celestial Crab. Cancer contains the open cluster M44, which has a nebulous appearance to the naked eye, although binoculars will easily resolve individual stars. The fact that Messier included such objects in his catalogue has always been a matter for conjecture. He began recording anything nebulous simply because, as a comet hunter, he wanted to avoid any comet-like object that could lead to confusion. As well as M44 he also included the Pleiades (M45) because, it is argued, he wanted to outdo his French rival, La Caille, who had catalogued 42 nebulous objects from the Cape of Good Hope.

Below Cancer is Hydra, the Water Snake, the largest of the 88 modern constellations, covering just over 1,300 square degrees. The head of the Snake is obvious, just south of the Crab, whilst its tail borders Centaurus and is best seen during late spring and early summer evenings.

Looking south, Capella is less than 10° from the zenith and just east of the meridian. Below it Aldebaran has already crossed that threshold and ahead of it lies a selection of constellations, Eridanus, Cetus and Pisces, which are faint when compared to the dazzling groups that follow in its wake. Just to the east of the meridian we have Orion and his retinue that together typify the cold, crisp and frosty nights of winter, when the Hunter and his dogs command the southern sky. The Orion nebula is always a favourite of imagers, because even those with a DSLR and a telephoto lens can record something of the beauty of that area.

Towards the west the Square of Pegasus will soon be lost from view. Andromeda, which reaches upwards from the top left corner of the Square, points towards the zenith with M31 still at a very respectable altitude of almost 50°. The line of Andromeda, if followed north, leads towards Perseus with the well known double cluster in his sword handle. Also within the borders of Perseus we find M34, an open cluster that should be just visible to the naked eye, and the near neighbours NGC 1545 and NGC 1528. These are both open clusters of magnitudes 6.2 and 6.4 respectively that at this time can be found just 5° from the zenith.

Mercury begins the period as an evening object, reaching greatest eastern elongation on Dec 29 when, in angular terms, it is 20° from the Sun. Even then it will be a difficult object to locate being just 6° above the south western horizon at the end of civil twilight. Mercury then passes through an inferior conjunction on Jan 14 to emerge as a morning object. The limited altitude of the ecliptic at that time will not make it a particularly good apparition.

Venus remains a brilliant morning object almost 30° above the south-south-eastern horizon at sunrise as the month begins. Because it rises so far ahead of the Sun (four hours at the start of December) it can be seen against a perfectly dark sky. At those times it is magnificent at magnitude -4.2. During the period the planet’s phase increases from 67% to 83%, while its apparent size falls from 17.7 to 12.2 arcseconds.

Mars is also a morning object although it is the poor relation in terms of brilliance. It is however, growing gradually brighter, and during the two months covered here it increases from mag +1.5 to +1 ahead of opposition in 2016 May. The increase in magnitude is matched by an increase in apparent size with the red planet growing from 4.7 to 6.6 arcseconds. At the beginning of December it rises more than five hours ahead of the Sun, although it will be late March before it becomes an evening object once more.

Jupiter also begins the period as a morning object, though it rises only twenty minutes before midnight, and ends with the gas giant becoming visible around 20:30 UT. Its brightness climbs slightly, from -1.9 to -2.3, while in angular terms it grows from 35.5 to 42.3 arcseconds. Jupiter spends the whole of December and January within the boundaries of Leo, reaching its first stationary point on January 8.

Saturn reached solar conjunction on November 30 and so is temporarily lost to observers. However, it reappears in the morning sky, in Ophiuchus at magnitude +0.5 and rises a little over two hours before the Sun on the last day of the year. The ringed planet passes just 0.1° south of Venus on January 9.

Uranus is an evening object in Pisces, and moderately well positioned, culminating at an altitude of 45°.

Neptune, in Aquarius, lies further east than Uranus and crosses the meridian at a height of 30° around 18:00 UT as the period begins. By the end of January it is moving into the twilight and sets two and a half hours after the Sun.

(1) Ceres and (4) Vesta. Ceres spends most of these two months in Capricornus, but moves eastwards into Aquarius in mid-January. Vesta spends the entire period in Cetus apart from a brief sojourn in Pisces for a few days in December. On the last day of that month it is less than 6° south of Uranus at magnitude 8.2.

The Geminid meteors are active from Dec 8 to 17 and are the year’s most productive shower with predicted ZHRs of 100+ at maximum on Dec 14 at 13:00 UT. Sunset that night is around 15:45 with the radiant rising an hour later. A plus for this shower is that the Moon will cause no problems this year, so if the sky is clear, watches in multiples of 30 minutes should be attempted.

The Ursids begin on Dec 17 and last until Christmas Day. Maximum occurs on the night of Dec 22/23 when a ZHR of 10 is expected. There is a waxing gibbous Moon that night although it is some way from the radiant.

The Quadrantids are active from January 1 to 6 with maximum on January 4 at 09:00 UT. A waning crescent Moon rises at 02:00 on that morning.

In the table I’ve listed events for stars of magnitude 7.0 or brighter although there are many others that are either of fainter stars or those whose observation may be marginal due to elevation or other factors. DD = disappearance at the dark limb, whilst RD = reappearance at the dark limb. The column headed ‘mm’ indicates the minimum aperture required to see the event. There are two occultations of Aldebaran although for the second event in January it is extremely low in the sky. The Moon finds itself among the Hyades again on January 19/20 so there are a large number of events, many of which fall outside our criteria. Times are for Greenwich and in UT. 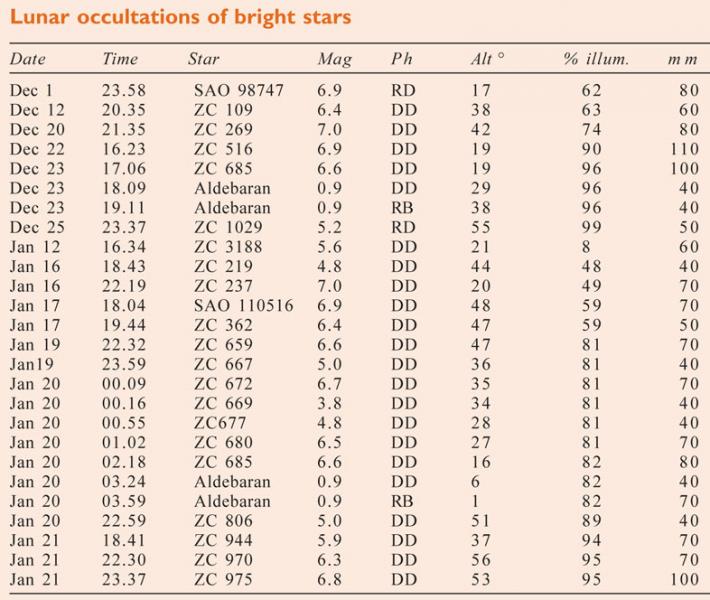