Two comet outbursts in one week!

Like London buses, after monitoring two particular comets for rather a long time using the Las Cumbres Observatory Global Telescope (LCOGT) network, two outbursts came along in quick succession. Specifically, both comets were discovered to have outburst within 6 days of each other. First one along came Comet 17P/Holmes on January 28, when it was found to have brightened within a few hours to about 30x its normal intensity in images taken using the 2.0-m f/10 Faulkes Telescope North on Haleakala, Hawaii. Then on February 3, Comet 29P/Schwassmann-Wachmann also appeared to have jumped in brightness some 40-fold.

On 2007 October 24, Comet Holmes was seen to undergo a dramatic mega-outburst amounting to 13-14 magnitudes. Can we ever forget it! This January event was the first marked outburst of this object since that 2007 show-stopper, despite amateur astronomers across the world having kept a close watch on the comet ever since. This new outburst also happened when the comet was only a distance of 8 degrees from its position in the sky for the dramatic 2007 event – quite some coincidence! As to its outburst activity prior to 2007, you have to go back to 1899 July 4 to find a previously observed event of this kind, and of course Edwin Holmes discovered it whilst undergoing a bright outburst in 1892.

After inspecting preview images, I posted alerts to comet observers including a detailed note on the BAA Comets discussion list <comets-disc@britastro.org> at 18:17UT appealing for confirmatory images. By 19:15UT, Nick James in Chelmsford had been able to communicate the first such image followed at 19:57UT by Denis Buczynski who also confirmed the comet was indeed in outburst. Clearly BAA members respond very effectively to observing alerts of this kind.

The outburst, which attained 14th magnitude, appears to have been triggered on January 26 and the subsequent development of the expanding coma was successfully followed over 6 consecutive nights by Richard Miles and Eric Watkins using the LCOGT facilities, shown below. 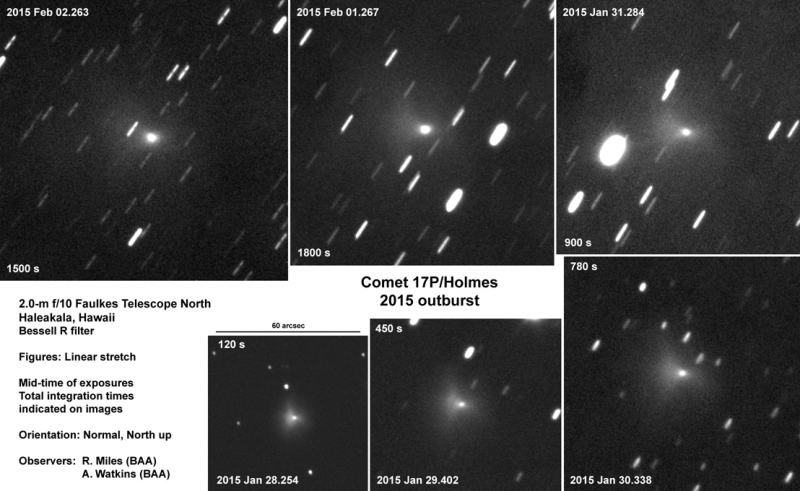 The second alert was sent out late on February 3 after images were taken at 18:11UT using the 1.0-m f/8 Ritchey-Chretien telescope of the LCOGT network at Siding Spring, Australia. These showed an object brighter than R magnitude 15 at the location of Comet 29P whereas I knew from observations made by Jean-François Soulier the previous day that the comet had been quiescent at about 18th magnitude. Further LCOGT images were taken later that night from Sutherland, South Africa, and from Cerro Tololo, Chile, which duly confirmed this new outburst: the first of 2015. Comet 29P is the most active comet known in that it outbursts several times per year. Subsequent photometry showed that the comet had brightened to R magnitude 13.9, a 4 magnitude jump.

The BAA Comet Section encourages observers to follow both of these comets as they fade from maximum. It is known that a bright outburst of Comet 29P/S-W often provokes another less intense outburst some 5-15 days later. Unfortunately the comet is currently at a declination of -30 degrees favouring observers in the southern hemisphere, or the use of robotic telescopes, from where it can be seen in the pre-dawn sky. Repeat outbursts of Comet 17P/Holmes have been known, typically arriving 6-8 weeks after the initial event so do watch out just in case.