A galaxy challenge in Leo

Leo is one of the most distinctive constellations in the sky and one of the very few that looks anything like the object it is meant to represent – a crouching lion. The huge backward facing question mark that forms the front end of the lion is particularly conspicuous.

Leo contains numerous galaxies (including 5 from Messier’s catalogue) and is fine galaxy hunting ground for anyone with a medium sized telescope as many are visible in 15cm under a good sky. It also contains a few challenges and one of the toughest – certainly visually – is the galaxy Leo 1 (UGC 5470). Leo 1 is a member of our Local Group – a group of around 60 galaxies which includes the Milky Way and Messier 31. Leo 1 itself is a dwarf spheroidal galaxy lying at a distance of around 820kly.

With a magnitude of 11.2v you may ask why it is such a tough target. There are two reasons. The first is that it is large and with a size of just under 10 x 8 arcmin has an extremely low surface brightness. The second is that as it lies less than 20 arcmin north of Regulus, the mag 1.4 leading star of Leo, its light (or faint glow) gets drowned out by its brilliant line of sight neighbour. You know an object is likely to be a challenge when it wasn’t discovered by William Herschel and Leo 1 had to wait until the Palomar Observatory Sky Survey (POSS) came along in 1950 and it was noticed on the plates by Albert George Wilson ( the same astronomer was co-discoverer of the even more difficult Leo II).

Lying so close to Regulus it must be the easiest object at which to point a telescope (its actual coordinates are RA 1h 8m 27.4s and Dec. 12deg 18arcmin 27arcsec). I have only ever seen Leo 1 visually from 7,000 feet up in Tenerife with a 24.5-inch Dobsonian, and even then it was not a stand out object but more a brighter, almost ghostly glow against the background sky. Because it is so large a low power eyepiece will probably be needed (and a Moon free sky) but be prepared to change power as often a faint object will be visible at one power and totally invisible at another. Also gently move or tap the tube to cause a vibration which aids seeing a change in the background sky glow.

Leo I is also a tricky imaging object because of the proximity of Regulus. The image here was obtained by Grant Privett using a 10-inch f/4.4 Newtonian and the flare is from Regulus (during this imaging session he was fighting dew on all surfaces of the telescope). It would be interesting to know the smallest aperture telescope in which Leo I is clearly visible.  If you observe it successfully do send your observations to the Deep Sky Section. 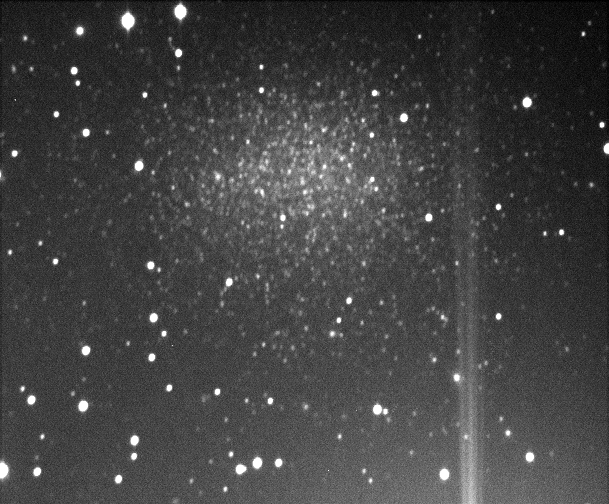