An intriguing object in Serpens

With light summer skies getting ever closer, May is probably the last month for serious deep sky observing before the summer recess. During the first 2 weeks of May the Moon is largely out of the sky (New Moon is on May 6 and first quarter Moon on May 13) and so an ideal time for a challenging deep sky hunt. The quarry is a ring galaxy commonly known as Hoag’s object (PGC 54559) which lies in Serpens.

This galaxy is one of the most intriguing objects in the sky. It was discovered by Arthur Hoag in 1950 when perusing survey plates and at the time it wasn’t known if it was a peculiar galaxy or a planetary nebula. His paper in the Astronomical Journal (1950 Vol. 155) was therefore titled ‘A peculiar object in Serpens.’ It was once thought that the ring might be the result of gravitational lensing, but this was rejected when it was found that both the ring and the nucleus had the same redshift.

Studies and images taken over the last few years – particularly by the Hubble Space Telescope – have confirmed that the object is indeed a galaxy (see image below).These detailed images show that the ring has a clumpy structure and is dominated by young blue stars while the central nucleus is composed of older redder stars. There is still much discussion over how the ring was formed. 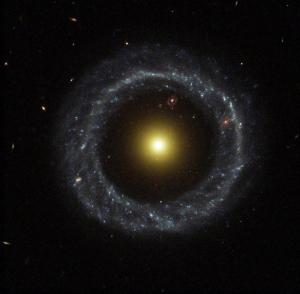 Most ring galaxies are thought to be the result of a collision between a small galaxy and a large disk galaxy and take on a ring shape after the density wave from the collision passes through the pair, but in the case of Hoag’s galaxy no second galaxy is visible. Nevertheless, it is now generally thought that some kind of collision or capture event with another galaxy was the cause of the object we see today. Another puzzle is that if the galaxy really is 2 – 3 billion years old, as has been suggested, why are there not more red stars in the ring.

Serpens (The Serpent) is both an ancient and a confusing constellation as it is divided in two parts – Serpens Caput (the head of the serpent) lies to the west of Ophiuchus and Serpens Cauda (the tail) lies to the east. Ophiuchus himself being the serpent holder. Hoag’s object lies in Serpens Caput at RA 15h 17m 14.4s and Dec +21 deg 35 arcmin 8 arcsec. Lying at a distance of around 600 million light years it has a diameter on the sky of just under 17 arcsec and with a visual magnitude of 16 will be a very tough visual challenge for owners of the largest Dobsonians. There are reports from the USA of it being seen in 1 metre class telescopes (with the core only being visible in smaller instruments) but even then it needed excellent skies. I’m not aware of any observations from the UK.

Nevertheless, it does image relatively easily and the image below was obtained by Grant Privett using a 25cm f/4.3 Newtonian (on a not particularly good night). With Serpens transiting around midnight during the first 2 weeks of May now is a good time to try and observe it. If you succeed do send your observations to the Deep Sky Section.

Ring galaxies are rare beasts so what is particularly interesting with this one is that careful scrutiny of the Hubble image (at about the one o’clock position) shows another ring galaxy visible in the distance – what an unlikely coincidence! 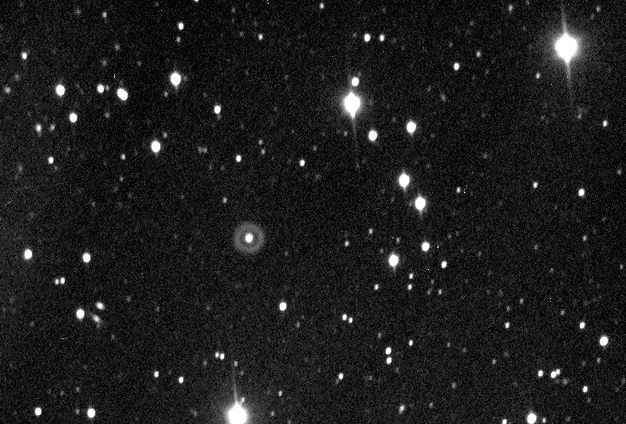