Amateur observations are increasingly integrated into modern professional studies of Jupiter’s atmosphere.  One such ‘pro-am’ collaboration now reports a new type of wave pattern on Jupiter’s fastest westward jet-stream: the most regular wave pattern ever found in ground-based images.  The BAA Jupiter Section and JUPOS team discovered these waves on the South Equatorial Belt (SEB) in amateur images taken from 2010 to 2015, and found a tight relationship between their speed and their wavelength. Infrared observations by Dr Leigh Fletcher and Dr Glenn Orton showed that the waves were at the level of the visible cloud-tops; and Fletcher investigated physical models for the waves. Although the waves do not appear to fit into a known type, he showed that the jet where they arise has conditions right for a specific type of instability.  The waves have appeared in different atmospheric conditions, before, during and after an extensive upheaval known as a SEB Revival.

The wave pattern is reported in a new paper in the journal Icarus, and the preprint is on our web site at:  https://www.britastro.org/node/7718

Also, two new professional papers include maps made from amateur images by Marco Vedovato of the JUPOS.  These papers open a new window into Jupiter’s atmosphere by using radio and infrared observations by large telescopes to map ammonia abundances across the planet.  Ammonia on Jupiter condenses into clouds and plays a role in the weather, like water on Earth.  The amateur maps in visible light enabled the authors to identify the features which were enriched or depleted in ammonia. In particular, both groups found that the familiar dark ‘projections’ or ‘hot spots’ on the north edge of the Equatorial Zone are accompanied by broad ammonia-rich upwellings in the adjacent bright regions of the Equatorial Zone.  This confirms the theory that these features represent planetary waves called Rossby waves.  Thus, ground-based professional astronomers are now beginnng to look directly at some of the processes driving Jupiter’s weather.   Press releases from the two teams (not showing the equatorial waves, but showing impressive images which illustrate their techniques) are at: 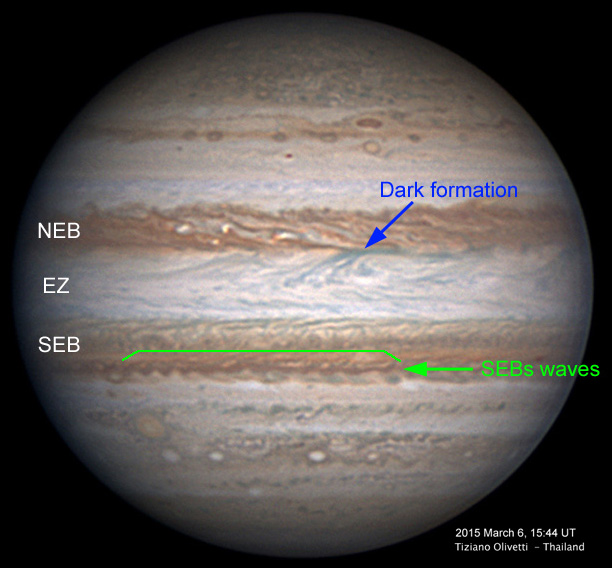