Although this object was picked up by the Pan-STARRS survey telescope on Haleakala, Hawaii some 3 weeks ago, much excitement has been engendered at NASA and the Jet Propulsion Laboratory in the last 24 hours when it was realised that object ‘2016 HO3’ could be an attractive target for a space mission in that it could be reached in as little as 65 days flight time returning after a round trip lasting some 146 days or so. Details can be found here:

What makes 2016 HO3 special is that it is the first asteroid found to occupy an orbit that makes it appear as a quasi-satellite of our planet. The body, which probably measures somewhere between 30 and 130 metres across, is too far away to be considered a natural satellite of the Earth, akin to our Moon. No such satellite has ever been found. Its unusual orbit means that it currently reaches opposition in April-May every year although it only attains magnitude 21 or so at that time. In spite of its faintness, BAA member, Peter Birtwhistle imaged it just 17 hours after it was first detected on April 27 and then again the following night. Today, Peter Veres of the Pan-STARRS team successfully identified the object on images taken by Pan-STARRS in 2012, 2013, 2014 and 2015 enabling an accurate orbit to be determined.

According to Paul Chodas of JPL, the motion of 2016 HO3 is mostly controlled by the Sun’s gravity but that the Earth nudges it just enough to hold it in a libration cycle, much like Jupiter’s gravity holds the Trojans in their orbits. Paul has prepared a diagram of its position relative to the Earth during the interval 1960-2020 showing that it librates back and forth within the envelope shown in the image, staying bound to this region for the entire time.

NASA has been hoping to identify potential targets for manned missions to asteroids using their Space Launch System (SLS) as stepping stones for a possible manned mission to Mars. 2016 HO3 may very well be such a target unless the object is spinning too fast to permit a safe spacecraft rendezvous with the body. 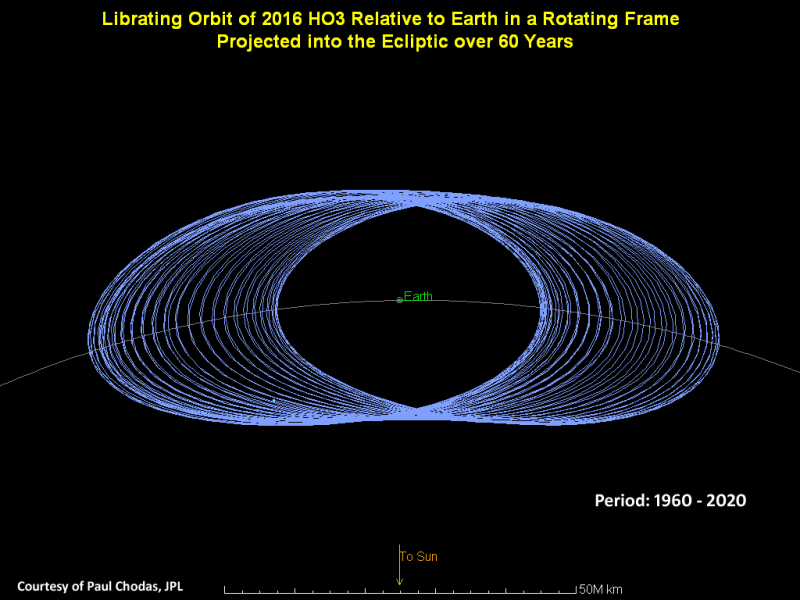 As a quasi-satellite, its distance from the Earth ranges from about 16 million to 45 million km as it dances backwards and forwards: both orbiting the Sun together once per year. Seen from the Earth, 2016 HO3 therefore occupies the same region of the celestial sphere. This is well shown in the following chart of its orbit projected on the sky prepared by Bill Gray of Project Pluto. It shows the track of the asteroid over an interval of almost 15 years describing a ‘figure of eight’ motion centered on the direction of the constellations of Virgo and Leo. 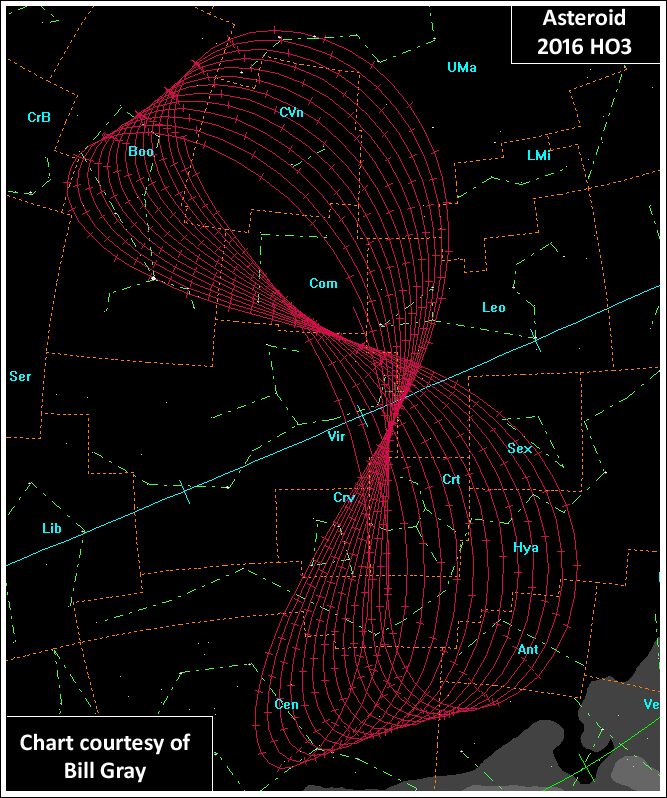