A fireball has been detected on Jupiter, on 2016 March 17 at 00:18.5 UT, in videos taken by amateur observers. It was first reported by Austrian observer Gerrit Kernbauer; his video is here:

It was confirmed by Irish observer John McKeon, on reviewing his video from that night, which is here:

The fireball occurred more-or-less on the limb, on the NEB, and lasted about one second.

Like the three previous jovian fireballs, this one did not leave a visible mark. These events are impacts by asteroidal or cometary objects a few metres across, which explode in the upper atmosphere.  They comparable in energy to the Chelyabinsk impact in Russia.

Two such events were detected in 2010 and one in 2012.  None had been recorded in the intervening years, until now, but this event shows that they can still occur.  On the other hand, the DeTeCt project (by Marc Delcroix) has not yet found any new events in 44.95 days’ worth of videos systematically screened.  Anyone taking videos of Jupiter is encouraged to contribute to this project by downloading the DeTeCt software from: 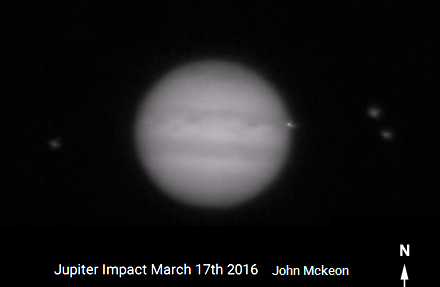