Hubble’s Variable Nebula. A deep sky object that does something

Deep sky objects have a reputation for not changing their appearance. A supernova may flare up in a distant galaxy from time to time and detailed images of the Crab Nebula taken a few years apart can show it is expanding, but on the whole the majority of deep sky objects appear the same from night to night.

There is however a small minority of objects that do change and these are the variable nebulae. Several are known (and there are almost certainly more to be discovered) and the BAA Deep Sky Section has a programme to monitor changes in them. The brightest and easiest to observe is Hubble’s Variable Nebula – NGC 2261, which is well placed for observation during the next month or so (provided the Moon is out of the way). The nebula itself was discovered by William Herschel in 1783 but its variability was only noticed by Edwin Hubble in 1916 while working at Mount Wilson Observatory. It also has the distinction of being the first object to be photographed by the 200-inch Hale Telescope on Mt Palomar. Don’t expect to see change on a daily basis, but certainly over a few months you should notice differences in the pattern of nebulosity within the fan and/or small changes in the shape of the fan itself.

Variable Nebulae are reflection nebulae that are associated with pre main-sequence stars. It is the variability of these stars, combined with the often erratic behaviour of an accretion disk of gas and dust surrounding the star that causes the variability. In the case of NGC 2261 it is the variable star R Monocerotis (whose variability was discovered by Schmidt in 1861) that acts as the power house.

Hubble’s nebula was studied extensively by Carl Lampland at Lowell Observatory between 1919 and 1951 and its behaviour is now relatively well understood, but for anyone wanting to get involved in this fascinating area of astronomy it is the ideal object to start with. It lies in Monoceros at RA 6hr 39min 9.5sec and Dec. 8deg 44arcmin 52arcsec (see chart) so over the next few weeks culminates around 22:00UT. The image shown here was taken by Mike Harlow in 2013 January 7 using Sierra Stars 0.81m reflector. Most people nowadays image these nebulae to make spotting small changes easier, but HVN it is also an easy visual target and in a 15cm reflector appears as a small comet shaped patch around 3 x 1 arc minutes in size.

If you get bitten by the Variable Nebula bug there are others you can hunt down – Hind’s Nebula, Gyulbudaghian’s Nebula, McNeil’s Nebula and NGC 6729 (in Corona Australis). With the exception of NGC 6729 these are all (usually) faint and imaging is essential to monitor real change. Please send your observations to the BAA Deep Sky Section who will be delighted to receive them and to give advice on regular monitoring. 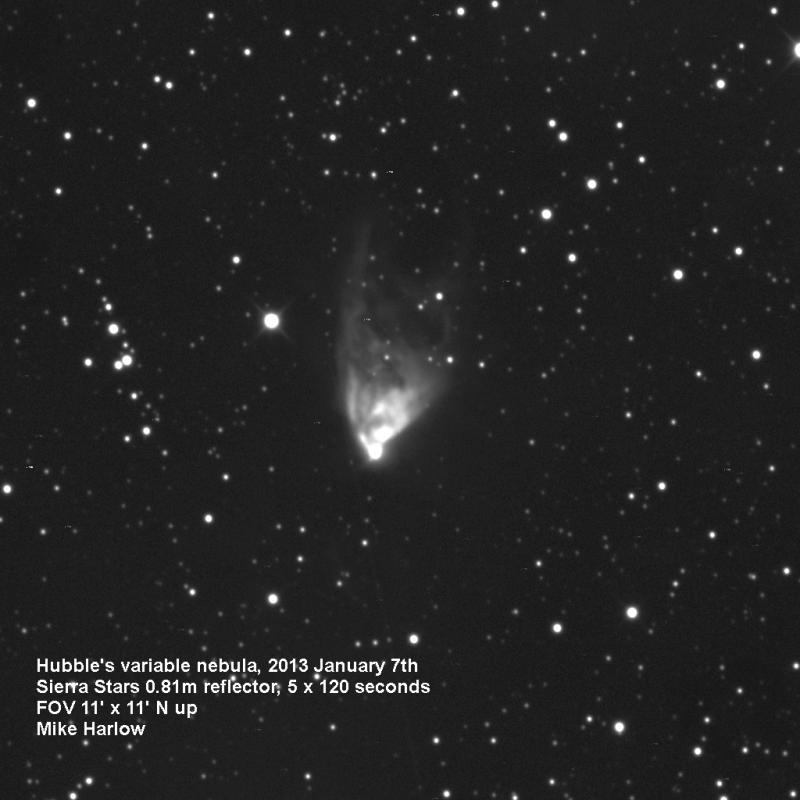