With Gemini riding high in the late February evening sky it’s reasonable to think of M35 as a winter or early spring cluster, but it was actually first observed by Charles Messier in August (1764 August 30) – it would then have been low in the east in the early morning hours (astronomical twilight on that date from Paris was 04:07 and there was no Moon around to interfere). He described it as ‘A cluster of very small stars near the left foot of Castor’. However, like so many Messier objects it was not discovered by him, that distinction seems to have gone to the Swiss astronomer de Cheseaux in 1746, but it is now regarded as one of the finest open clusters in Messier’s catalogue. Lassell – admittedly observing with a 24 inch reflector – called it ‘A marvellously striking object: no one can see it for the first time without exclamation…’ Smyth, Webb and Rosse all expressed similar sentiments.

The chart below shows the position of M35, which lies just over 2 degrees north-west of Propus – Castor’s left foot – at RA 6h 10m and dec +24deg 20arcmin 37arcsec. With a diameter of around 30arcmin and containing numerous stars of magnitude 7.5 to 10 it has an integrated magnitude of 5.1. Lying at a distance of 2,200 light years the cluster is clearly visible in binoculars (The Victorian amateur astronomer T W Webb regarded it as a naked eye nebula) although it really needs a telescope in the 20 to 30cm class to do it justice. To the visual observer the numerous stars will then form beautiful patterns of curved chains which I always find are only visible through the eyepiece and are not at all obvious when looking at images.

Careful scrutiny of M35 in a low power eyepiece will also show a nebulous patch lying to the south-west. This is the magnitude 8.6 open cluster NGC 2158 (a William Herschel discovery from 1784). Although it looks faint and tiny compared to M35 it is in fact similar in size and its visual inferiority is only due to its greater distance from us. It is not associated with M35 and its location within its big brother is purely a line of sight effect. 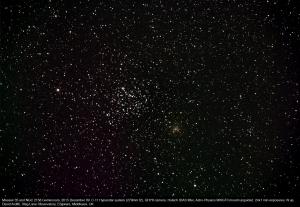 The image of M35 (with NGC 2158) shown here was taken by David Arditti from his observatory in Stag Lane, London, using a C-11 Hyperstar plus QHY8 camera and IDAS filter. The exposure was 24 minutes. North is up.