M67 the other open cluster in Cancer

Cancer, the mythical crab that attacked Hercules in his fight with Hydra the water snake, is an inconspicuous zodiacal constellation. Luckily however it is sandwiched between the bright stars Procyon, Regulus and Pollux, which gives the observer from less than pristine skies some chance of finding it. In fact Cancer is unusual in that its brightest deep sky object, the open cluster M44, has an integrated magnitude that is brighter than any of the stars within the constellation and often M44 is the only part of Cancer that can be seen with the naked eye.

There are however 2 open clusters in Cancer with Messier designations and the superiority of M44 often means that the other cluster, M67, is ignored. This is a shame as it is a beautiful object and would probably be much better observed if it didn’t have its brighter rival to contend with. Containing around 500 members it appears slightly under 0.5 degrees in size with many of its stars arranged in attractive chains.

M67 (NGC 2682) lies towards the south of the constellation (see chart above) and although some observers claim it can be seen with the naked eye, with a listed magnitude of 6.9 this seems highly unlikely from UK skies. Like many objects with a Messier designation it was discovered before Messier himself observed it and is generally attributed to the German astronomer Johann Gottfried Kohler around 1779, with Messier making an independent discovery the following year. It is an old cluster, in fact one of the oldest known, with an estimated age of between 4 and 5 billion years. That it has survived so long without being gravitationally torn apart is probably due to its extreme distance from the galactic plane. It contains a large variety of stars, from highly evolved red giants to white dwarfs and blue stragglers. Andrea Tasselli’s RGB image shown below (14x30s) taken through a 200mm Mak-Cass and SXV-H9 camera combination from Lincoln shows some of these colours. The cluster lies at RA 8h 52m and Dec +11deg 46arcmin, putting it around 1.5 degrees west of mag 4.3 alpha Cancri. 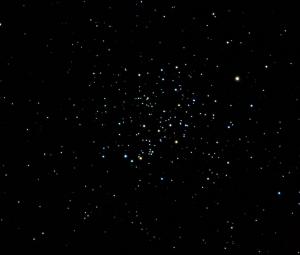