Despite having a high northerly declination Lynx is probably a constellation that does not feature on the observing lists of many people. In fact under some urban skies it may be invisible as its brightest star is only 3rd magnitude. The constellation was created by Hevelius in the 17th century and fills the gap between Ursa Major, Gemini and Auriga. Nevertheless, what it lacks in bright stars it makes up for in interesting deep sky targets and one of the best is the planetary nebula Jones-Emberson 1.

Jones-Emberson 1 is an ancient and large planetary that images relatively easily with narrow-band filters. However, like many nebulae that escaped detection by early visual observers it can be a difficult object through the eyepiece. It was discovered on photographic plates in 1939 from Harvard Observatory where Rebecca Jones, its co-discoverer, also discovered another planetary that bears her name – Jones 1in Pegasus.

JE-1 lies at RA 07h 57.8m and Dec +53deg 25arcmin. It has a quoted diameter of 400 arcsec and a visual magnitude of 12.1, a size / magnitude combination that gives it a very low surface brightness and makes it such a difficult visual target. It is thought to lie at a distance of around 1,600 light years. For star-hoppers wanting a challenge the best starting point is probably mag 3.5 omicron U.Ma from where there are plenty of mag 6 and 7 stars forming recognizable pattern leading to the planetary 8.4 degrees to the south-west. For some years after its discovery there was confusion between its position and designation with 2 small galaxies NGC 2474 and NGC 2475 which lie half a degree to the south. The matter was resolved by Ron Buta who wrote about it in the 1981 April issue of Sky & Telescope magazine. 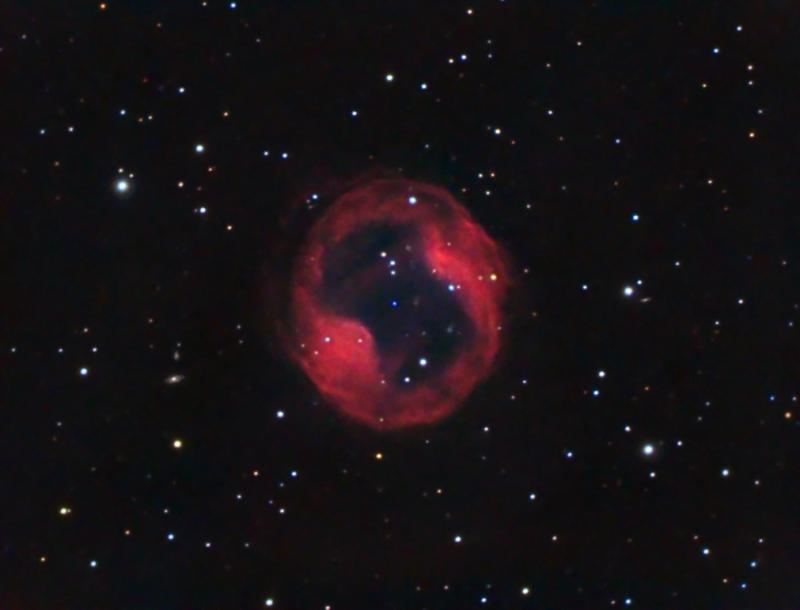 The image of JE-1 shown here was obtained by Adrian Jones from Maidenhead, Berkshire using a 250mm LX200 at f/5.5 and Atic 16HR CCD. Exposure was 144 minutes RGB plus 140 minutes H-alpha. The magnitude 16.8 white dwarf central star is clearly visible in the image.

Visually JE-1 is a very challenging object and although there are reported sightings in quite small apertures, I find a telescope in the half-metre class is needed. Even then it appears featureless and visible only as a large C-shaped patch of faint nebulosity. An OIII filter gives a slightly brighter view – although the term brighter is very relative here. A UHC filter with its wider band-pass shows a few faint stars embedded in the nebula.