In the north, Ursa Major on the east side of the meridian, continues to climb towards the zenith. Below it lies its smaller sibling along with the dragon that winds between them. The fact that some of the summer groups are starting to appear on the horizon can be taken as a sign that better weather is soon to come. Deneb, in Cygnus, and Vega, in Lyra are both now visible and next to them Hercules is just rising. To the west of the meridian we find Cassiopeia and Cepheus, and below them the small and faint constellation of Lacerta, the lizard that contains the open cluster NGC 7243 otherwise known as Caldwell 16. 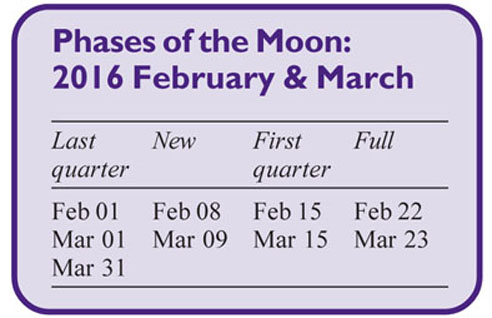 Turning to the east we find that the bright star Arcturus is already at an altitude of 20°, whilst above it are the faint groups of stars that form Coma Berenices and Canes Venatici. According to mythology the latter represents the hunting dogs that Boötes, the herdsman, is holding. The brightest star, Cor Caroli, is a wide double whose components are magnitudes 2.9 and 5.6. The name means ‘Charles’s Heart’ although there is some debate about which King Charles it actually refers to.

Within the borders of Canes Venatici is M3, the second best globular cluster visible from the northern hemisphere, which will need 100mm aperture at least to begin to resolve individual stars. Coma Berenices is another faint group, but this one’s claim to fame is that it contains the north galactic pole within its boundaries. When we look at Coma we are looking out of the galaxy on a line that is perpendicular to the galactic plane. This means there is very little obscuration from gas and dust, allowing us to see a large number of galaxies that lie beyond our own. There is also the open cluster Melotte 111, which is more than 5° across, and the globular M53 at magnitude 7.7 which needs a large instrument to resolve it fully. 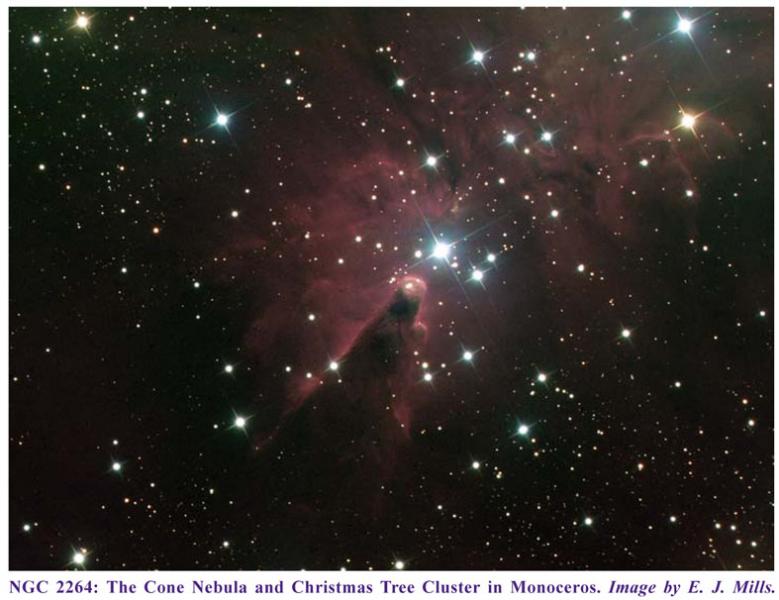 Towards the south the brilliant winter constellations have already culminated leaving Cancer, and below it the head of Hydra, on the meridian. If you live in the south of England and have a good horizon, now is the time to look for Antila (the air pump), Pyxis (the compass) and the northern part of Puppis (the poop deck). Despite the fact that the winter groups are past their best they are still prominently positioned if you wish to observe the many jewels in that area. There are a large number of open clusters besides those that get the lion’s share of attention like the Pleiades and Hyades. Monoceros has many such objects, some of which like M50, NGC 2232 and NGC 2244 are easily seen in binoculars, as is M47 just across the border in Puppis. Also within the realms of the Unicorn is the open cluster NGC 2264 (the Christmas Tree Cluster) that is associated with the nebulosity we know as the Cone Nebula.

In the west Capella shines brilliantly some 55° above the horizon whilst within the confines of Auriga the triplet of open clusters M36, M37 and M38 are at a similar altitude. Below Auriga lie Taurus and Perseus, and in turn below them Triangulum and Aries, which will soon be lost to view.

Mercury reaches greatest western elongation on February 7, although this will be a poor apparition as seen from the UK with the planet rising a little over an hour before the Sun on that day. At the start of civil twilight (Sun 6° below the horizon) Mercury is just under 4° high in the south east. The smallest planet then moves back into the clutches of the Sun and reaches superior conjunction on March 23.

Venus is still a morning object but is becoming increasingly difficult as it moves into the twilight. By March 1 it is just 5° above the south eastern horizon as the Sun rises, bringing to a close this period of visibility. Superior conjunction however does not occur until June 6.

Mars is a morning object rising at 01:30 in Libra at the start of February. It remains there until mid March when, moving direct, it crosses the border into neighbouring Scorpius, almost reaching Ophiuchus by the end of the month. The red planet brightens from +0.8 to -0.5 and grows in apparent size from 6.8 to 11.8 arcseconds during the period in question as it heads towards opposition on May 22.

Jupiter begins the period rising at 20:30 but by the end it rises before sunset. It reaches opposition on March 8 when it shines at mag -2.5 and culminates a few minutes after midnight. It crosses the meridian at an altitude of almost 45°, but make the most of it because subsequent oppositions see the planet culminating at 33° in 2017, 23° in 2018 and just 16° in 2019 before a recovery takes place.

Jupiter achieves a maximum apparent equatorial diameter of 44.5″, whilst from pole to pole it measures 41.5″ which demonstrates how oblate the planet really is. It reached its first stationary point in early January, so it is currently moving retrograde, which will continue until early May.

Saturn is a morning object rising at 04:00 at the beginning of February and 00:30 by the end of March. It spends most of this period travelling direct in Ophiuchus but reaches its first stationary point on March 25 after which it travels retrograde until mid August. Its brightness increases very slightly to +0.4 and its angular diameter grows to 17.3″. The ring system continues to be very well presented towards Earth with the planet’s north pole tilted towards us by just over 26°. Saturn will reach opposition on June 3.

Uranus is still resident in Pisces and moderately well placed although its period of visibility is shortening as it approaches solar conjunction in early April.

Neptune is in Aquarius at the start of the period and sets two hours after the Sun. However, the Sun’s apparently swift eastwards motion will quickly engulf Neptune, and it meets solar conjunction on February 28.

(1) Ceres and (4) Vesta. Ceres is in southern Aquarius and too close to the Sun for observation. Vesta, in Cetus, passes close to Uranus within the first few days of February when it sets six hours after the Sun. By the end of March it has visited Pisces and Cetus again briefly before crossing the border into Aries.

In the table I’ve listed events for stars of magnitude 7.0 or brighter although there are many others that are either of fainter stars or those whose observation may be marginal due to elevation or other factors. DD = disappearance at the dark limb, whilst RD = reappearance at the dark limb. There is a column headed ‘mm’ to indicate the minimum aperture required for the event.

Just two graze occultations occur during the period in question, both of which seem to be very challenging. Times given are in UT. Observers are encouraged to attempt these events and submit results, negative as well as positive, to Tim Haymes at occultation@baalunarsection.org.uk. More details are available in the current BAA Handbook. 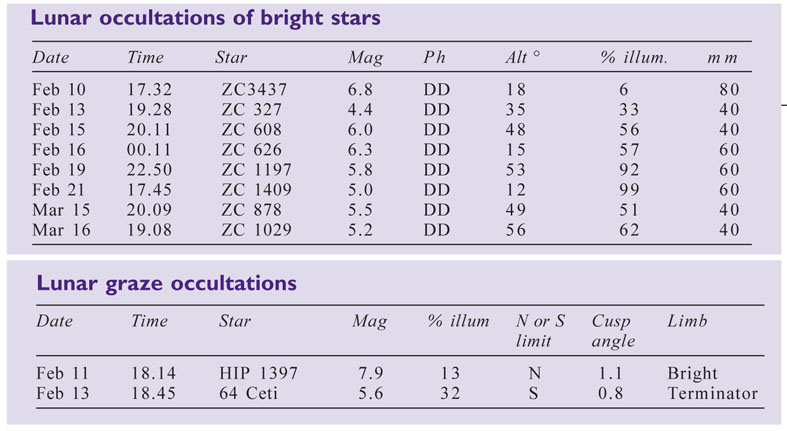